This post on the Eastman Blog features a guest contributor: Andrew Winslow, BM ’17. Andrew is a harpist from Irvine, CA, studying Applied Music and Music Education at Eastman. Andrew currently serves as the President of the Eastman Students’ Association.

As President of the Eastman Students’ Association, I recently had the privilege of being a delegate for the Eastman School of Music at this year’s Association of College Unions International (ACUI): Region VII conference. The conference is held annually in each region of the country, and this year’s was hosted by Temple University in Philadelphia. As a student leader, attending an ACUI conference is an invaluable experience, because you become immersed in an environment where you can attend professional development workshops that facilitate dialogue between administrators and student leaders from peer institutions. I had the opportunity to participate in many workshops as well as teach a seminar in partnership with Eastman’s Assistant Director of Student Activities and Engagement, Alyssa Shoup. My experiences from this year’s ACUI conference have given me a plenitude of knowledge that I will utilize to make the already vibrant student life we have here on campus “ever better.” 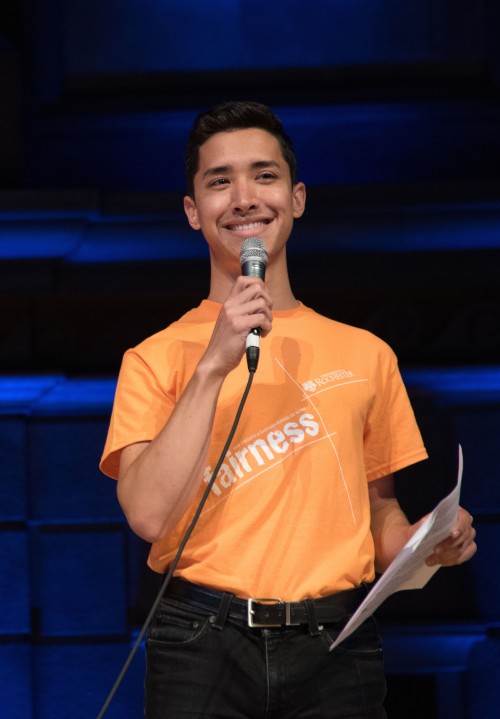 Andrew as the emcee for the Celebrate Diversity Event, for which Eastman won an award at the ACUI conference.

Out of the numerous workshops I was a part of, there were three I thought were most applicable to the Eastman Students’ Association and the vision we have for its future. The first workshop was But . . . We Have Always Done It This Way, which focused on student organizations’ influence on campus culture and implementing change on campus. While it is important to respect campus tradition, it is equally important to dissect life on campus, analyze how everything is working, and look for areas to improve upon. As a musician, I perceive this as the transformation artists go through from the start of their career to its end. In reviewing the work of any pop artists or classical music composers that stayed relevant during their career, it is evident that although they respect their greatest hits or magna opera, each album or piece has a new sound and change in style, color, or statement. I would encourage student organizations to follow the same suit, and always be looking for ways in which they can improve upon campus life to leave a meaningful, positive impact on the student body and experience.

The second workshop that was most applicable to Eastman was Find Your Marketing Inspiration Everywhere. The workshop focused on how to efficiently and effectively grasp the attention of students to attract them to campus events in a world where continuously evolving technology, social media, and communications are becoming a distraction. We explored non-traditional marketing and techniques that are successful on the campuses of our peer institutions, and the Eastman Students’ Association will be taking full advantage of the newfound creative, out-of-the-box techniques.

The final workshop that stood out as most beneficial for our Students’ Association was Student Involvement Roundtable – Programming & Student Government. In this discussion group, delegates from other universities’ Student Associations shared tricks of the trade, as well as what it is like to be involved at their institutions. At Eastman, being involved in the Students’ Association is more than just putting on events. It is providing a support structure for student activities that will enhance and enrich student life and experiences. It is to act as a liaison between the undergraduate students and the administration; to promote the cultural, social, and physical well being of undergraduates; to protect the academic and non-academic rights of students; to ensure quality educational standards, facilities, and teaching methods within the school; and to provide a forum for the expression of student views and interests. All of these aspects of being a student leader play vital roles in stimulating a welcoming, inclusive, and safe environment for their voices to be heard and respected on a campus they revere as home.

The conference ended with a banquet and awards ceremony where ACUI recognized and selected a small number of institutions that were making exemplary contributions to their campuses’ student life. The Eastman School of Music was honored to take home two awards: the Outstanding Community-Building Program Award and the Dr. Theresa D. Drummond Memorial Award. These awards were in respect to the Eastman Students’ Association – Eastman Programming and Involvement Council’s Freeze Fest community weekend, held last winter, as well as the Eastman Office of Student Life’s cross-campus, collaborative New Student Orientation concert Celebrate Diversity, which was held in August during Freshman Orientation. Here at Eastman, we believe that higher education is like a train running on two parallel tracks. One track is purely academic, while the other is the student experience and everything encompassing student life. Both tracks are equally important, but without both, the train cannot operate successfully. ACUI’s recognition of our dedication and significant contributions to the campus environment is an encouraging reminder that our train is travelling in the right direction.