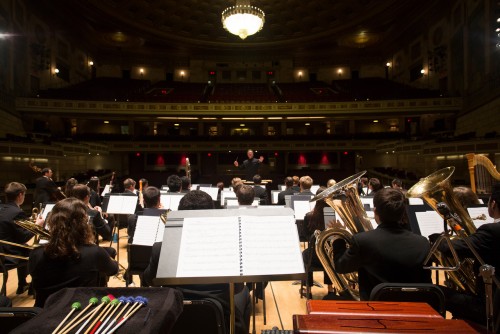 The Eastman Wind Ensemble, under the direction of Professor Mark Davis Scatterday, presents their third concert of the 2015-2016 season on Wednesday, November 4 at 8 p.m. in Kodak Hall at Eastman Theatre. The concert will feature a pair of prominent works by composers Olivier Messiaen and John Mackey.

Messiaen’s Et exspecto resurrectionem mortuorum (And I await the resurrection of the dead) is considered a cornerstone of the wind ensemble literature and an important work in the composer’s oeuvre. In 1964, Messiaen was commissioned by the French Minister of Cultural Affairs to compose a work honoring the dead of the two World Wars. Messiaen, who was drafted into the French Army and subsequently taken prisoner during World War II, accepted the commission and Et exspecto resurrectionem mortuorum was the result. The work is scored for one of Messiaen’s largest ensembles, featuring woodwinds, brass, pitched cowbells, chimes, six gongs and three tam-tams. Deeply moving and spiritual in nature, the movements are titled by biblical text and Messiaen’s interest in Indian music and bird calls can be heard throughout the work.

For the second half of the program, The Eastman Wind Ensemble welcomes Professor Glen Adsit, Director of Bands at the Hartt School of Music, to conduct John Mackey’s Wine-Dark Sea: Symphony for Band. While Messiaen turned to the bible for inspiration, Mackey turned to the Greeks. In particular, his wife’s interpretation of the story of Odysseus:

After ten years of bloody siege, the Trojan War was won because of Odysseus’ gambit: A horse full of soldiers, disguised as an offering. The people of Troy took it in as a trophy, and were slaughtered. Odysseus gave the Greeks victory, and they left the alien shores for home. But Odysseus’ journey would take as long as the war itself. Homer called the ocean on which Odysseus sailed a wine-dark sea, and for the Greek king it was as murky and disorienting as its name; he would not find his way across it without first losing himself.

The work, set in three movements, calls for an expansive ensemble, featuring harp, prepared piano and many unique percussion instruments. The resultant composition is a substantial work for the wind ensemble filled with the many unique colors, timbres and harmonies that Mackey is so well known for.