Eastman at the Met: An Interview with Radio Host and ESM Alum Mary Jo Heath 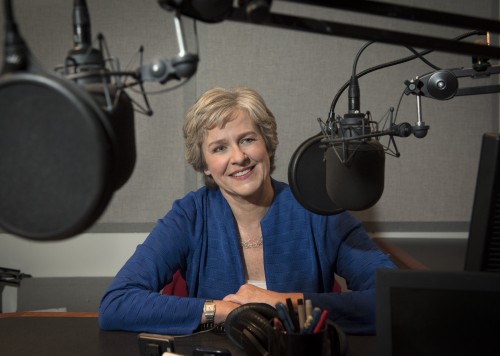 The Eastman School of Music boasts prominent alumni in virtually every field of music: performers, teachers, composers, theorists, conductors, and so on. What better time of the year to celebrate the career paths of our distinguished alumni than the days leading up to Meliora Weekend at Eastman?

As part of a series of blog posts dedicated to interacting with prominent Eastman alumni, I had the opportunity to speak with Mary Jo Heath (PhD ’88) about her career in radio, as she currently serves as the Radio Host for the Metropolitan Opera. This September, Heath became just the fourth full-time radio host in the company’s history. As the new voice of the Met, Heath’s broadcasts can be heard nearly 80 times per season on 570 different U.S. radio stations and 47 more overseas.

John: There are some excellent articles online about your new appointment, namely those published in Opera News and the New York Times. Can you give us your side of the story? How did you become interested in radio hosting and how did you become the new Radio Host for the Metropolitan Opera?

Mary Jo: During my first year at Eastman, there was a posting on the bulletin board in the main hall that WXXI was looking for part-time announcers to work weekends. I got the job and worked every Saturday afternoon for six years. I listened to a lot of Met broadcasts (while grading first-year and sophomore music theory papers), and I usually checked the opera score out of Sibley Library and took it with me – it was a great way to get to know a lots of operas. Along the way, I also hosted my own opera show from time to time and did a lot of fill-in work for the full-timers. Radio really got into my blood, and I kept returning to it in the following 25+ years. Looking back, I guess it was the first stage of my journey to The Met.

John: Please tell us about your musical and your broadcasting endeavors between your time at WXXI in Rochester and your work with the Metropolitan Opera.

Mary Jo: When I was finishing my Ph.D. at Eastman I was offered a couple of college teaching jobs, but I felt like that career direction was not my heart’s desire. So I moved to New York City to get into the music business (I have a very nice husband who has moved four times for me). For two years I worked as a part-time announcer at WQXR in New York and edited classical recordings for a free-lance producer.

Then in 1989 I got a job with the Philips Classics record label as their product / marketing manager for the American market. After two years in the New York office, Philips offered me a job at their headquarters in Holland and we moved to Amsterdam (do I need to mention how much fun it was to live there for eight years?). There I was Product Manager of all new releases – I managed the process all the way from the recording sessions to making a CD ready to hit the stores. After a while, I moved into marketing and new business development.

When Philips closed its doors in 1999, we returned to New York and I became the director of the classical music site for getmusic.com, an on-line music magazine. It folded after two years, so I returned to life as a free-lancer once again. For the next few years I was a music critic for a local paper, did music research for Renée Fleming and Barbara Bonney, and returned to radio work at WQXR and at WSHU in Fairfield, Connecticut. In 2006, I joined the Met as Senior Radio Producer.

John: How did your Eastman schooling prepare you for your career, either as a radio host or your previous positions?

Mary Jo: It all counts – my entire career has been about classical music in one way or another, and everything I have learned figures into it in some way. I still consider myself a student, even though I have been out of school for 25+ years. A big part of the fun has been applying what I know about music in different ways in different jobs.

As senior producer, I created lots of features about music for the broadcasts to enhance the listening experience for the radio audience. Last year I produced a five-minute feature on the musical language of Bartók’s Bluebeard’s Castle which was based on a chapter from my dissertation about the opera – putting it together was serious good fun. I also “drove the boat” during the live shows, and there my product management skills really came in handy: running a big, complicated broadcast in real time with lots of elements, four timers running, and knowing that things could change at any second.

As host, I prepare for each opera from the musical side first. I look through the score, read some history and background, make a lot of notes, sit at the piano and play through lots of it. And I go to rehearsals at the Met – that’s the best thing ever. All this study often becomes the source of discussions with my commentators during the broadcasts (William Berger on the SiriusXM shows during the evenings, Ira Siff on the Saturday matinées). Both of the commentators are great, they know the operas really well and their approach is different from mine. That’s where it gets really fun – exchanging ideas live on the air.

Every season there are a few operas I’ve never seen before – and I love that! At the Met, I have gotten to know works by Shostakovich, Tchaikovsky, Janácek, the Donizetti trilogy about the Tudor Queens, Massenet, and I have to confess, many Verdi operas. I have adored getting to know Verdi better. Having the background to absorb something about these glorious works quickly is really important since we do 80+ broadcasts of 25+ different operas every season, starting in September and continuing into May.

John: What are some aspects of your profession that listeners may find interesting or may simply not know about?

Mary Jo: Probably that it takes a lot of work to make it sound completely spontaneous. I love it that people think we turn on the microphones, start talking, and it all works out perfectly (a comment we hear surprisingly often). On the contrary, everything is planned, rehearsed, and timed very carefully to make sure we relay the most important things to the audience and leave time for the station breaks, interviews, etc. Ira Siff delivered his commentary points for all of the 2015-16 Saturday radio season in June, and we’ve been putting it together with the synopsis and other ideas ever since. We rehearse each script several times to trim for time, focus on the main points, make sure it’s understandable in a single hearing, etc. 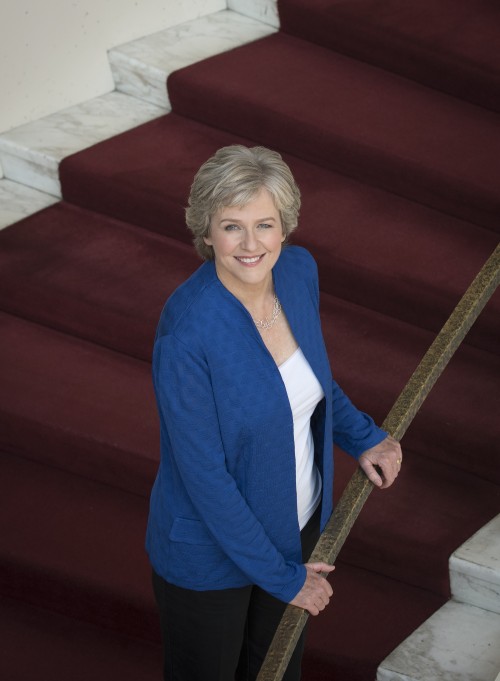 John: In a recent New York Times article, you briefly mentioned taking voice lessons from Renée Fleming (MM ’83), who has recently been appointed a Distinguished Visiting Artist at Eastman. Can you elaborate on this experience?

Mary Jo: Since I had studied piano and voice for a long time when I came to Eastman, I wanted to keep in touch with the “practicing musician” side of life. I signed up for voice lessons and was assigned to a graduate student … a young soprano named Renée Fleming. She was a very good teacher, and we’ve remained friends. It has been such a pleasure watching her grow from young grad student, to young soprano getting jobs, followed by the major ascent to becoming a wonderful artist and a big star. I got to hear her a lot during the 1990s when I was living in Europe – I would arrange my business trips to the major cities while she was there performing and we’d catch up. Our girls have grown up together, and we’ve cheered each other on during our respective journeys. I have loved being in the audience smiling and applauding at many of her greatest performances in the United States and Europe. Lucky me.

John: Is there any additional information or quotes that you’d like to provide us?

Mary Jo: Equal to the education I got at Eastman, are the lifetime friends I met there, so I have to give a shout out to my buddies: Beverly Benda, who’s been singing with the Army for almost 30 years; Betsy Marvin, Eastman’s Chair of Music Theory; and Louise Trucks, now a retired Music Administrator. We have stayed in touch and in recent years have met up for reunions in Savannah, Georgia and Jamaica, and the next trip is in the works. I wish every Eastman student will find such friends, who root for each other in every way as we march towards our dotage!