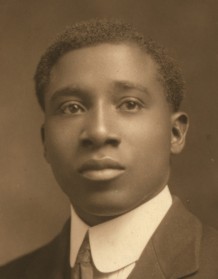 Large-scale, rediscovered works by two composers with ties to Eastman were performed in Carnegie Hall’s recent (and unfortunately its last) “Spring for Music” Festival, dedicated to innovative concerts by North American orchestras. Last Tuesday night, the Rochester Philharmonic Orchestra, Eastman Rochester Chorus, Bach Children’s Chorus of Nazareth College, and many soloists – about 250 performers in all, directed by Michael Christie – presented a concert version of Merry Mount, the only opera by the longtime director of the school, Howard Hanson.

On Friday, the Cincinnati Symphony Orchestra and May Festival Chorus, under James Conlon, presented the oratorio The Ordering of Moses by Robert Nathaniel Dett (1882-1943; pictured above), who received a master’s degree from Eastman in 1932 and was a prominent teacher and choral conductor at African American colleges.

New York Times critic James R. Oestreich said of Merry Mount “The workmanship is remarkable for a first-time (only-time) opera composer; inspiration of lasting import is another matter. Nevertheless … the 250 or so performers gave it all it was worth.” The Times‘ Anthony Tommasini had kinder words for the “biblical folk scene” The Ordering of Moses, whose premiere in Cincinnati in 1937 was a major breakthrough for a black American composer: “Trying something difficult, Dett blended spirituals, elements of folk music, late Romantic richness, and and stretches of operatically charged writing … Dett folded these disparate styles into music that speaks in his distinctive, personal voice.”