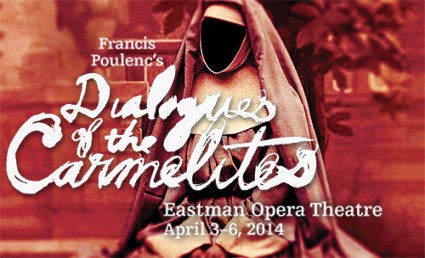 Is it possible that we die “not for ourselves alone, but for each other”? This is one of the questions at the heart of Francis Poulenc’s Dialogues of the Carmelites, this French composer’s most ambitious work and one of the great 20th-century operas. Set during the French Revolution’s Reign of Terror, the opera tells the true story of a convent of Carmelite nuns who decide to die on the guillotine rather than renounce their faith.

Eastman Opera Theatre, which has presented this work several times in the past, opens its new production of Dialogues of the Carmelites, directed by Assistant Professor of Opera Stephen Carr, tonight; it runs through this weekend in Kodak Hall at Eastman Theatre. Musical director Benton Hess will conduct the Eastman Philharmonia. For full information about the opera and buying tickets, click here.

This production of Dialogues of the Carmelites is dedicated to the memory of Gerald Lee, a longtime pianist and repetiteur with Eastman Opera Theatre, who died last summer. Eastman’s Head of Opera, Steven Daigle, shares his memories in this appreciation of Lee.