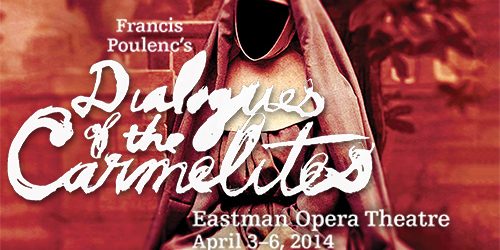 The Voice and Opera Department has dedicated the production of Dialogues of the Carmelites to the memory of Gerald Lee, who for more than 30 years worked with performers to prepare all aspects of music scores for every opera production. Mr. Lee passed away last summer.

During his 33 years of service at Eastman, he prepared students for every opera that was produced within the opera program. By conservative estimates, he participated in over 120 lyric theater productions. For each of these productions, he worked individually and in groups with the cast to prepare all aspects of the music score (learning notes and rhythm, lyric diction, style practices, and assembling ensembles). Jerry would also play for weekly staging rehearsals. For any given production, he would easily give more than 100 hours of his time and talent in musical preparation.

Written by Francis Poulenc in the mid-20th century, the work addresses themes of fear, faith, sacrifice, and redemption in a community of nuns facing the uncertainties of the French Revolution. The opera has been widely praised for its lyricism and poignant harmonies, lovely melodies, and motifs that reflect the characters, reappear throughout the opera, and hauntingly foreshadow the tragic end.

In Dialogues of the Carmelites, timid aristocrat Blanche de la Force seeks refuge from the turmoil around her. But from the time she arrives at the Carmelite convent, she’s met with the challenges of the real world, beginning with the emotionally wrenching death of the Mother Prioress. Running away from the threat of arrest and execution, Blanche finds the courage and strength at the end to rejoin her religious sisters.

The opera also delves into the characters of Mother Marie, who conflates her pride with her desire for martyrdom, and of Sister Constance, a bubbly and optimistic friend to Blanche who is overcome when facing death.

“Dialogues of the Carmelites, though composed relatively recently, historically speaking, has earned a permanent place in the regularly performed operatic canon for many reasons,” said Stephen Carr, Acting Head of Opera Theatre at the Eastman School of Music and director for the upcoming production. “Aside from its gripping score which, I can tell you, slowly seeps under your skin, this is truly compelling and complex theatre. Its structure is unique, with shorter scenes of sung ‘dialogue’ connected by equally eloquent musical interludes. As a director, I always hope that an audience will leave the theatre at the end of a performance somehow different from the way they entered it. Sometimes their spirits have been lifted, or they’ve experienced some kind of introspection, or insight, or newfound empathy . . .  Dialogues will mean different things to different people, but it is an experience that no one, audience or artist, walks away from, unchanged.”

The opera is based on a memoir by one of the survivors of a group of nuns who defied anti-religious decrees during France’s Reign of Terror.  Two rotating casts of singers from the Eastman School of Music take on the lead roles in the Eastman Opera Theatre production under the musical direction of conductor Benton Hess.

To help prepare for their roles, the singers each researched the life of the real monastic nun they will be portraying onstage. They also visited the local Discalced Carmelites of Rochester, getting a rare glimpse into the daily cloistered life of the nuns.

Dialogues of the Carmelites will be presented at 7:30 p.m. on Thursday, April 3, Friday, April 4, and Saturday, April 5; with a 2 p.m. matinee on Sunday, April 6.  The production will be staged in Kodak Hall at Eastman Theatre.  Pre-performance talks will be held on Friday, Saturday, and Sunday one hour before the start of the opera in the Ray Wright Room (Room 120) of the Eastman School of Music. Tickets are $25 for the general public, $35 for reserved box seats (discount with UR ID), and are available at the Eastman Theatre Box Office, 433 East Main St., 585-454-2100.