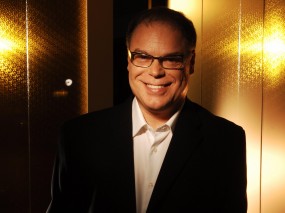 Jeff Tyzik, the Rochester Philharmonic Orchestra’s Principal Pops Conductor, is also an Eastman grad (BM ’73, MM ’77). A prolific composer, Jeff pays tribute to a number of “Eastman Legends” in his recent work Trilogy on Themes by Howard Hanson, which will be performed by the Eastman Wind Ensemble next Wednesday night, April 30,at 8 p.m. in Kodak Hall at Eastman Theatre. The trilogy consists of a March (for Donald Hunsberger), a Ballad (for Warren Benson), and a Scherzo (for Samuel Adler), all based on a theme by another famous Eastman name: the school’s long-time (1924-1964) director, Howard Hanson. (Click each man’s name for information about him.)

Wednesday night’s “Mostly Tyzik” concert, conducted by Mark Davis Scatterday, also features Eastman faculty soloists. Jeff’s Trombone Concerto will be performed by Mark Kellogg, his percussion concerto RIFFS by Michael Burritt, and the “Tango 1932” from his CityScape by saxophonist Chien-Kwan Lin. In addition you’ll hear Burritt perform his own composition Duende. The Tyzik works will be recorded for release later in the year.