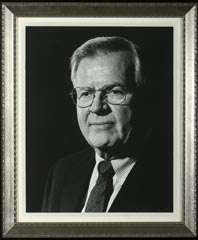 Donald Hunsberger’s attention to musical expression and detail has long distinguished his approach to music of America’s past, as well as to music of today. From 1962 until his retirement in 2002, he was professor of conducting and ensembles at Eastman. During his 37 years as conductor of the School’s acclaimed Eastman Wind Ensemble, Dr. Hunsberger premiered more than 100 compositions and maintained a repertory ranging from the 16th century through contemporary works by Schwantner, Colgrass, and Husa, among others. An international authority on wind band repertory and performance practices, Dr. Hunsberger has conducted and lectured throughout Japan and Southeast Asia, England, Sweden, Canada, Spain, Norway, Belgium, and Israel. He led the Eastman Wind Ensemble in more than a dozen recordings, including a special, 3-CD box released by Warner Brothers Publications for the Wind Ensemble’s golden anniversary in February 2002. His work with Wynton Marsalis and the Ensemble is featured on Carnival, a CBS Masterworks recording which reached #1 on Billboard’s Classical CD Chart in 1987 and was nominated for a 1987 Grammy Award. The Sony Music Foundation, Inc. and Eastman Kodak Japan sponsored the Wind Ensemble, under Dr. Hunsberger’s direction, on seven extraordinarily successful tours of Japan. Dr. Hunsberger, who received bachelor’s, master’s, and doctoral degrees from Eastman, has conducted more than two hundred performances with more than 45 major symphony orchestras, including the National Symphony Orchestra, and the Houston, San Francisco, Utah, and Vancouver symphony orchestras, among others.