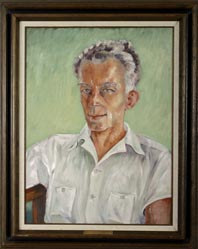 English-American conductor Guy Fraser Harrison (1894-1986) served on the Eastman organ and opera faculties from 1922 until 1925. Born in Guilford, England, he began his musical studies at the age of eight as a choirboy at Christ Church Cathedral, Oxford, where he also studied piano, theory, and counterpoint, and won a coveted scholarship for organ study at the Royal College of Music. His studies in London, which also included conducting and choir-training, earned him the position of organist and choirmaster of the Cathedral of St. Mary and St. John in Manila, Philippines. In 1920, Harrison came to Rochester to serve as organist at St. Paul’s Episcopal Church. When the Eastman School was founded, he was named instructor of organ and piano, a position which he held until 1923, when he became assistant conductor of the School’s opera department and conductor of the Eastman Theatre Orchestra. An important figure in the musical life of Rochester, Harrison also was conductor of the Rochester Civic Orchestra and associate conductor of the Rochester Philharmonic Orchestra until 1951.