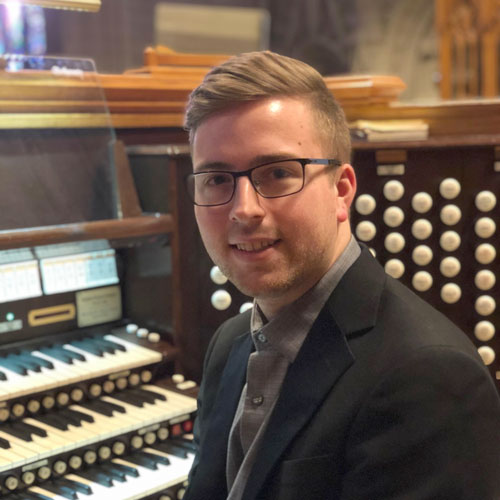 Andrew Van Varick is a Doctoral student in organ performance and literature at the Eastman School of Music, studying under David Higgs and accompanying the Eastman-Rochester Chorus under the direction of Dr. William Weinert. Previously, he received his Master of Music at Eastman, and he holds a Bachelor of Music degree, magna cum laude, from Montclair State University, where he studied organ with Vincent Carr and John Miller, piano with Mark Pakman, and harpsichord with Dr. Hsuan-Wen Chen. During his time at Montclair, Andrew served as the principal student accompanist of the Montclair State University Chorale, directed by Dr. Heather Buchanan, and was organist for their performances of Dan Forrest’s Jubilate Deo and John Rutter’s Gloria. He participated as a continuo harpsichordist in the MSU Collegium Musicum, accompanied an undergraduate opera workshop, and played keyboards in the pit orchestras of many musical theater productions.

Andrew has performed in coachings and masterclasses with Balint Karosi, Michel Bouvard, Wilma Jensen, Simon Johnson, Ezequiel Menendez, Chelsea Chen, and Alan Morrison. He was featured on the “Young Organ Artist” series at the Central Synagogue in Manhattan, New York City, and the “Wednesdays at Noon” recital series at the Cathedral Basilica of the Sacred Heart in Newark, New Jersey. Currently, Andrew serves as music director and organist at Central Park United Methodist Church in Buffalo, New York.

Back
Go to Top