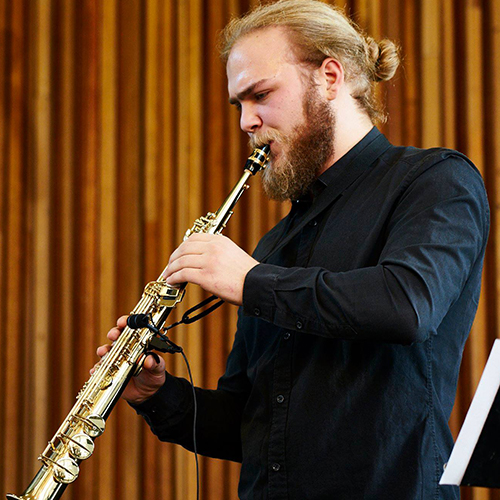 Floris Van der Veken is a Belgian saxophonist currently pursuing a Doctor of Musical Arts degree at the Eastman School of Music with Dr. Chien-Kwan Lin. He received his Master’s degree as well as a Postgraduate performance degree, both with highest distinction, at the Royal Conservatoire of Antwerp, Belgium, studying under Hans de Jong. During an exchange year he studied under Rodrigo Vila at the Conservatori Superior de Música de les Illes Balears in Mallorca, Spain.

Floris specializes in contemporary and experimental repertoire, often working together with composers to highlight new works. In a collaboration with the composer Wim Henderickx, he premiered the concerto Empty Mind I for soprano saxophone and live electronics. Being passionate about interdisciplinary performances, Floris wrote and directed his own music- and dance theatre ‘MOIRA – Ode to a Life of Failure’ under the coaching of Muziektheater Transparant, which premiered in 2019.

Floris is the 2020 Laureate of the ‘Oranjebeurs’ for music, awarded by the Consulate of the Netherlands, and was awarded a grant for his studies in the US by the organization Inspiratum. Having studied conducting as a minor during his Master’s, Floris was the assistant-conductor of l’Orquestra del Conservatori Superior de les Illes Balears in 2018. He participated in many masterclasses with renowned saxophonists such as Timothy McAllister, Arno Bornkamp, Ryo Noda, Lars Mlekusch, Vincent David, Joonatan Rautiola, Jérôme Laran, and Nicholas Prost.