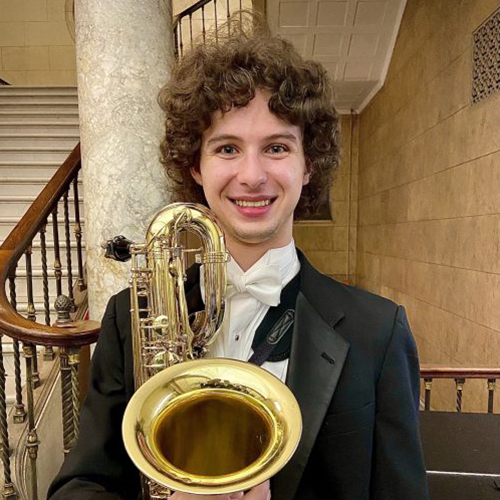 Matthias Roth is a freshman from Long Beach, New York, and is pursuing a Dual Degree in Saxophone Performance and Chemistry. He has been playing the saxophone for over eight years, and has received instruction in both the classical and jazz styles from Dr. Geoffrey Landman and Premik Russell Tubbs. Additionally, he has received instruction from various professors across the United States, such as Dr. Timothy McAllister and Dr. Otis Murphy. In high school, he participated in the Nassau-Suffolk Wind Symphony, where he sat first chair for two years. He was also a participant in the NYSSMA All-State Symphonic Band and Wind Ensemble, and the NAfME All-Eastern Concert Band. As of now, he is a member of the Eastman Saxophone Project under the instruction of Professor Chien-Kwan Lin, the Eastman Wind Orchestra under the direction of Dr. Mark Davis Scatterday, and an underclassmen saxophone quartet under the instruction of Leonardo Aguilar. Matthias is also an experienced pianist and drummer, both of which are roles he performed as in pit orchestra. As a drummer, Matthias is a member of a rock band in his hometown which has recently released two original singles. Furthermore, Matthias has premiered a personal composition for his high school’s Tri-M Music Honor Society Induction Ceremony.
Back to Current Studio
Go to Top