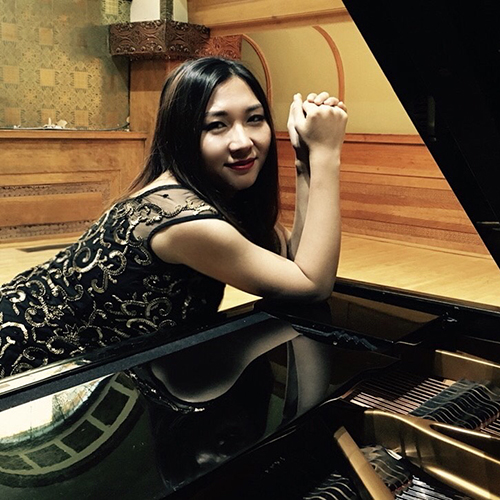 Pianist Mizi Li began her musical studies at the age of five in her native city, Hohhot, Inner Mongolia, China. Ms. Li holds degrees from the Central Conservatory of Music in Beijing, and the Chicago College of Performing Arts. Her principal teachers include Xian Zou, Winston Choi, and Edward Auer.

Ms. Li has participated in many music festivals, including the 6th Beijing International Piano Festival, the 16th Season International Keyboard Institute & Festival in New York, 2013; the 2015 Krlovac Piano Festival in Croatia, the Mateus Music Academy 2015 in Portugal, the 2016 Gilmore Keyboard Festival in Kalamazoo, Michigan. In 2015, she was the winner of 2015 CCPA Solo Competition, and the second-place winner of the Cliff Dwellers Arts Foundation 2015 Piano Competition. As a soloist, she performed at the 2010 Chopin Marathon Concert-Series held in the Forbidden City Concert Hall in Beijing, and in 2016, she performed Ravel’s Piano Concerto for the Left Hand at the Harris Theater, in Chicago.

As a much sought-after collaborative pianist and chamber musician, she has partnered with such musicians as Alex Hersh, Julian Hersh, Stefan Hersh, and MingHuan Xu. In addition, Ms. Li was key participant in Opera Fest 2019 at Roosevelt University. Ms. Li also performed with Chinese violinist Yang Song in the first ever livestreamed TikTok recital hosted by the Shanghai Radio station ERC Classic FM 2.

Ms. Li is currently pursuing the DMA degree in Piano Accompanying and Chamber Music at the Eastman School of Music, under the guidance of Dr. Andrew Harley.