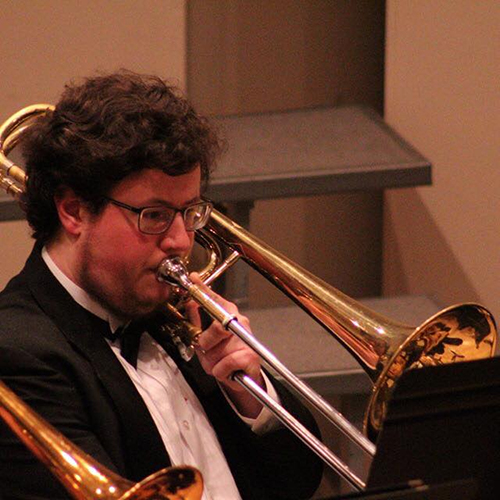 Andrew Blake is a second-year Ph.D. student in music theory. Prior to his enrollment at Eastman, he earned a B.M. in Music Performance (Trombone) and a B.S. in Computer Science from Wright State University (2018), and a M.A. in Music Theory from Kent State University (2020). His research interests include music cognition/perception, 20th century music, and microtonal systems of organizing pitch (an interest which often intersects with the other two). His recent presentations have included “Tempering the Clavier,” a corpus study which examines the fugues of Bach’s Well-Tempered Clavier for possible hints as to which well temperament the composer had intended, and “All the Small Things: Microtiming Deviations in Contemporary Punk” (co-authored with Matt Chiu), which examined differences in expressive rhythmic timing across subgenres of punk music.

His teaching experience includes:
In addition to his studies and work at Eastman, he is currently the catcher for Absolute Pitch, the official softball team of the ESM theory department, and plans to join a community band in the Rochester area once things have opened up again.
Back to Current Students
Go to Top