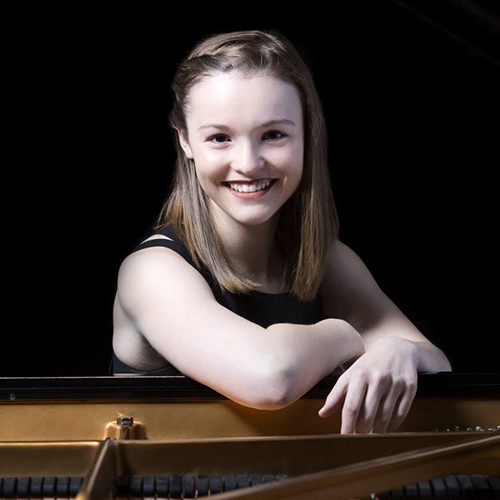 A recent graduate of the Master of Music in Accompanying and Chamber Music at the Eastman School of Music, Maeve Berry is a collaborator who finds immense joy in working with both singers and instrumentalists. Prior to studying at Eastman, Maeve received a Bachelor of Music in piano performance at The Pennsylvania State University as a cum laude graduate in the studio of Dr. Christopher Guzman. She received several awards throughout her college years, including the prestigious Presser Scholarship in 2018. In the spring of 2019, Maeve was awarded the Creative Achievement Award from the College of Arts and Architecture and was also inducted into Pi Kappa Lambda at Penn State.

At Eastman, Maeve is currently pursuing a Doctor of Musical Arts in Piano Accompanying and Chamber Music with Dr. Andrew Harley and holds a graduate assistantship in both studio accompanying and opera. Maeve was awarded the Brooks Smith Fellowship and the Jean Barr Endowed Scholarship to continue her subsequent degree studies at Eastman. She also received the Barbara M. H. Koeng award in 2020 for excellence in vocal collaboration and the Jean Barr Award in 2021. She also pursued an Advanced Certificate in Music Theory Pedagogy in addition to her master’s studies.

During her master’s degree, she was accepted into several summer programs such as Songfest LA and Toronto Summer Music Festival Art of Song program. This year, Maeve was a finalist in the Kneisel Lieder Competition. Maeve was also an Encouragement Award Winner along with her singer in the Gerda Lissner International Lieder Competition in New York City.

Throughout the 2020-2021 academic year, Maeve served as the Marketing and Outreach chair for Eastman’s Graduate Student Association. She is currently also an active member in Schola Cantorum at Christ Church in Rochester and spends her Sunday mornings as a choral scholar at Church of the Ascension.