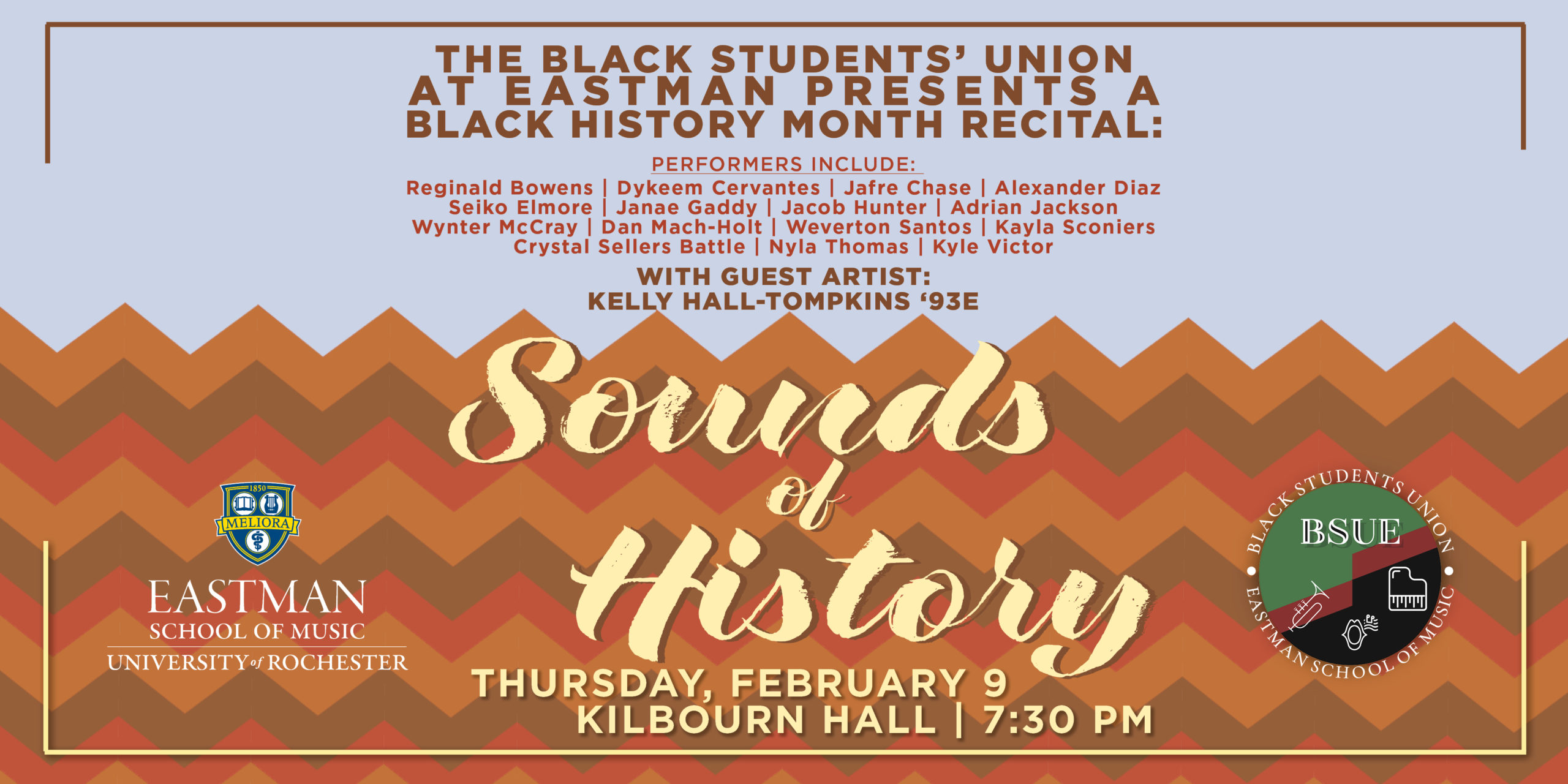 The Black Students Union at Eastman (BSUE) has put on a Black History Month Showcase recital since the BSUE reemerged in 2018. This year’s concert, “Sounds of History,” aims to promote music written by black composers and showcase the talent of black students at Eastman. The 2023 Showcase will take place on Thursday, February 9 at 7:30 p.m. in Kilbourn Hall, featuring a guest performance by celebrated violinist Kelly Hall-Tompkins ‘93E.

“I am so excited to be a part of bringing the Black History Month recital to Eastman this year,” says Dr. Crystal Sellers Battle, Associate Dean of Equity and Inclusion and Director of the George Walker Center for Equity and Inclusion in Music. “This is my first year participating in the event and I can’t wait to hear our talented students bring such wonderful music to life. It is also an honor to have Eastman alumna and Centennial Award recipient Kelly Hall-Tompkins performing on this recital — she is an incredible musician and her willingness to be a part of this event is astounding.”

Repertoire for the Black History Month Showcase features a wide array of selections, spanning from traditional hymns to Stevie Wonder. The evening’s performers include members of the Eastman BSUE along with Hall-Tompkins and Sellers Battle. Also featured on the program is a new song cycle, Star Gazing, performed by Sellers Battle and composed by her mentor, Dr. Raymond Wise, based on the life of Elizabeth (Lizzie) Breckenridge.

According to BSUE executive board member Dykeem Cervantes ‘24E, “The Black Students Union at Eastman has been working really hard to put on our Black History Month recital!” He continues, “This BSUE tradition lets us celebrate our achievements as performers while also speaking to our mission of showcasing the music of underrepresented composers.”

This performance is free and open to the public. You may also click here to watch the concert via livestream, starting approximately 15 minutes before the concert.

Winner of a Naumburg International Violin Competition Honorarium Prize and featured in the Smithsonian Museum for African American History, Kelly Hall-Tompkins ‘93E is an acclaimed violin soloist and entrepreneur. A widely acclaimed soloist and recitalist, she has appeared with the Symphonies of Baltimore, Dallas, Madison, Oakland, Greensboro and Artist in Residence with Cincinnati, with conductors such as Leonard Slatkin, Keith Lockhart and Dmitry Sitkovetsky. As guest concertmaster Ms. Hall-Tompkins has appeared with several orchestras, including Chineke!, Sphinx and as a member the Gateways Festival Orchestra. Inspired by her experience as the “Fiddler”/violin soloist in a recent Broadway revival of Fiddler on the Roof, she commissioned and developed The Fiddler: Expanding Tradition, her fourth solo album. During the pandemic, she premiered four pieces written for her, and participated in unique collaborations with Tony-nominated actor Daniel Watts, aerial dancer Alexandra Peter, Frisson Films, Gil Shaham’s Gilharmonic, Routledge Press as contributing author for a new book on Music and Human Rights and with WQXR as part of the inaugural Artist Propulsion Lab.

As founder of Music Kitchen: Food for the Soul, Kelly Hall-Tompkins is a pioneer of social justice in classical music. She has brought top artists in over 100 concerts in homeless shelters coast to coast from New York to Los Angeles, and in Paris. (Music Kitchen commissioned Forgotten Voices, a song cycle comprised of comments written by shelter clients set to music by 15 award-winning composers and premiered in Association with Carnegie Hall in March 2022.)