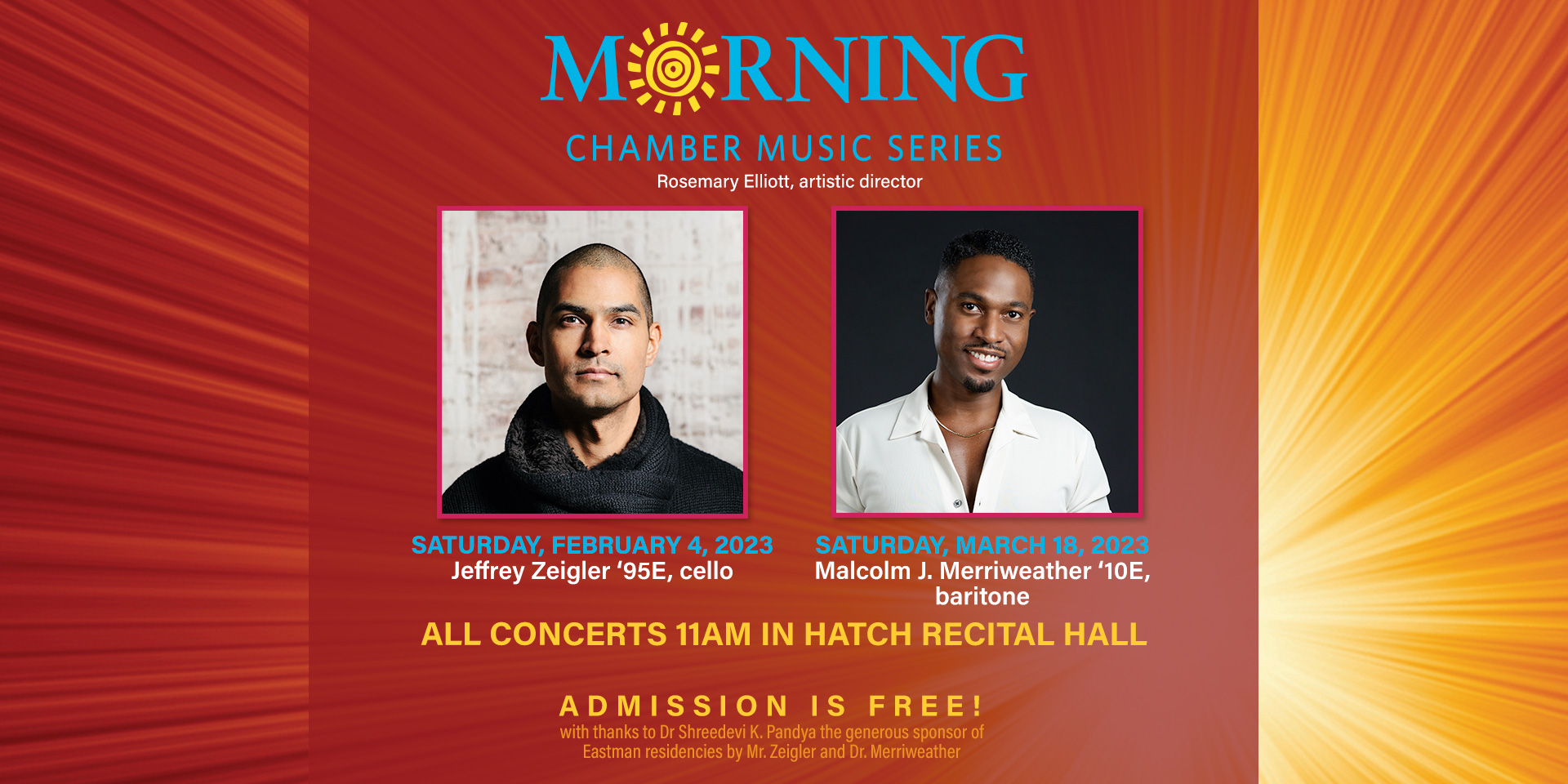 The Eastman School of Music is excited to announce its Morning Chamber Music Series for Spring 2023. Performances will take place in Hatch Recital Hall at 11:00 a.m. on Saturdays. These concerts will feature alumni guests Jeffrey Zeigler ‘95E on February 4, and Malcolm J. Merriweather ‘10E (MM) on March 18. Each artist will perform alongside current Eastman faculty and students in varied programs highlighting the rich diversity of the school.

Award winning cellist Jeffrey Zeigler ‘95E will perform a program featuring the title work from his latest solo album, Houses of Zodiac as well as give the world premiere of four new works written for him by current Eastman composition students. Zeigler will also be joined by Professor of Piano, Marina Lomazov to perform David Liptak’s Cello Sonata.

“I am so thrilled to return to Rochester to be a part of Rosemary Elliot’s Morning Chamber Music Series,” shares Zeigler. “Eastman is a close community and I wanted to share a program that reflected this. I’ll begin the concert by teaming up with my old friend Marina Lomazov to play David Liptak’s gorgeous Cello Sonata and then give the world premiere of four works by current Eastman composition students. As an undergrad at Eastman, I learned so much about what could be possible in music. My hope in playing these works is to help bring the imagination of these young voices to life, and to play a role in their artistic and professional development.”

“I am delighted to return to Eastman to present vocal masterpieces by mid-20th century American composers,” says Merriweather. “It will be a treat to perform with the faculty string quartet and present Samuel Barber’s Dover Beach. The highlight of the program will be the opportunity to perform vocal music by Margaret Bonds and Florence Price. Their music has been central to my research and scholarship over the past seven years!”

“Following the success of the Morning Chamber Music Series last year, I have decided to focus again on inviting distinguished alumni to join the nationally and internationally recognized chamber musicians on our current string faculty,” says Rosemary Elliott. “Many of our students go on to have successful careers combining chamber music, teaching, and performances in larger ensembles. Having alumni join us for this collaborative experience provides great inspiration for our current students.”

The guests will establish a mini residency at Eastman during the week of their performances. They will engage with students through their shared performances and will also give masterclasses and presentations to the student body as a whole.

This series is made possible by a generous gift from Dr. Shreedevi K. Pandya.

Both concerts are free and open to the public. For more information about the Morning Chamber Music series and all Eastman events, visit esm.rochester.edu/events.

Jeffrey Zeigler is one of the most innovative and versatile cellists of our time. Strings Magazine says Zeigler is “widely known for pushing boundaries and breaking conventions.” The New York Times has described Zeigler as “fiery,” and a player who performs “with unforced simplicity and beauty of tone.” Acclaimed for his independent streak, Zeigler has commissioned dozens of works, and is admired as a potent collaborator and unique improviser. As a member of the internationally renowned Kronos Quartet from 2005-2013, he is the recipient of the Avery Fisher Prize, the Polar Music Prize, the President’s Merit Award from the National Academy of Recorded Arts (Grammy’s), the Chamber Music America National Service Award and The Asia Society’s Cultural Achievement Award.

Mr. Zeigler has released 39 solo and chamber music recordings for Nonesuch Records, Deutsche Grammophon, Cantaloupe, Smithsonian Folkways and National Sawdust Tracks and has appeared with Norah Jones on her album Not Too Late on Blue Note Records. Zeigler can be heard on the film soundtrack for Paolo Sorrentino’s Academy Award winning film, La Grande Bellezza, as well as Clint Mansell’s Golden Globe-nominated soundtrack to the Darren Aronofsky film, The Fountain. Zeigler can also be seen making an on-screen cameo in Season 4 of the Amazon Prime’s Golden Globe Award winning series Mozart in the Jungle.

His most recent solo album, Houses of Zodiac, is his first full collaboration with his wife, trailblazing composer Paola Prestini. Strings Magazine described the album as “one of the greatest and most ambitious solo cello albums of all time.” It is a multimedia experience that combines spoken word, movement, music, and imagery into a unified exploration of love, loss, trauma and healing. Filmed by Murat Eyüboglu at MASS MoCA and Studio Polygons in Tokyo, Japan, with premieres at The Broad Museum in Los Angeles and the RomaEuropa Festival in Italy. The live and filmic experience features the performances and original choreography of New York City Ballet soloist Georgina Pazcoguin and star Butoh dancer Dai Matsuoka from Sankai Juku with the poetry of Anaïs Nin, Pablo Neruda, Brenda Shaughnessy, and Natasha Trethewey.

Other upcoming highlights include being featured in a new cello opera entitled The Old Man and the Sea directed by Karmina Silec with music by Paola Prestini and libretto by Royce Vavrek.

Zeigler was the Music Director for two eco-documentaries that exist at the intersection of art, science, and community. Directed by Murat Eyüboglu, part one was entitled The Colorado and premiered at the Metropolitan Museum, the Kennedy Center, and Stanford Live and at over 30 film festivals. An excerpt of Part two, The Amazon, was presented at the Margaret Mead Festival at the American Museum of Natural History.

Jeffrey Zeigler is a member of the Board of Directors of Chamber Music America and CelloBello and is on the Honorary Committee of the Sphinx Organization. Zeigler was recently appointed Assistant Professor of Chamber Music and Innovation at the Frost School of Music at the University of Miami.

Grammy-nominated conductor and baritone, Malcolm J. Merriweather, is Director of the New York Philharmonic Chorus and Music Director of New York City’s The Dessoff Choirs. He is an Associate Professor at Brooklyn College, and on the faculty at the Manhattan School of Music.

He has conducted ensembles in venues that include Carnegie Hall, Lincoln Center, The Metropolitan Museum of Art, Madison Square Garden, Westminster Abbey, and at the Vatican before Pope Francis. His repertoire covers everything from Bach to the world premiere recording of The Ballad of the Brown King by Margaret Bonds (AVIE Records).

The baritone studied with Rita Shane and has been featured as a soloist throughout the United States and has premiered dozens of contemporary solo works. He was a fellowship recipient at Tanglewood.

Dr. Merriweather has earned degrees from Eastman, Manhattan School of Music, and Syracuse University. Connect with him on Twitter and Instagram @maestroweather and at malcolmjmerriweather.com.

The Eastman School of Music was founded in 1921 by industrialist and philanthropist George Eastman (1854–1932), founder of Eastman Kodak Company. It was the first professional school of the University of Rochester. Mr. Eastman’s dream was that his school would provide a broad education in the liberal arts as well as superb musical training.