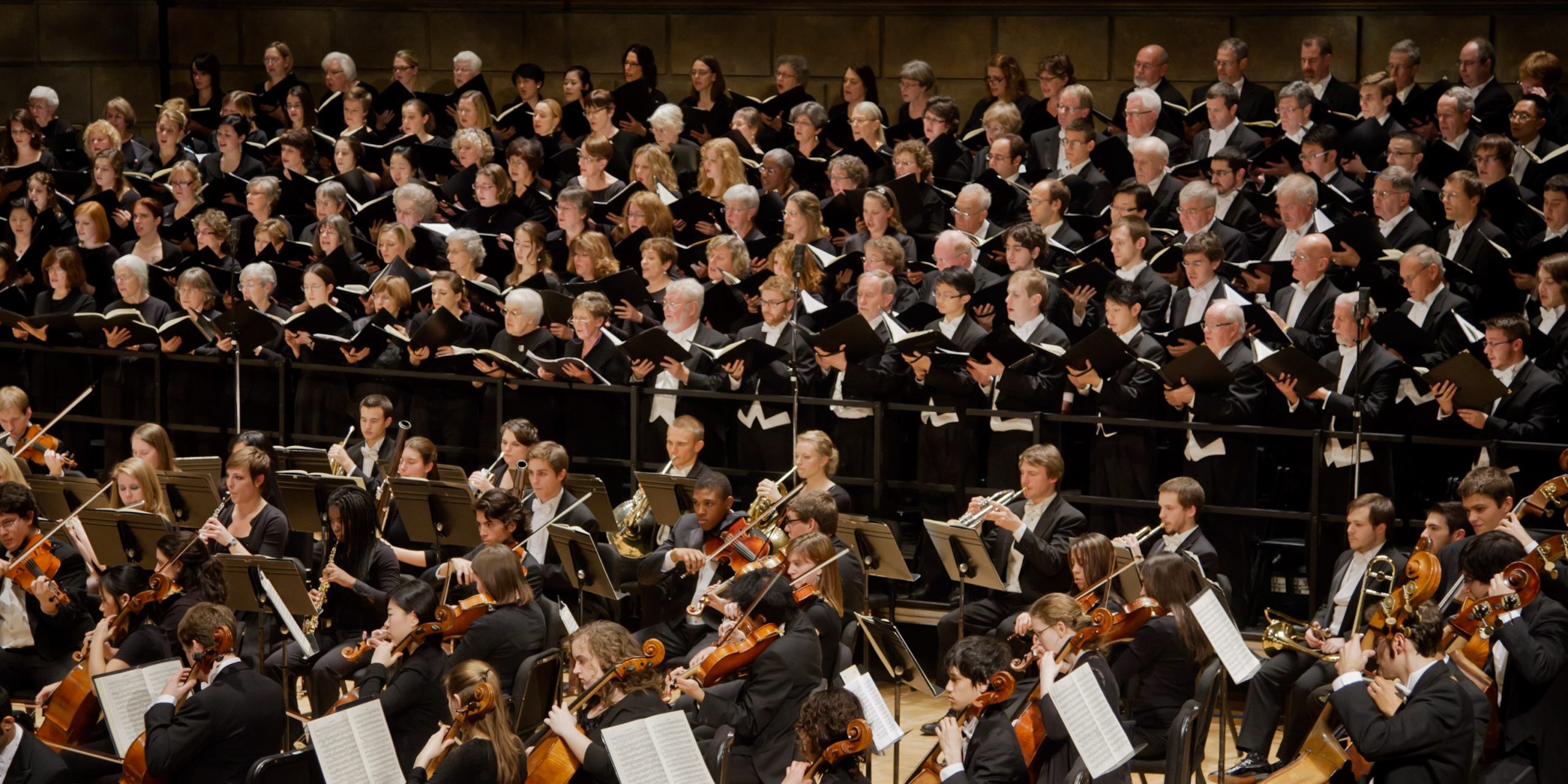 On Friday, December 2 at 7:30 p.m. in Kodak Hall, the Eastman-Rochester Chorus (ERC) and the Eastman School Symphony Orchestra (ESSO) will perform Johannes Brahms’ German Requiem, op. 45 (Ein Deutsches Requiem). The concert will be conducted by William Weinert and features student soloists Mary Fetterman ‘24E (MM), soprano, and Isaac Pendley ‘23E (MM), baritone. Fetterman, a master’s student at Eastman, looks forward to the performance; “To perform the solo in the Brahms Requiem with ERC and ESSO is an honor and a privilege. The talent pouring out of these ensembles is exhilarating, and I feel so blessed to be immersed in it!”

The ERC, now in its fortieth season, is a select symphonic chorus consisting of singers from the greater Rochester community and students from the Eastman School of Music. William Weinert has directed the chorus for over 25 years and has molded it into an impressively versatile ensemble with a keen sense of musical integrity.

Weinert, who is the Director of Choral Activities at Eastman, shared a bit of history about the program. “Brahms’ Requiem was his first public success and has received countless performances since its premiere in 1868,” with Weinert himself conducting the beloved score numerous times. “Brahms did not use a liturgical text but chose passages from the Bible and wove them into a sermon of consolation for the living. It is a work that always resonates deeply with both performers and audiences.” Listeners will find that Brahms took a humanist approach to his interpretation of the Luther Bible, as opposed to an explicitly Christian one, uniquely allowing this work to console the bereaved of all faiths. Additionally, this is Brahms’ only large work to feature the harp, more specifically, “several” harps, which Weinert says, “not only leads to a more audible presence of the instrument, but a more visual one, as well — bringing an angelic aura to the piece.”

This event is free and open to the public.

About the Eastman-Rochester Chorus

Now in its fortieth season, the Eastman-Rochester Chorus is a select symphonic chorus consisting of singers from the greater Rochester community and students from the Eastman School of Music. The chorus presents works for chorus and orchestra in collaboration with the orchestras of the Eastman School of Music and the Rochester Philharmonic Orchestra. The chorus has presented a wide spectrum of repertoire, ranging from masterworks of Bach, Beethoven, and Handel to Rochester premiers of works by Christopher Rouse, Dominick Argento, and Leonard Bernstein. Recent performances have included the Britten War Requiem, Beethoven’s Missa Solemnis, and the Vaughan Williams Sea Symphony. The chorus has appeared with numerous distinguished conductors, including David Zinman, Robert Shaw, Gerard Schwarz, Jerzy Semkow, and Christopher Seaman, and is a founding member of the Greater Rochester Choral Consortium.

Since 1994, William Weinert has served as Professor of Conducting and Director of Choral Activities at the Eastman School of Music, where he conducts the Eastman-Rochester Chorus and the Eastman Chorale and supervises students in the graduate programs in choral conducting. He also serves as music director of Voices, Rochester’s only professional chamber chorus. The Eastman-Rochester Chorus is open to all singers in the Western New York Community by audition. In keeping with the motto on the façade of the Eastman Theatre – “For the Enrichment of Community Life”— there is no membership fee.