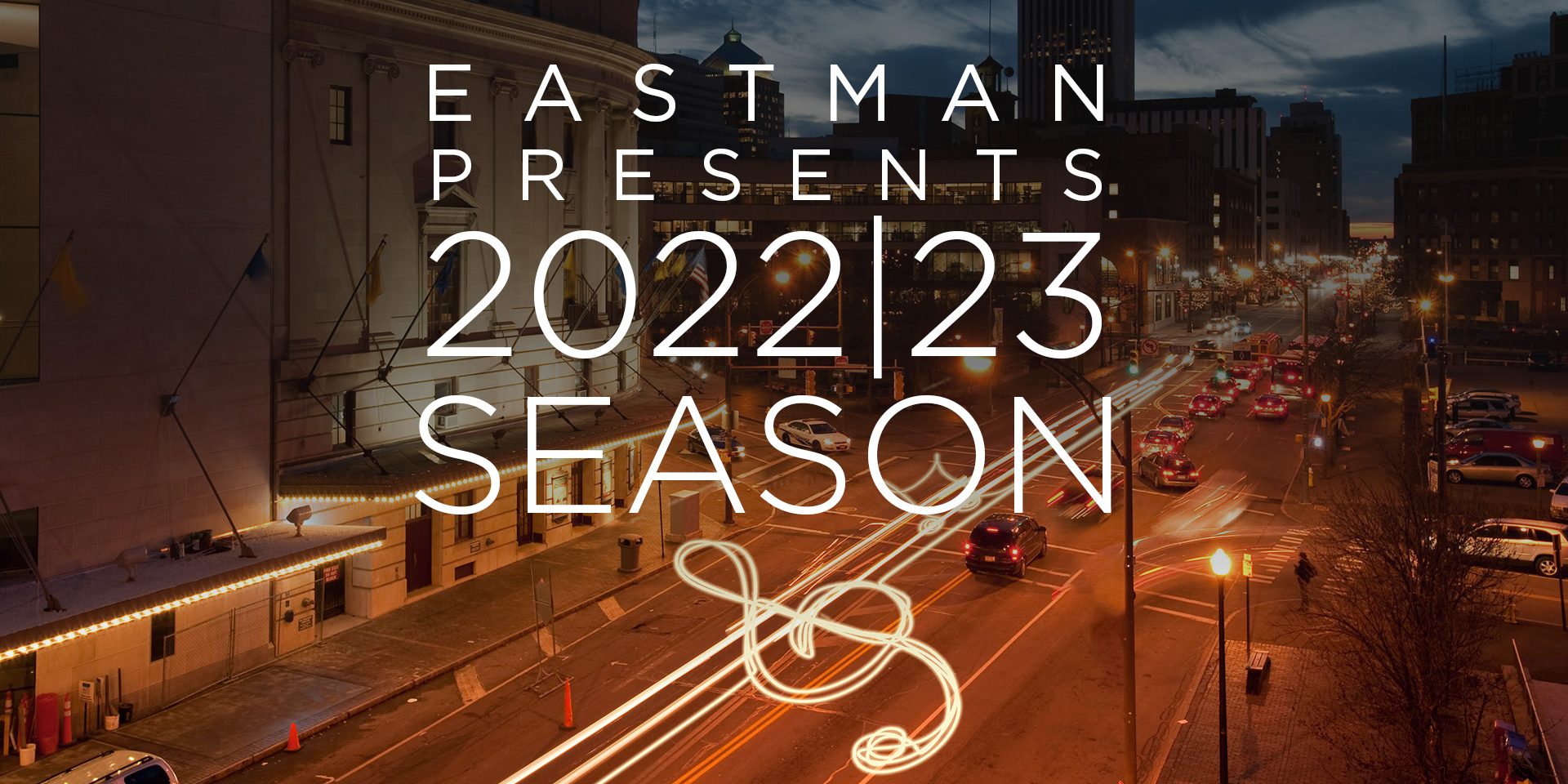 The Eastman School of Music is pleased to announce the details of the 2022-2023 Eastman Presents season. Concerts in each of the five series feature some of the world’s greatest artists performing in the three jewels at the Eastman School of Music: the acoustic and historic splendor of Kodak Hall at Eastman Theatre; Kilbourn Hall, one of the finest chamber music halls in the world; and Hatch Recital Hall, a gorgeous, modern performance hall. In addition to the five series, concerts will be presented as part of Eastman’s Centennial Celebration and The Rochester Fringe Festival, as well as several Faculty Artist Series concerts featuring members of Eastman’s esteemed faculty.

Tickets to all concerts are now available at www.EastmanTheatre.org or by calling 585-274-3000. Patrons are encouraged to purchase as soon as available to secure the best seats for the most sought-after concerts and receive the highest level of savings.

“Over the past 100 years, we have educated, engaged, uplifted, and entertained audiences with talented artists from around our world.  We hope you will join us, continuing a tradition of live music in our historic concert venues, for our 2022/23 Eastman Presents Series,” shares Mike Stefiuk, Director of Concert Operations.

From the Medieval city of Lviv on Ukraine’s western border with Poland, an orchestra dares to do the unthinkable: carry a message of hope across the world during a period of war and instability. The ensemble’s resilience stands as a testament to its determination and the timelessness of the great works it performs with vigor, distinction, and artistry. Led by the dynamic Ukrainian American conductor Theodore Kuchar, featuring violinist Vladyslava Luchenko, with a program that includes Brahms’ Tragic Overture, Bruch’s Violin Concerto No. 1 and Dvorak’s Symphony No. 6, the orchestra’s visit to Rochester is sure to be a night to remember.

Voices consists of twenty-four of Western New York’s finest ensemble singers and is celebrating its sixteenth season in 2022. They have presented over fifty concerts of music ranging over the past thousand years, including two complete cycles of Bach’s motets, as well as his St. John and St. Matthew Passions and B-minor Mass. They have presented numerous premieres and first U.S. performances of works from the Renaissance and the French Baroque, and a broad range of vocal chamber music.

Join internationally acclaimed, mezzo-soprano Anne Sofie von Otter and one of today’s most notable and exciting keyboard artists, Kristian Bezuidenhout ‘01E, for an enchanting evening of Lieder and piano pieces. “Von Otter has honed the art of singing to such a point that she is purely expressive, no matter what she’s singing,” raves the Washington Post.

One of the world’s premier wind quintets, Imani Winds is renowned for its culture-crossing repertoire, its creation of new music, and the vigor, daring, and integrity of its playing. Since 1997, the group has vastly expanded the repertoire for wind quintet, commissioning music from prominent classical and jazz composers, collaborating with great artists like Yo-Yo Ma and Wayne Shorter, and thrilling audiences with music that ranges from Mendelssohn to Miles Davis to something brand new.

This seven-member brass ensemble of principal players from Britain’s top orchestras has been called “dazzlingly polished” by BBC Music magazine. Making its Eastman debut, Septura performs its own arrangements of some of the world’s most beloved classical works.

Aside from being one of the principal innovators of modern jazz guitar, John Scofield is a creative artist of an even rarer sort: a stylistic chameleon who has forged a consistent, rock-solid aesthetic identity. A triple Grammy Award–winning artist with more than 40 recordings to his credit, Scofield has expressed himself in the vernaculars of bebop, blues, jazz-funk, organ jazz, acoustic chamber jazz, electronically tinged groove music, jam band style, and orchestral ensembles with ease and enthusiasm.

The Ying Quartet occupies a position of unique prominence in the classical music world, combining communicative performances with a fearlessly imaginative view of chamber music in today’s world. As quartet-in-residence at the Eastman School of Music, the ensemble performs three Eastman-Ranlet Series concerts during the season.

Praised for its warmth, lyricism, and “infallible instincts” (Philadelphia Inquirer), the Brentano Quartet enjoys successful award-winning performances around the world. Making its Kilbourn Hall debut, the Brentano Quartet pays tribute to Dvořák and his American legacy.  Also included are some of the spirituals Dvořák found so moving, works by William Grant Still and George Walker, short works by Charles Ives, and a newer piece by Steven Mackey.

A silver medalist at the 2015 International Tchaikovskv Competition, George Li has established a major international reputation with performances on the world’s most prestigious stages. In his return to Eastman, Li showcases works of Schumann, Ravel, and keyboard pyrotechnics in Stravinskv’s Petrushka.

“A performer of near-superhuman technical prowess” (New York Times), pianist Marc-André Hamelin is known worldwide for his unrivaled blend of consummate musicianship and brilliant technique in the great works of the established repertoire, as well as for his intrepid exploration of the rarities of the 19th, 20th, and 21st centuries. He regularly performs around the globe with the leading orchestras and conductors of our time and gives recitals at major concert venues and festivals worldwide.

Benjamin Grosvenor has encouraged comparisons with the all-time piano greats. Technically assured and possessing a natural musicality, Grosvenor is known for his vivid colors and elegant phrases. The pianist breathes personality into every characterful performance, yet every detail is finely wrought and sensitively shaded. This bold and wide-ranging program includes works by Bach/Busoni, Schumann, Ravel, and Prokofiev.

The winner of the 2021 Chopin Piano Competition in Warsaw, among several other accolades, Canadian pianist Bruce Liu is a major new keyboard talent. He demonstrates a penetrating insight and maturity well beyond his years and brings a joyous freshness and spontaneity to his revelatory performances. For his Eastman debut, Liu presents a program of thrilling Chopin masterpieces.

Qwanqwa is a supergroup of musicians from some of the ensembles of Addis Ababa (the capital city of Ethiopia).  Brought together by a shared passion for the power of Ethiopian music, Qwanqwa shines an experimentalism based in the virtuosity of rooted traditions. With swirling mesenko (one-stringed fiddle), punk krar solos (electric lyre), wah-wah-violin, bass krar boom, the unstoppable rhythm of heavy kebero (goat-skin drum) beats, and powerful traditional lead African diva vocals, Qwanqwa keeps the people wrapped in celebratory attention.

Tickets to all the Eastman Presents Series concerts are on sale now and can be purchased at the Eastman Theatre Box Office, 433 East Main St. or online at: http://www.eastmantheatre.org

A full digital and interactive brochure can be found online.