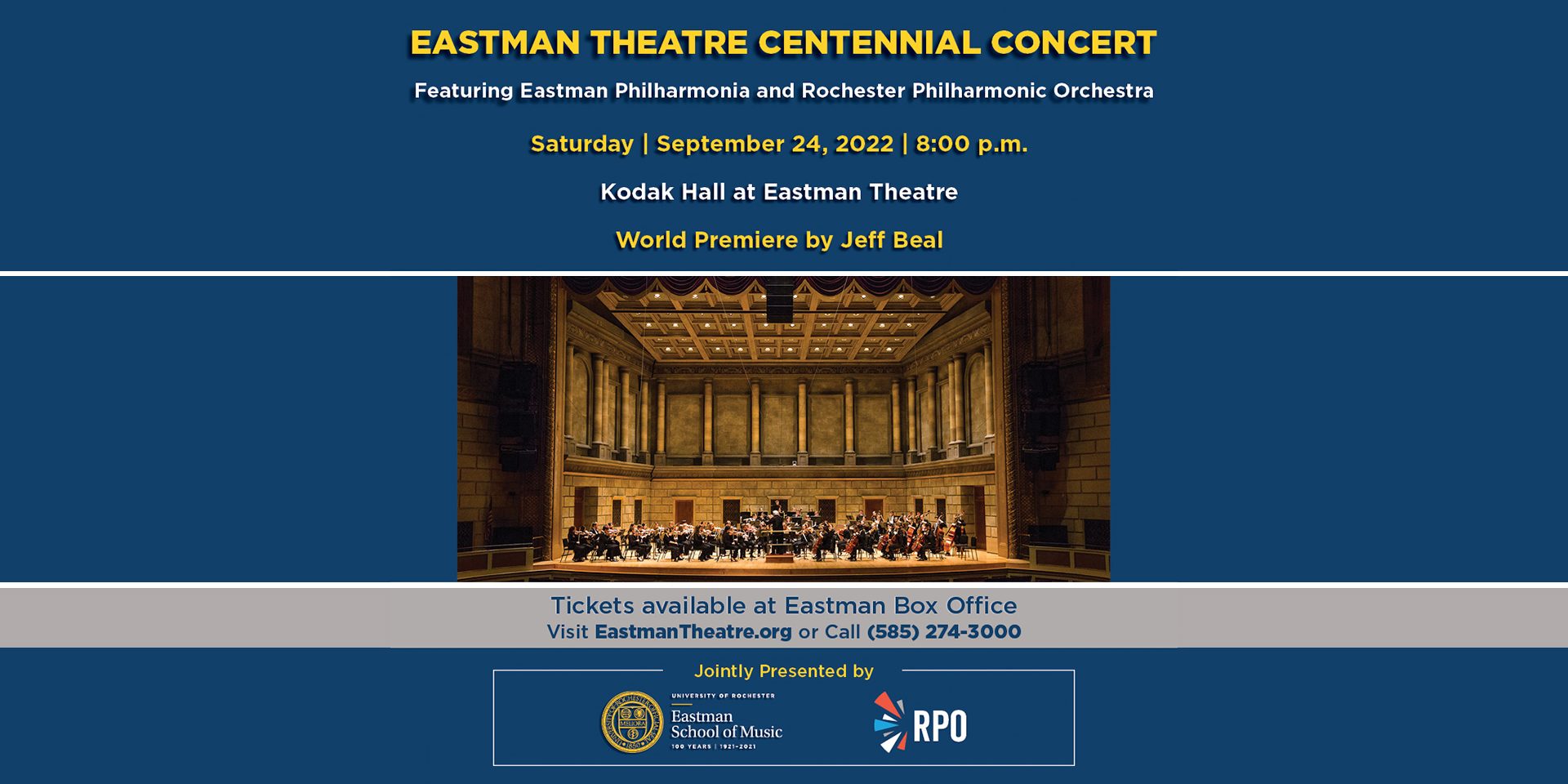 The Eastman School of Music of the University of Rochester, and the Rochester Philharmonic Orchestra (RPO), jointly present Eastman Theatre Centennial Concert, to be held at Kodak Hall at Eastman Theatre on Saturday, September 24, at 8:00 p.m.

This joint concert commemorates the stunning Eastman Theatre celebrating its centennial year. This coincides with Eastman School of Music’s official centennial, which is immediately followed in 2023 with RPO’s own 100-year-celebration. The concert program will feature the Eastman Philharmonia performing Don Juan, conducted by Neil Varon, and the RPO performing Howard Hanson’s Symphony No. 2, Romantic, conducted by Andreas Delfs.

In addition, Philharmonia and RPO jointly performing Eastman alumnus Jeff Beal’s (‘85E) world premiere of The Cathedral, conducted by Beal himself. “The Eastman Theater is a magnificent and historic concert and gathering space. Having spent my formative years performing there as a student, I’m honored to compose and conduct a new work to ring in its centennial,” shares Beal. He further describes his new piece, “The Cathedral will celebrate in sound the two orchestras who call the theater their home: the Rochester Philharmonic and the Eastman Philharmonia. As in a dialog between mentor and student, the two orchestras will be placed around the listener, and I hope will give us all attending the thrilling experience of these two wonderful ensembles in a beloved space.”

“It is an honor to have our Eastman Philharmonia perform with the Rochester Philharmonic Orchestra, especially on a world-premiere work by Jeff Beal,” shares Neil Varon, Professor of Conducting and Ensembles and conductor of the Eastman Philharmonia. “It is always important to give our students opportunities to perform new and exciting works, including Don Juan, and to experience performing alongside professional musicians such as the RPO is a special experience.”

“We, at the RPO, are thrilled to partner with Eastman School of Music for this performance,” says Curt Long, President and CEO of the RPO. “We’re especially excited that composer Jeff Beal has written a new work that will focus the audience’s attention on the theatre itself.  We hope you’ll join us in celebration of this historic and beautiful space that’s been a part of Rochesterians lives for almost 100 years.”

Tickets can be purchased at the Eastman Theatre Box Office, 433 East Main St. or online at: http://www.eastmantheatre.org.

Jeff Beal is a composer with a genre-defying musical fluidity. His film scores have received critical acclaim, while he remains a respected composer in the concert, theater, and dance worlds.

Beal’s evocative score and theme for the Netflix drama House of Cards received four Emmy Award nominations, and recently won for outstanding score, bringing Beal’s Emmy tally to nineteen nominations and five statues.  Other lauded series include HBO’s Carnivale and Rome.  Film scores feature the documentaries Blackfish and Athlete A and dramas Pollock, Appaloosa, and the upcoming Raymond and Ray for Apple TV+.

Beal’s orchestral works have been performed by the New World, Rochester, Pacific, Munich, New West, Minnesota, Detroit, and The National symphony orchestras. Commissions include works for the Metropole Orchestra, The Ying Quartet, Brooklyn Youth Chorus, Henry Mancini Institute, Prism Brass Quintet, Smuin Ballet, Grammy winner Jason Vieaux and St. Louis Symphony Orchestra who commissioned “The Paper-Lined Shack” for Leonard Slatkin and Grammy winning soprano Hila Plitmann. His choral works include The Salvage Men commissioned by the Eric Whitacre Singers and Sunrise, an evening length score for W.F. Murnau’s groundbreaking silent film commissioned by the Los Angeles Master Chorale.  Music for theater includes the 2015 World Science Festival Production Light Falls and the 2019 installation celebrating the 50th anniversary of the Apollo moon landing produced by 59 productions and presented on the Mall in Washington DC where it was viewed over three nights by more than a half a million spectators.

Born and raised in the San Francisco Bay Area, Beal’s grandmother was a pianist who performed on the radio and as accompanist for silent movies.   Beal graduated from the Eastman School of Music where he and his wife, Joan, recently donated $2 million to the creation of The Beal Institute for Film Music and Contemporary Media.

The Eastman School of Music, of the University of Rochester was founded in 1921 by industrialist and philanthropist George Eastman (1854-1932), founder of Eastman Kodak Company. It was the first professional school of the University of Rochester. Mr. Eastman’s dream was that his school would provide a broad education in the liberal arts as well as superb musical training.

Currently celebrating its centennial year, Eastman School of Music highlights include acclaimed guest artists performing alongside Eastman’s ensembles; national academic and music conferences; alumni events throughout the country; a documentary being produced in partnership with WXXI, and more. Pillar events include: “Opening of the Doors,” a community-driven celebration scheduled for March 2-6, 2022; “100 concerts to celebrate 100 years”; and a Meliora Weekend celebration in Fall 2022. For up-to-date information on the Eastman Centennial, please visit our Centennial website at https://www.esm.rochester.edu/100.

The Rochester Philharmonic Orchestra (RPO) has been committed to enriching and inspiring our community through the art of music since its origins in 1922. The RPO presents approximately 150 concerts and broadcasts a year, serving up to 170,000 people through ticketed events, education and community engagement activities, and concerts in schools and community centers throughout the region. Music Director Andreas Delfs joins the ranks of former notable RPO music directors, including Erich Leinsdorf, David Zinman, Mark Elder, and Conductor Laureate Christopher Seaman. Principal Pops Conductor Jeff Tyzik, now in his 28th season, has earned a national reputation for excellence in pops programming during his tenure with the RPO. The RPO reaches more than 15,000 youth through its specific education programs.