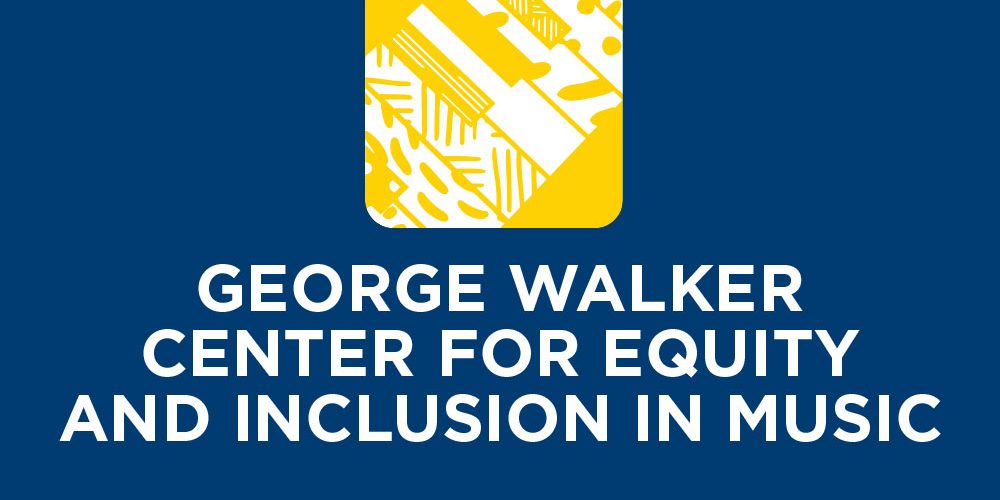 Eastman School of Music, of the University of Rochester, is proud to announce the creation of a new Center of Equity and Inclusion, now formally named and dedicated to the late George Walker ’56 (DMA, ’12 (Honorary).   The George Walker Center for Equity and Inclusion in Music will open and have a formal dedication on Saturday, April 16 at 10:00AM in Sproull Atrium, Miller Center.  The dedication will include remarks by University of Rochester President Sarah Mangelsdorf;  Jamal J. Rossi, Joan and Martin Messinger Dean at Eastman; Ian and Gregory Walker, sons of George Walker, and others.

The ceremony will be followed by a walkthrough of the new Center, as well as a Morning Chamber Music concert, dedicated to the music of George Walker, at 11:00 AM in Hatch Recital Hall. This concert—which is the final performance in the 2021-2022 series generously supported by Dr. Shredevi Pandya— will feature Eastman faculty members Irina Lupines, Guy Johnston, Masumi Rostad and Robin Scott, along with current Eastman students, will join violinist Gregory Walker to perform a varied program of chamber works by George Walker: Wind Set for Wind Quintet, Violin Sonata No 1, Five Fancies for Clarinet and Piano Four Hands, and String Quartet No 1.

Ian and Gregory Walker comment, “The Eastman School of Music played a major role in our father’s artistic development, from the lasting support he received from Howard Hanson to the deep friendships he formed over the years with faculty. We hope that the George Walker Center for Equity and Inclusion in Music will serve as a resource for the artistic development and empowerment of other promising artists, as modeled by our father’s commitment to excellence and freedom of expression.”

“George Walker was one of Eastman’s most distinguished alumni, both because of the quality and integrity of his music, but also as a pioneer and role model through his perseverance and achievements.” shares Jamal J. Rossi, Joan and Martin Messing Dean at the Eastman School of Music. “We are grateful to the Walker Family for allowing us to recognize Dr. Walker by naming our new Center for Equity and Inclusion in his honor.  Like music itself, this new center will serve as a vehicle to bring our community together and to lift up our spirits.”

George T. Walker was one of the most prolific and accomplished American composers of the last century.  The first African American to graduate with a Doctorate from Eastman in 1956 and the first African American composer to win a Pulitzer Prize for his work Lilacs in 1996, George Walker’s accolades also included an Eastman Alumni Achievement Award in 1975 and the Rochester Distinguished Scholar Medal in 1996 from the University of Rochester.

Walker’s career and legacy brimmed with accomplishments and successes. He blazed the trail for many African American musicians by being the first black instrumentalist to appear with the Philadelphia Orchestra; the first black instrumentalist to be signed by a major management company, the National Concert Artists; the first black tenured faculty member at Smith College; the first recipient of the Minority Chair established by the University of Delaware; and the first composer to receive the John Hay Whitney Fellowship Award. George Walker composed more than 90 works for orchestra, chamber orchestra, piano, strings, voice, organ, clarinet, guitar, brass, woodwinds, and chorus.

Walker’s works have been performed by virtually every major orchestra in the United States and by many in England and other countries. His orchestral composition, Foils, was commissioned by the Howard Hanson Institute for American Music and premiered by the Eastman Philharmonia in 2006.  Additional accolades include: the Harvey Gaul Prize, the Edward MacDowell Medal, the Yaddo medal, an American Academy of Arts and Letters Award, a Mary Flagler Cary Charitable Trust Award, and the Mason Gross Memorial Award; several fellowships and commissions, including Bennington Composer Conference Fellowships, two Guggenheim Fellowships, two Rockefeller Fellowships, a Fromm Foundation commission, two Koussevitzky commissions; and numerous grants from the Research Councils of Smith College, The University of Colorado, Rutgers University, the National Endowment for the Arts, and the New Jersey Council on the Arts,  and honorary doctorate degrees from Lafayette College (1982), Oberlin College (1983), Montclair State University, Bloomfield College, Curtis Institute of Music (1997), and Spelman College (2001).

Walker was elected to the American Academy of Arts and Letters in 1999 and was inducted into the American Classical Music Hall of Fame in 2000. He received the Dorothy Maynor Outstanding Arts Citizen Award in 2000 from the Harlem School of Arts. In March 2001, the Detroit Symphony awarded him its first annual Classical Roots Award for a lifetime of achievement in American Music. George Walker was awarded the prestigious A. I. duPont Composer’s Award in 2002, presented by the Delaware Symphony. In 2003, he was selected for inclusion in the Washington Music Hall of Fame (Washington, DC).

The three-semester-long Eastman Centennial celebration began in Fall 2021 and continues throughout 2022. Highlights include acclaimed guest artists performing alongside Eastman’s ensembles; national academic and music conferences; alumni events throughout the country; a documentary being produced in partnership with WXXI, and over 50 commissioned premieres. Full listings of these and other events, along with feature stories, ways to engage and more, can be found on our Centennial website at https://www.esm.rochester.edu/100.