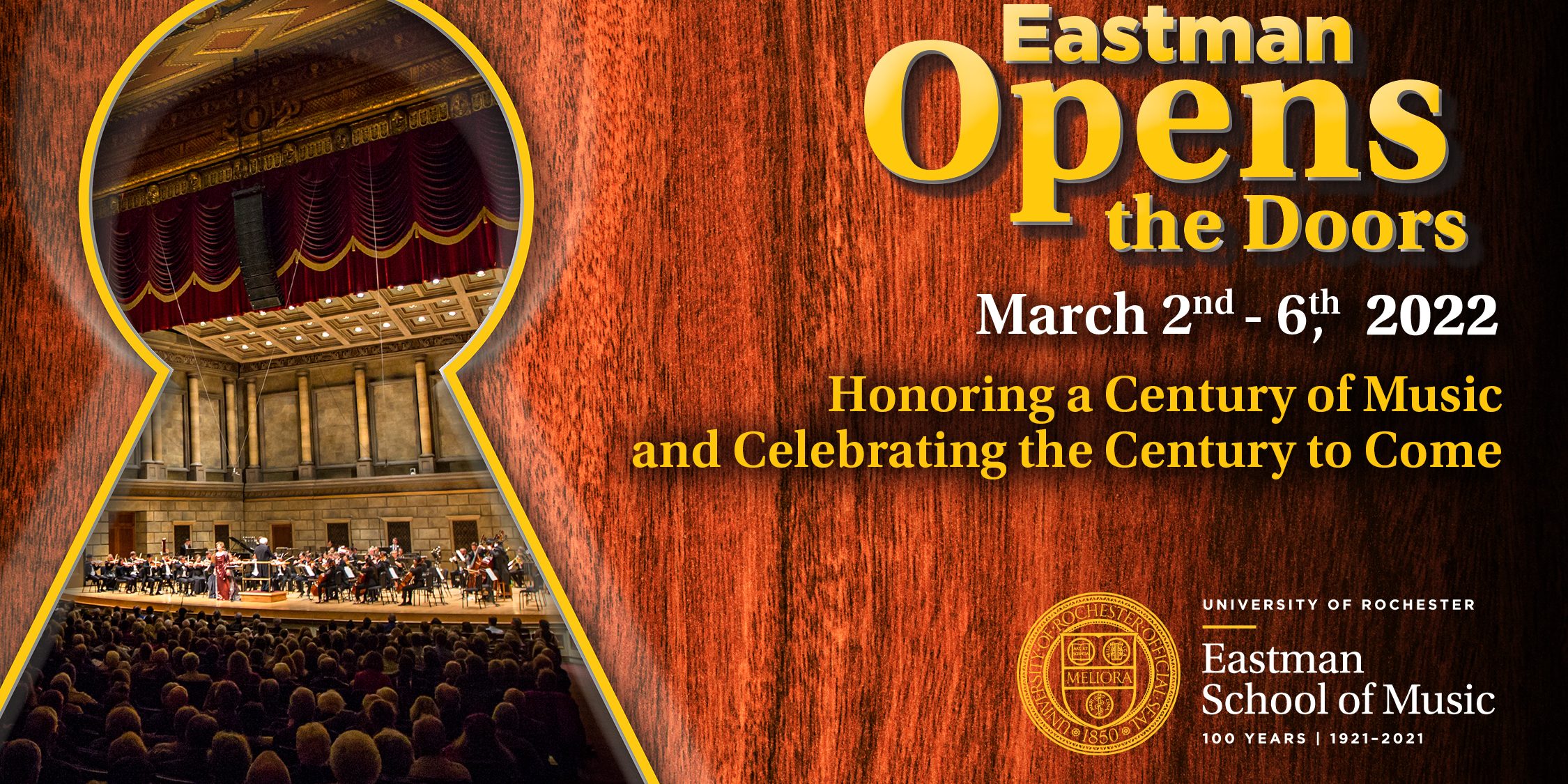 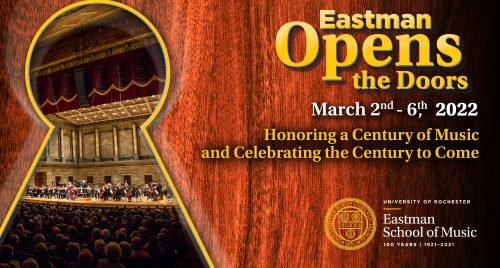 On March 4, 1922, the Eastman School of Music officially opened its doors to the community. On that date, all the main building’s floors had been completed, including the Main Hall (now Lowry Hall), the Cominsky Promenade, and the stunning Kilbourn Hall. A chamber music concert was given that evening to dedicate the concert space that has now heard thousands of performances ever since.

Fast forward 100 years … From March 2 through 6, 2022, Eastman will offer a wide variety of performances as we celebrate our centennial.

“In March 1921, upon the opening of the newly completed Eastman School of Music, the school opened its doors to the community,” remarks Jamal J. Rossi, Joan and Martin Messinger Dean of Eastman. “One-hundred years later, we are thrilled to invite the Rochester community to join us as we celebrate a century of commitment to the ‘enrichment of community life,’ as etched on the façade of the Eastman Theatre.”

“Eastman Opens the Doors is a way to say, ‘Thank you!’ to the Rochester community for 100 years of support of and participation in the art form that George Eastman held so dear,” shares Centennial Co-Chairs Sylvie Beaudette ‘93E (DMA) and Mark Scatterday ‘89E (DMA).

This 5-day long “festival” will include:

Eastman students and ensembles perform throughout the day in public concerts and venues around the Rochester area, including:

Students, faculty, staff, studios, and ensembles will perform all around the Eastman of School Music campus, with the public invited to walk around and hear music in various settings. Performances will include out-of-the-box repertoire and venues, as well as unusual collaborations between musicians, culminating in a special alumni evening event and a concert by the Eastman Studio Orchestra. Other events will include:

Lenti ‘60E, ‘63E (MAS) recently published the third volume of his history of Eastman, Nurturing the Love of Music: Robert Freeman and the Eastman School of Music. This volume focuses on the years 1973 to 1996, when Robert Freeman directed Eastman and changed the school profoundly.

The program consists of arrangements by Eastman masters and doctoral students, and also includes the premiere of a new composition by DMA/JCM trombonist Andrew Watkins. In addition, selections by the Eastman Studio Orchestra from the late 1970s, with Rayburn Wright conducting, will be screened.

J.S. Bach’s 280-year-old musical tour de force is the basis of a modern-day “moveable feast” at Artisan Works, the grand art space on Blossom Road. Musicians from Eastman and the Freiburg Musikhochschule (Music Conservatory), in small ensembles of varied instruments, will perform excerpts from Bach’s Art of Fugue throughout the Artisan Works galleries.

The weekend’s festivities will conclude with an “Indoor Festival.” Musicians from the Eastman Community Music School (ECMS) will be joined by several local orchestras, wind ensembles, and choirs to perform on Eastman’s stages: Kodak Hall and Kilbourn Hall.

Full listings of these and other events, along with feature stories, ways to engage and more, can be found on our Centennial website at https://www.esm.rochester.edu/100.

The three-semester-long Eastman Centennial celebration began in Fall 2021 and continues throughout 2022. Highlights include acclaimed guest artists performing alongside Eastman’s ensembles; national academic and music conferences; alumni events throughout the country; a documentary being produced in partnership with WXXI, and over 50 commissioned premieres.