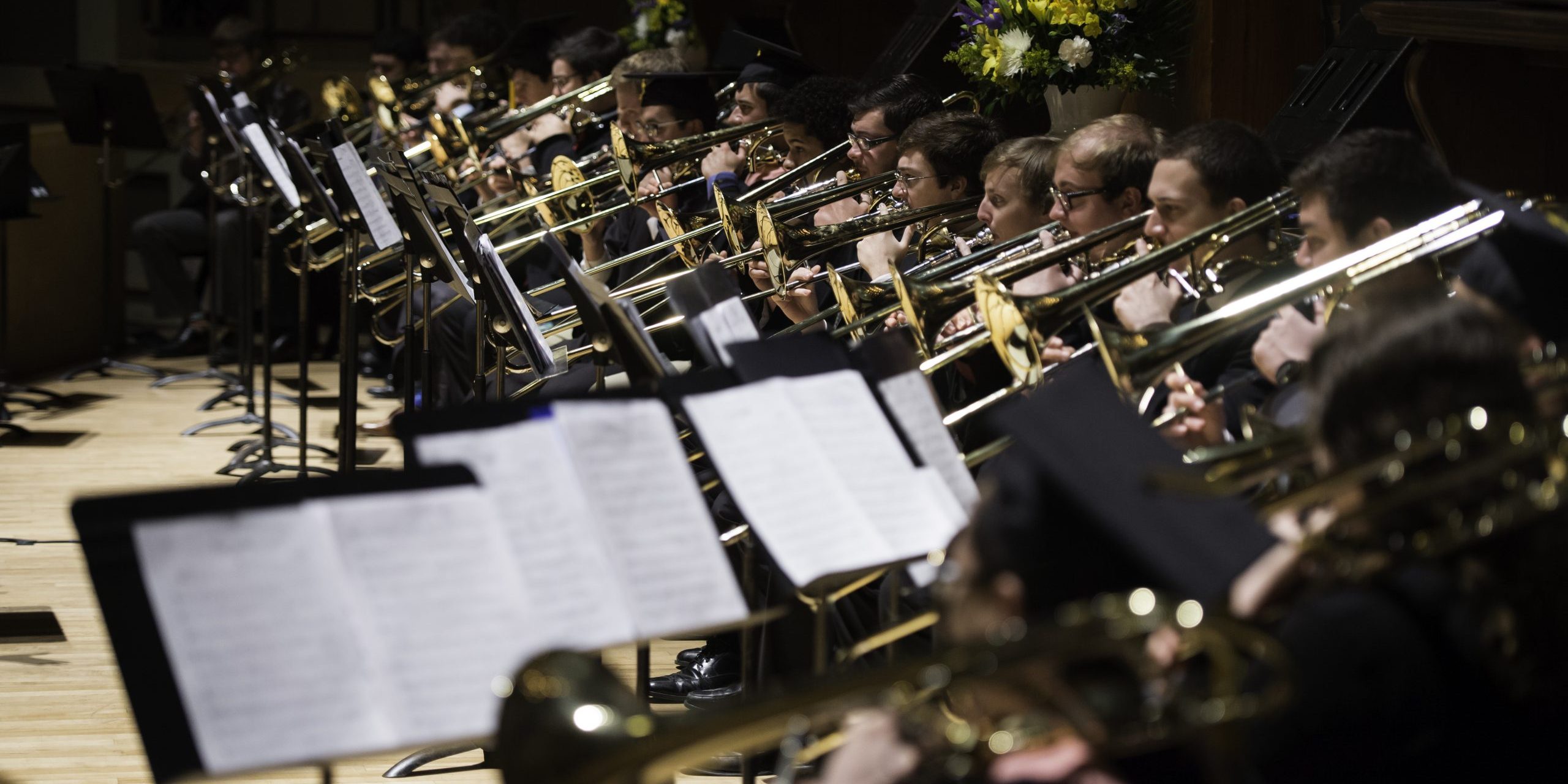 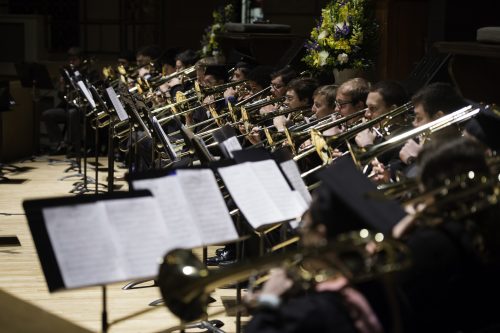 Eastman’s Trombone Choir performs numerous times throughout the school year, and an Eastman Commencement ceremony would not be complete without them. But when its 27 current members, and co-directors Mark Kellogg and Larry Zalkind, take the Kodak Hall stage tonight at 7:30 p.m., it will be much more than an ordinary concert.

This concert is an 80th birthday party for the storied ensemble, founded in 1941 by then-professor of trombone Emory Remington, known as “Chief” to several generations of Eastman trombone students.

Remington died in 1971, but he remains a legend at the school and among surviving alumni of the 50s and 60s. According to Mark Kellogg, he and his colleague Larry Zalkind are continuing a long tradition – and the special guests for tonight’s concert will illustrate that continuity.

Donald Hunsberger ‘54E, ‘59E (MM), ’63 (DMA), who played in the Trombone Choir under Remington as a student, and who directed the Eastman Wind Ensemble for many years, will guest-conduct his own arrangement of J.S. Bach’s Passacaglia in C Minor, a staple of trombone choir literature. 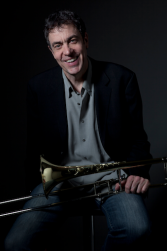 A younger generation of Eastman trombonists will be represented by Michael Davis ‘83E, who will perform his compositions Local Everywhere (with student Evan Silloway), Heartland, and Points West. Davis’s post-Eastman career took him to New York City, where he is now a top-call freelance trombonist; his recent gigs include touring with the Rolling Stones and playing in the pit orchestra of Broadway’s Moulin Rouge.

The presence of Davis and Hunsberger in the concert, says Kellogg, “ties everything together. Both of them got their Eastman degrees decades apart and ended up with extremely successful careers. They were able to take the stuff they learned on Gibbs Street and make it work for them in innovative ways.

“They show that there’s so much more you can do with an Eastman degree than just ‘push and go’ into an orchestra.” In fact, Kellogg adds, Michael Davis will be doing just that during his visit. Besides performing, he’ll speak to Institute for Music Leadership classes, give a trombone master class, and coach jazz players. 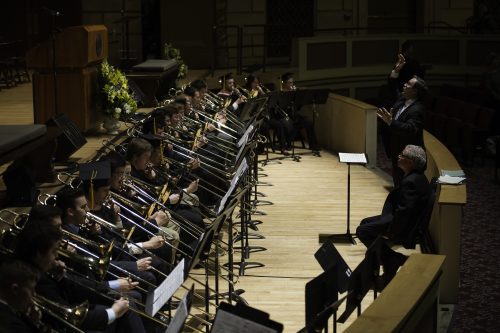 The concert includes music in many styles, including classics by Lotti, Bruckner, and Saint-Saëns, as well as a few more works with an Eastman pedigree by alumni Ethan Cypress, Ken Murley ‘59E, ‘61E (MM), and David Wilborn ‘84E (MM). The program hearkens back 80 years, says Mark Kellogg, and is “a really nice reflection of the Trombone Choir’s contributions. I never had the opportunity to study with Emory Remington, but the partnership of Larry and myself stands on his shoulders.

“With this concert, we want to honor the past … but also advance the cause and move ahead into the future.”

The Eastman Trombone Choir 80th Anniversary Concert takes place tonight, Friday, November 19 at 7:30 p.m. in Kodak Hall. Admission is free and the concert will be livestreamed.