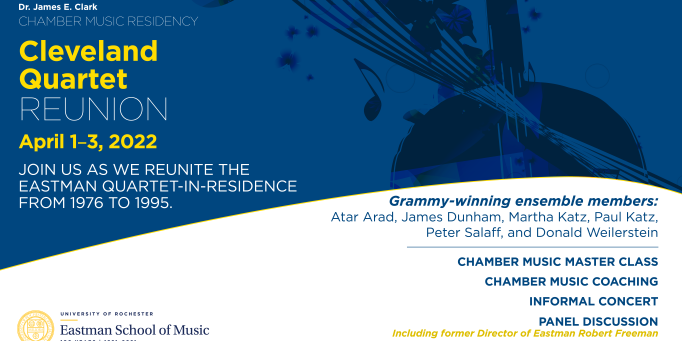 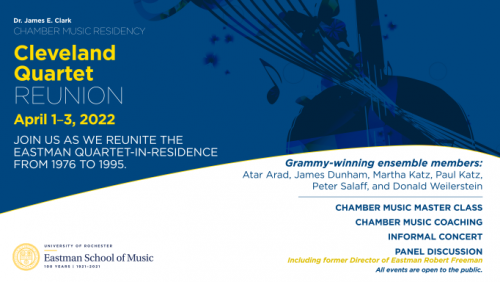 Members of The Cleveland Quartet, Eastman’s quartet-in-residence from 1976 to 1995, will reunite at the Eastman School of Music in April as part of the James E. Clark Chamber Music Residency. The members of this Grammy-winning ensemble who will return to Eastman are Atar Arad, James Dunham, Martha Katz, Paul Katz, Peter Salaff, and Donald Weilerstein, who will all return from April 1-3, 2022. Residency includes:

In addition to members of the quartet, former Dean and Eastman Director Robert Freeman, who hired the Cleveland Quartet in 1976, will also be part of this residency.

David Ying, Associate Professor of String Chamber Music says, “Having the Cleveland Quartet reunited for the Clark Residency connects so many strands of Eastman’s past, present and future. They were and are influential teachers and mentors to me, our quartet, and so many other Eastman string players and alumnae. We are excited to reflect on their great legacy here, and at the same time bring their teaching to our current Eastman students, the musicians who will represent Eastman going forward. We are so proud to welcome the Cleveland Quartet back home to Rochester!”

“How excited and grateful we in the Cleveland Quartet are to Eastman and the Ying Quartet for inviting us back to Rochester!” Paul Katz says on behalf of the Cleveland Quartet, “1976-1996 were glorious CQ years of international touring and recording, and Eastman was our grounding.  The esprit de corps of the Eastman community, the talent,  energy and commitment of our exceptional students and faculty colleagues, provided continual inspiration and regeneration. Our performing career was a heady experience, but teaching, which we all continue today with passion and devotion, has been life’s most fulfilling, satisfying reward. We can hardly wait to re-walk the halls, reunite with old friends and colleagues and relive the wonderful memories of the Eastman years!”

For more than 25 years, almost 20 of them at the Eastman School of Music, the Cleveland Quartet was one of the most respected international string quartets. It was formed in 1968 at the annual summer music institute at Marlboro, Vermont by Cleveland-based musicians: violinists Donald Weilerstein and Peter Salaff, violist Martha Strongin Katz and cellist Paul Katz. They debuted as an ensemble in 1969 in Cleveland and were Eastman’s quartet-in-residence from 1976 to 1995.

All events that are part of the residency are open to the public. For more information visit: esm.rochester.edu/100

About the Cleveland Quartet:

For more than 25 years, almost 20 of them at the Eastman School of Music, the Cleveland Quartet was one of the most respected international string quartets. It was formed in 1968 at the annual summer music institute at Marlboro, Vermont by Cleveland-based musicians: violinists Donald Weilerstein and Peter Salaff, violist Martha Strongin Katz, and cellist Paul Katz. They debuted as an ensemble in 1969 in Cleveland, and became the quartet-in-residence at the Cleveland Institute of Music.

In 1971, the quartet took the same position at the State University of New York in Buffalo and performed its first traversal of the complete Beethoven cycle, which the group would eventually record twice, along with much of the standard repertoire and many contemporary works .

At its height, the Cleveland Quartet became one of the premiere full-time touring ensembles in the world. It ordinarily gave 100 concerts a year, on six continents, at virtually every prestigious summer festival, and including annual appearances at the Mostly Mozart Festival in New York City. It was the quartet-in-residence at the Aspen Festival in Colorado for 20 years.

Throughout the quartet’s lifetime, two members remained constant: Peter Salaff and Paul Katz. Martha Katz was succeeded by Atar Arad and then James Dunham as violist. The ensemble disbanded in 1995. Six of these former members will reunite at Eastman in April for the Clark residency.