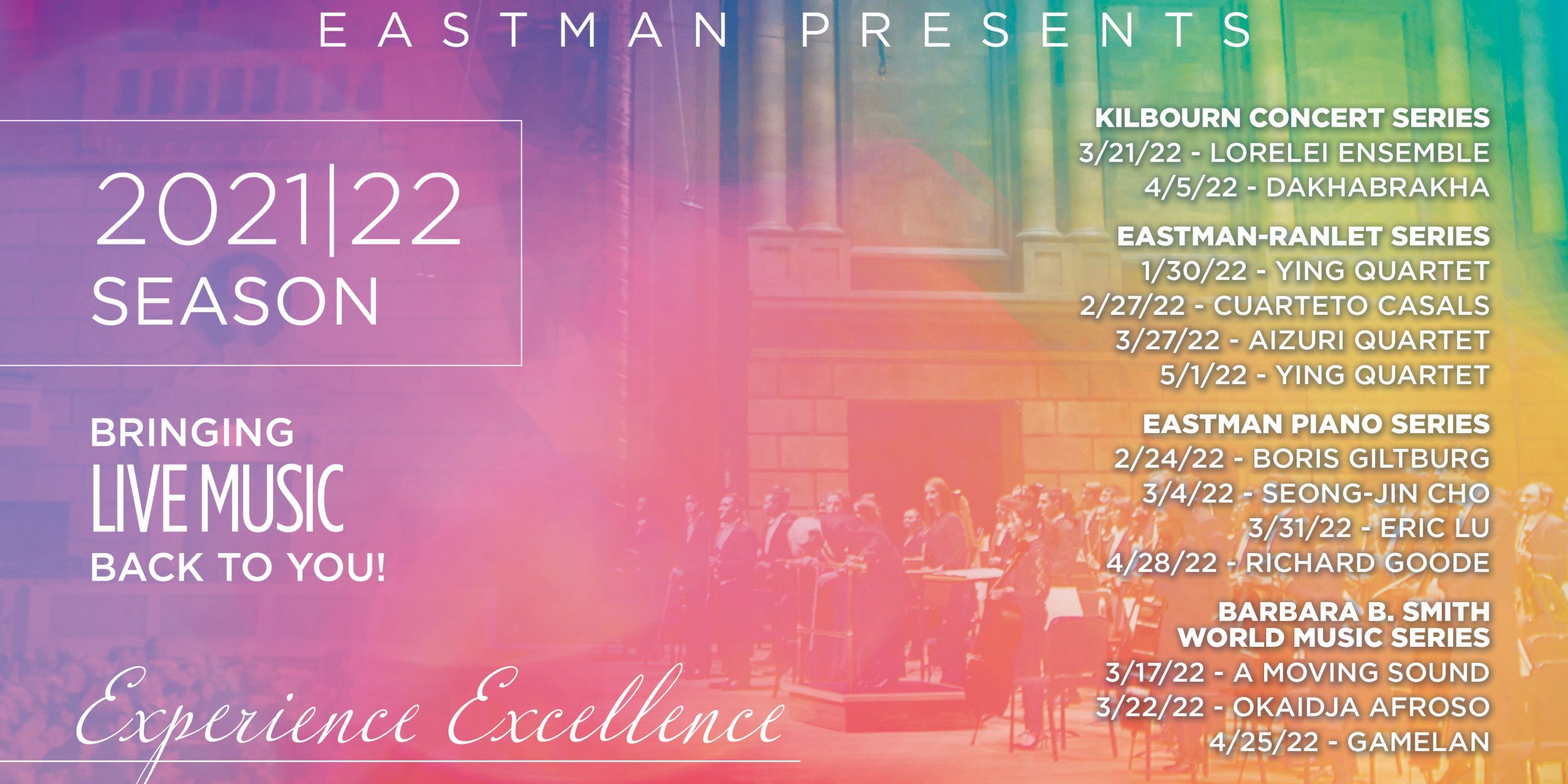 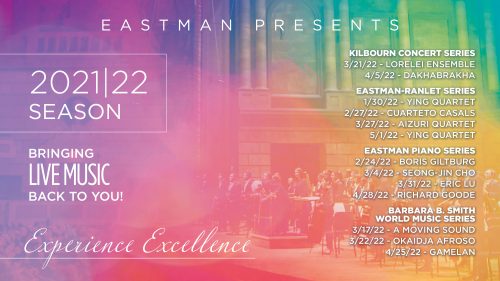 The Eastman School of Music is pleased to announce the details of the 2021-2022 Eastman Presents Season. Concerts in each of the five series feature some of the world’s greatest artists performing in the three jewels at the Eastman School of Music: the acoustic and historic splendor of Kodak Hall at Eastman Theatre; Kilbourn Hall, one of the finest chamber music halls in the world; and Hatch Recital Hall, a gorgeous, modern performance hall.

Tickets to all concerts will be available November 29 and offer the best pricing of the season – including free concerts. Patrons are encouraged to purchase as soon as available to secure the best seats for the most sought-after concerts and receive the highest level of savings. Back this season, discounts will be available.  Pick the concerts that best fit your tastes and personal schedule.

“Eastman is thrilled to bring back our Eastman Presents series for live audiences. With the variety of artists and ensembles in our lineup, Eastman School of Music is once again offering quality and quantity of music at the highest level,” shares Kevin Gibson, Executive Director of Operations at the Eastman School of Music.

A Collaboration with the Rochester Philharmonic Orchestra (RPO)

Widely regarded as one of the major music influencers of our generation, rock sensation Ben Folds joins the Rochester Philharmonic for an evening of genre-bending music, performing hit songs like “The Luckiest”, “Capable of Anything,” and “Landed.” The multi-platinum selling artist, who was a judge for five seasons on NBC’s critically acclaimed a capella show The Sing Off, has recorded numerous solo and collaboration records, including music for film and TV and a classical piano concerto that topped the Billboard charts.

Heralded for its “warm, lithe, and beautifully blended” sound (New York Times) “impeccable musicality” (Boston Globe) and unfailing display of the “elegance, power, grace and beauty of the human voice” (Boston Music Intelligencer), Boston’s Lorelei Ensemble is recognized nationally for its bold and inventive programs that champion the extraordinary flexibility and virtuosity of the human voice.

The Ying Quartet occupies a position of unique prominence in the classical music world, combining communicative performances with a fearlessly imaginative view of chamber music in today’s world. As quartet-in-residence at the Eastman School of Music, the ensemble performs three Eastman-Ranlet Series concerts during the season.

With its astonishingly fresh, sometimes surprising performances, the Cuarteto Casals has quickly established itself as one of the world’s most compelling younger chamber ensembles – and one of the most respected. Blending passionate expressiveness with elegant sophistication, the Barcelona-based players bring immaculate technique to their searching, searing insights.

Praised by The Washington Post for “captivating” performances that draw from its notable “meld of intellect, technique and emotions.” Through its engaging and thought-provoking programs, branded by The New York Times as “genuinely exciting” and “imaginative,” the Quartet has garnered critical acclaim for bringing “a technical bravado and emotional power” to bold new commissions, and for its “flawless” (San Diego Union-Tribune) performances of the great masterpieces of the past.

The young Moscow-born, Israeli pianist is lauded across the globe as a deeply sensitive, insightful, and compelling interpreter.  At home in repertoire ranging from Beethoven to Shostakovich, in recent years he has been increasingly recognized as a leading interpreter of Rachmaninov: “His originality stems from a convergence of heart and mind, served by immaculate technique and motivated by a deep and abiding love for one of the 20th century’s greatest composer-pianists.” (Gramophone).

With an overwhelming talent and innate musicality, Seong-Jin Cho is rapidly embarking on a world-class career and is considered one of the most distinctive artists on the current music scene. His thoughtful and poetic, assertive and tender, virtuosic and colorful playing can combine panache with purity and is driven by an impressive natural sense of balance.

Only in his early twenties, Eric Lu is already a star among pianists of his generation. A pupil of Dang Thai Son, the young American won First Prize at the Leeds Competition in September 2018, where his passionate performance captivated the audience and judges alike.

Richard Goode has been hailed for music-making of tremendous emotional power, depth, and expressiveness, and has been acknowledged worldwide as one of today’s leading interpreters of Classical and Romantic music. In regular performances with major orchestras, recitals in the world’s music capitals, and through his extensive and acclaimed Nonesuch recordings, he has won a large and devoted following.

Okaidja is an Afropop singer-songwriter and multi-instrumentalist from Ghana, West Africa. His unique artistic vision has led him to combine his native rhythms with unforeseen pairings of musical flavors. His sound is a spicy fusion of Ghanaian music with diverse cross-cultural influences. Although most of Okaidja’s hypnotic arrangements are sung in his native language, the meaning shines through. His calling and life purpose is to bring us all together so that we can laugh and grieve and dance and forge forward together, in community.

Tickets will be available November 29, 2021 and may be purchased at the Eastman Theatre Box Office, 433 East Main St. or online at:www.eastmantheatre.org or by calling 585-274-3000