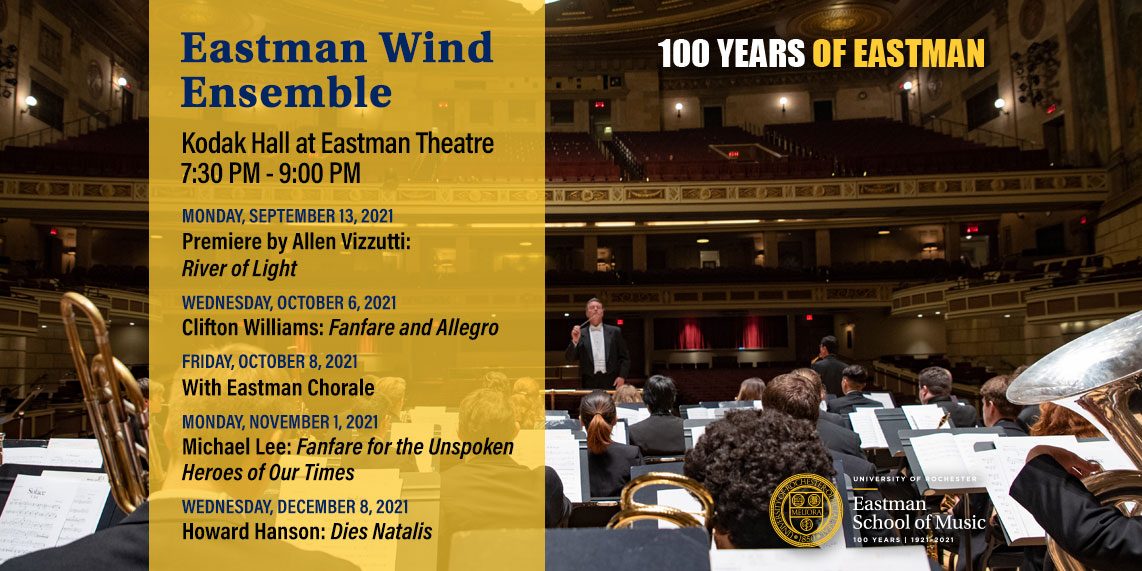 On Monday, September 13, at 7:30 p.m. in Kodak Hall, the Eastman Wind Ensemble (EWE), under its director Mark Davis Scatterday, will present the world premieres and centennial commission, of Allen Vizzutti’s (‘74, ‘76 MM) River of Light, and the world premiere of his work Quasar.

The program also includes Howard Hanson and Mark Scatterday’s Centennial Fanfare No.2 and Joseph Schwantner’s From a Dark Millennium.

“It is certainly my pleasure, as the conductor of the Eastman Wind Ensemble and co-chair of the Eastman Centennial Committee, to welcome Allen Vizzutti back to Eastman for the first EWE concert of the year,” shares director Mark Scatterday. “Allen is certainly one of our most illustrious alumni, earning a bachelor’s and master’s degree in performance, a Performer’s Certificate, a chair in the Eastman Brass Faculty Quintet, and the coveted Artist Diploma. In 2014, Allen was the recipient of the Eastman School of Music Distinguished Alumni Award. The ultimate entrepreneur, Allen represents Eastman’s ideal of an artist, teacher, and professional.

On the EWE concert, Allen will be featured on a new work for trumpet and wind ensemble and will lead his most recent work “The River of Light,” both centennial gifts to the school. He will also direct a clinic for brass players during his stay, as well as other activities. We are so fortunate to have Allen Vizzutti back in Rochester to help kick-off Eastman’s Centennial!”

The Eastman Wind Ensemble and Eastman Wind Orchestra will also be presenting the following concerts in the Fall Season:

American trumpeter, composer, and music educator Allen Vizzutti ’74E, ‘76E (MM) earned bachelor’s and master’s degrees, a Performer’s Certificate, and an Artist’s Diploma from the Eastman School of Music. At home in a multitude of musical idioms, he has visited 40 countries and every state in the union to perform with artists and ensembles including Chick Corea, “Doc” Severinsen, Woody Herman, Japan’s NHK Orchestra and New Tokyo Philharmonic, the Saint Paul Chamber Orchestra, and many others. He has performed on more than 100 movie soundtracks, including Back to the Future and Star Trek.

Eastman alumnus Ivan Trevino ‘06E, ‘10EE (MM) is a Mexican-American composer, percussionist, writer, and arts advocate who has shared his music with audiences from Asia to South America to Madison Square Garden. He is a multi-award-winning recipient of the Percussive Arts Society’s International Composition Contest and has over 70 compositions and songs to his name. He was recently the featured composer on American Public Media’s Performance Today.

Ivan is well-known as a drummer and songwriter with Break of Reality, an international touring cello rock quartet that has released four studio albums. In 2017, Ivan co-founded The Big Trouble with composer and percussionist Drew Worden; they received a Boston Foundation Artist grant in 2017 to record and produce their debut album. An active educator, Ivan is co-director of the Eastman Percussion Festival, has designed and taught courses as Eastman, and was a faculty member of Baylor University’s School of Music.