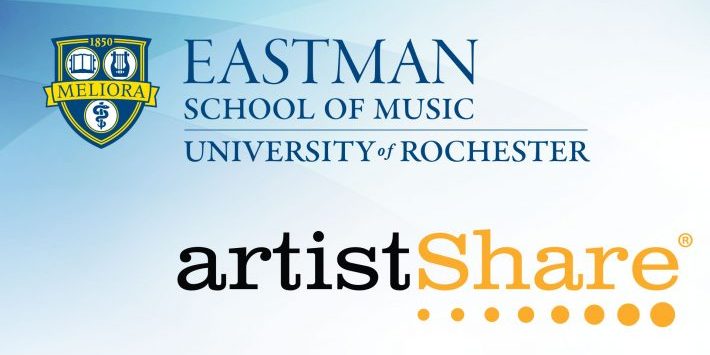 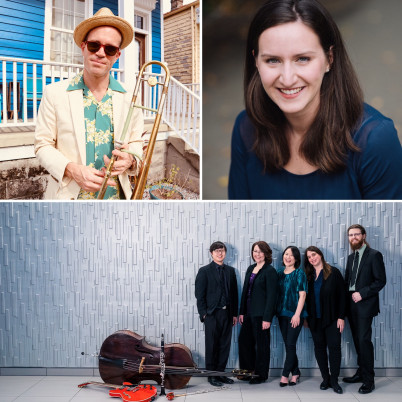 This worldwide platform for outstanding students and alumni also allows artists to connect with fans by sharing their creative processes, documenting their work, and allowing fans to participate directly by funding and observing the creation of new artistic works. Eastman alumnus and multiple Grammy Award winner Maria Schneider (MM85) was the first ArtistShare artist, and continues to share her work through the platform.

“We are thrilled to continue our partnership with ArtistShare,” continues Rachel Roberts. “Awarded through a competitive application process, the participating Eastman students and alums continue to define new pathways and be leaders in creating the future of music.”

About the ArtistShare Artists:

2020 was to be the year that promising Rochester-based new music ensemble fivebyfive released its first studio album, but due to the pandemic this had to be put on hold. Now, fivebyfive –consisting of  flutist Laura Lentz, clarinetist Marcy Bacon (DMA08), guitarist Sungmin Shin (MM11 DMA18), bassist Eric Polenik (MM06), and pianist Haeyeun Jeun (MM08 DMA16) – is relaunching their crowdfunded album through the Eastman School of Music/ArtistShare New Artist program. .

“Having the opportunity to work on this project through ArtistShare with the support of Eastman has been an incredible honor,” says fivebyfive guitarist Sungmin Shin. “It’s humbling for us to join the amazing roster of artists featured on ArtistShare projects from Maria Schneider to Billy Childs, who have won everything from Grammys to Pulitzers.”

The album has been expanded from the initial four pieces inspired by Judith Schaecter’s stained glass on display at the Memorial Art Gallery, to include recordings of the three new works written in response to James Welling’s photographs that were on display this past year at the George Eastman Museum, in the exhibit “Choreograph.” The album includes a bonus track, “a tiny dream,” written by composer, performer, and social justice artist Anthony R. Green. fivebyfive will bring together these artistic visions in their performances of this music as the album “Of and Between.”

The Lynx Project is an art song initiative created by soprano Caitleen Kahn and mezzo-soprano Megan Moore in 2015, after completing their graduate degrees at Eastman. Together with Eastman alumni Steven Humes ‘15E (MM) and Florence Mak ‘17E (DMA), they form the Lynx Project; an ensemble with the goal of bringing the incredible world of art song to a wider audience through intimate and inclusive performances and an exploration of the boundaries of traditional recital form.

“It’s an incredible privilege to share the texts of these young writers, and to celebrate how their words have been interpreted by our composers and performers,” says Caitleen Kahn. “I hope this album not only moves people through its beautiful music and poetry, but opens minds to the voices, stories, and abilities of primarily nonspeaking people. We’re grateful to Eastman and ArtistShare for helping us bring the dream of recording this album to life!”

Charlie Halloran is also a 2021 ArtistShare artist; his album Seven Nights Aboard The Alcoa Clipper is dedicated to the breadth of music coming out of midcentury New Orleans and recognizing its role as the northernmost port of the Caribbean. This album features the sounds likely heard on a 13-day excursion from New Orleans through the Caribbean on the Alcoa Clipper, Corsair, and Cavalier cruise ships.

“New Orleans is the city that gave birth to much of American popular music, and where music remains fully integrated into local culture,” says Charlie Halloran. “It’s hard to separate the city from its musical history, be it the birth of jazz in the 1910s and 1920s, the revival era and Rock and Roll of the 1950s, the sounds of soul and funk in the 1960s, the brass band renaissance beginning in the 1970s, bounce music from the 1990s, and the amalgamation of all these styles readily heard today. I like to picture the Paul Barbarin, Dave Bartholomew, or Louis Armstrong band of the 1950s aboard the Alcoa Steamships, performing music for dancing and incorporating the sounds of the countries visited on these Caribbean cruises. Calypsos from Trinidad, beguines from Martinique, merengue from the Dominican Republic, all played with the rocking and collectively improvised sensibilities of a dance and R&B band out of New Orleans.”

ArtistShare was founded in 2001 as the internet’s first crowdfunding platform, connects artists with fans in order to share the excitement and beauty of the creative process. The ArtistShare roster includes some of today’s most prestigious artists including Pulitzer Prize- and Oscar-nominated writers, Guggenheim fellowship recipients, Doris Duke Foundation Recipients, NEA Jazz Masters, and Eastman alumna, composer, and orchestra leader Maria Schneider. ArtistShare projects have received 32 Grammy nominations and 11 Grammy awards.