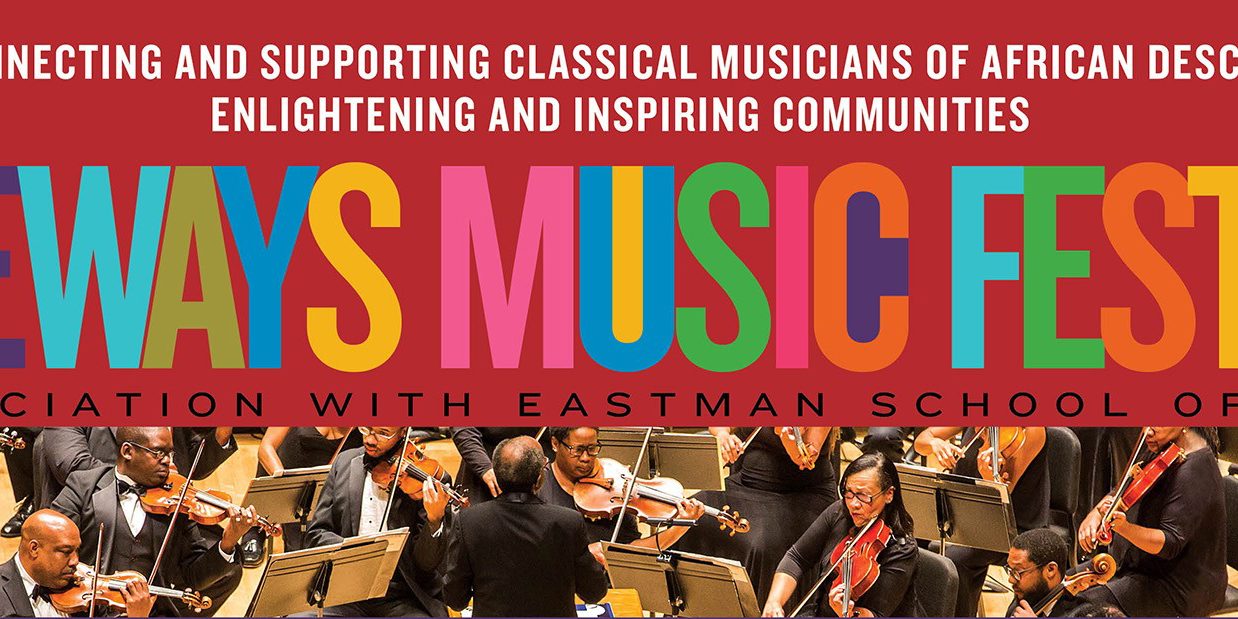 A Gateways Orchestra concert in New York City’s famed Carnegie Hall will highlight the 2022 Gateways Music Festival, in association with Eastman School of Music, according to plans announced today.

The Festival was initially scheduled for this November, with a Rochester kick-off, but was rescheduled to next Spring due to the coronavirus pandemic. The new Festival dates are April 18 through April 24, 2022.

In Rochester from April 18 through April 20, the Festival will feature a series of recitals, talks, a film screening and a panel discussion.  It will conclude with a Gateways Orchestra concert in Kodak Hall at Eastman Theatre on Wednesday, April 20, at 7:30 p.m.

Gateways will then travel to New York City for a similar series of events, April 21 through April 24, culminating in the Orchestra’s debut concert at Carnegie Hall in Stern Auditorium at 3:00 p.m. on April 24.

“We are delighted to be presenting the Gateways Music Festival Orchestra this season in the ensemble’s Carnegie Hall debut,” said Clive Gillinson, Carnegie Hall’s Executive and Artistic Director.  “We have long been inspired by the festival’s commitment to extraordinary artistry as it celebrates the many contributions that musicians and composers of African descent continue to make to classical music. We look forward to introducing the Gateways musicians to our audiences as they embark upon their residency, connecting with music lovers throughout New York City.”

The invitation to perform during Carnegie Hall’s 2021-2022 season came shortly after the extraordinarily successful 2019 Festival – Gateways’ largest to date, with 17 public performances and more than 40 community-based performances in Rochester.

“Taking our Made in Rochester festival on the road has been a long-held dream for the Gateways musicians,” said Lee Koonce, Gateways’ President & Artistic Director.  “There is so much power in seeing the Gateways musicians as well as hearing them, so they are thrilled to have this opportunity.”

The 2022 Festival includes the world premiere of a Gateways-commissioned work composed by Jon Batiste, the Oscar-winning, GRAMMY-nominated musician and music director for The Late Show with Stephen Colbert.  The yet-untitled composition, created for a full orchestra and narrator, will be premiered as part of Gateways’ Carnegie Hall program.

In addition to the Batiste premiere, the Orchestra’s repertoire will include Variations on a Theme by Haydn by Johannes Brahms; Sinfonia No. 3 by George Walker, in celebration of 100th anniversary of his birth; Symphony No. 3 in C Minor by Florence Beatrice Price; and James Cockerham’s Fantasia on Lift Every Voice and Sing, the Orchestra’s signature piece.  The Kodak Hall concert will include this entire program with the exception the Batiste work.

Gateways’ Around the Town, formerly known as Chamber Music in the Community, will take place on April 22, with five chamber music groups made up of guest artists from leading symphony orchestras and professional chamber music ensembles. These groups will perform at the Morgan Library & Museum, the Metropolitan Museum, 92nd Street Y, the Schomburg Center for Research in Black Culture and the New York Public Library for the Performing Arts.  A culminating chamber music recital, featuring all of the chamber music groups, is scheduled for April 23 at a New York City location to be determined.  Around the Town and the culminating chamber music recital will take place in New York City only.

The Festival’s guest artists will be the internationally-renowned, GRAMMY-nominated Imani Winds woodwind quintet, who are scheduled to appear at the historic Abyssinian Baptist Church in Harlem on Thursday, April 21.  The quintet will not appear in the Rochester portion of the Festival.

“The extraordinary volunteer and financial support of our Rochester community has made this growth and opportunity possible for our Gateways musicians,” said Festival Board Chair, soprano Kearstin Piper Brown.  “We are deeply grateful and are looking forward to celebrating this success and the 2022 Festival with all of you.”

Commenting on the relationship between Gateways Music Festival and the Eastman School of Music, Jamal Rossi, Joan and Martin Messinger Dean of the Eastman School of Music, said “Eastman’s association with Gateways Music Festival is of great importance to the School, the University, and the Greater Rochester community.  As Eastman celebrates its Centennial, we are thrilled that Gateways will return to Rochester in 2022 and excited to support this amazing opportunity to present the Gateways musicians to New York City audiences.”

The mission of Gateways Music Festival is to connect and support professional classical musicians of African descent and enlighten and inspire communities through the power of performance. Founded in 1993 by concert pianist and former Eastman School of Music associate professor Armenta Hummings Dumisani, Gateways brings 125 select musicians to Rochester, New York, from across the United States and beyond for more than 50 performances at concert halls and community venues throughout the region. In May 2016, Gateways Music Festival formally associated with the Eastman School of Music, a Festival partner since 1995.

Gateways Black Lives Matter Statement.  Gateways’ board of directors and musicians released a Black Lives Matters statement in support of the movement and to encourage charitable foundations, corporations, and governmental agencies to increase their financial support for organizations led by and serving Black classical musicians.

The Eastman School of Music was founded in 1921 by industrialist and philanthropist George Eastman (1854-1932), founder of Eastman Kodak Company.  It was the first professional school of the University of Rochester. Mr. Eastman’s dream was that his school would provide a broad education in the liberal arts as well as superb musical training. The current dean is Jamal Rossi, appointed in 2014.

More than 900 students are enrolled in the Collegiate Division of the Eastman School of Music—about 500 undergraduates and 400 graduate students. They come from almost every state, and approximately 23 percent are from other countries. They are taught by a faculty comprised of more than 130 highly regarded performers, composers, conductors, scholars, and educators. They are Pulitzer Prize winners, Grammy winners, Emmy Winners, Guggenheim Fellows, ASCAP Award recipients, published authors, recording artists, and acclaimed musicians who have performed in the world’s greatest concert halls. Each year, Eastman’s students, faculty members, and guest artists present more than 900 concerts to the Rochester community. Additionally, more than 1,500 members of the Rochester community, from young children through senior citizens, are enrolled in the Eastman Community Music School.