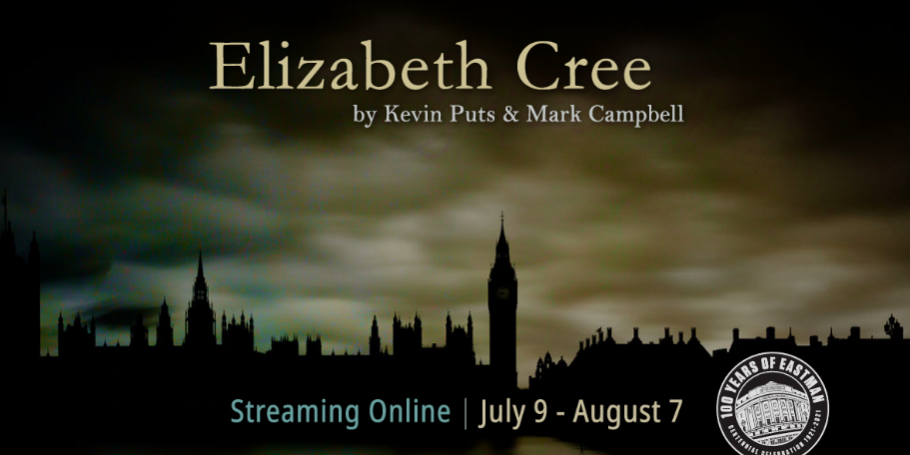 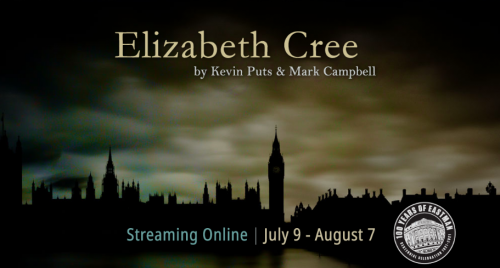 Eastman Opera Theatre (EOT) is thrilled to premiere Elizabeth Cree, released for on-demand streaming starting July 9.This suspenseful and highly theatrical opera, with music by Pulitzer Prize-winning Eastman alumnus Kevin Puts ‘94E and a libretto by Mark Campbell, is based on the novel The Trial of Elizabeth Cree by Peter Ackroyd. This production will be directed Stephen Carr and music directed by Timothy Long.

Elizabeth Cree ingeniously interweaves several narratives: the trial of the heroine for the poisoning of her husband; a series of brutal murders committed by a Jack the Ripper-style killer; the spirited world of an English music hall; and, finally, some “guest appearances” by luminaries from the Victorian Age.

“In many ways, Elizabeth Cree is about the disguises and masks we all wear as we navigate the world, so of course this metaphor is perfect for a moment when we are all required to wear literal masks in order to bring the piece to life.” says Stephen Carr, Associate Artistic Director of Eastman Opera Theatre. “Kevin and Mark have both been extremely generous with their time and support, and our students have had the incredible opportunity to ask their questions directly of the opera’s creators. Despite its short runtime, Cree is so deliciously complex. It flies along from location to location at a truly cinematic pace that, again, makes it a perfect project for this stage-meets-film sandbox in which we’ve all been playing this year.”

Elizabeth Cree is a Rochester premiere and features a cast of 21 students. A video of the production will be available online for on-demand streaming from July 9 through August 7.

“2020-2021 brought many challenges as we strove to stay productive. At Eastman, we had strict protocols that included masking, ‘airing out’ periods, and distancing protocols that made full rehearsals impossible. It would have required spacing of 12 feet between each singer and there are no spaces large enough at Eastman. But our students excelled.” Said Timothy Long, EOT Music Director. “Despite the difficulties, they prepared meticulously and sounded fantastic at every stage of preparation. We were not able to have any official rehearsals with both singers and orchestra, or many staging rehearsals with piano. But our orchestra arrived with wonderful attitudes and played beautifully. Once we recorded the orchestra in the Ray Wright Room, we recorded and layered the singers over them in Kodak Hall.”

He continued, “In this year when much of the music world stopped, we continued. I am so thrilled that we were able to offer these opportunities to our students. Most of all, I am proud of all our singers, orchestra, and staff that persevered with a great sense of spirit. I am also thrilled that we are able to do that with this brilliant composition written by my friends Kevin and Mark.”

Elizabeth Cree began rehearsing in February with the idea of filming the opera on the Kodak Hall stage. Working within the physical circumstances of Kodak Hall this year, scenic designer Daniel Hobbs drew upon the existing space of the hall itself. And working with the school’s health guidance for room capacity and wearing masks––especially for singers––Rich Wattie of T&MP pre-recorded and mixed all the audio tracks. Timothy Long separately conducted the orchestra in a recording room while a camera captured him on video. That video of Long conducting the orchestra was then played-back for masked singers to record their vocal tracks to. Needing to mask the singers, Nicole LaClair designed their costumes with specially created masks in mind.

Winner of numerous prestigious awards, including the 2012 Pulitzer Prize for his debut opera Silent Night, Kevin Puts has been commissioned, performed, and recorded by leading ensembles and soloists throughout the world, including Yo-Yo Ma, Renée Fleming, Jeffrey Kahane, Dame Evelyn Glennie, the New York Philharmonic, the Tonhalle Orchester (Zurich), the St. Paul Chamber Orchestra, the Miro Quartet, and the symphony orchestras of Baltimore, Cincinnati, Detroit, Atlanta, Colorado, Houston, Fort Worth, St. Louis, and Minnesota. His newest orchestral work, The City, was co-commissioned by the Baltimore Symphony Orchestra in honor of its 100th anniversary and by Carnegie Hall in honor of its 125th anniversary. Letters From Georgia, written for soprano Renée Fleming and based on the personal letters of Georgia O’Keeffe, had its world premiere in New York in Fall 2016, and his first chamber opera, an adaptation of Peter Ackroyd’s gothic novel The Trial of Elizabeth Cree commissioned by Opera Philadelphia, had its world premiere in September 2017, followed by performances with Chicago Opera Theater in February 2018. Kevin is currently a member of the composition department at the Peabody Institute and the Director of the Minnesota Orchestra Composer’s Institute. Learn more about Kevin Puts ‘94E.

Mark Campbell’s work as a librettist is at the forefront of the contemporary opera scene in this country. A prolific writer, Mark has created 39 opera librettos, lyrics for seven musicals, and the texts for six song cycles and two oratorios. His works for the stage have been performed at more than 90 musical venues around the world and the names of his collaborators comprise a roster of the most eminent composers in classical music and include three Pulitzer Prize winners. Mark’s best-known work is Silent Night, which received a Pulitzer Prize in Music and is one of the most frequently produced operas in recent history. Learn more about Mark Campbell.

Finishing out the EOT season will be Postcard from Morocco by Dominick Argento and John Donahue, streaming online August 13-September 13.