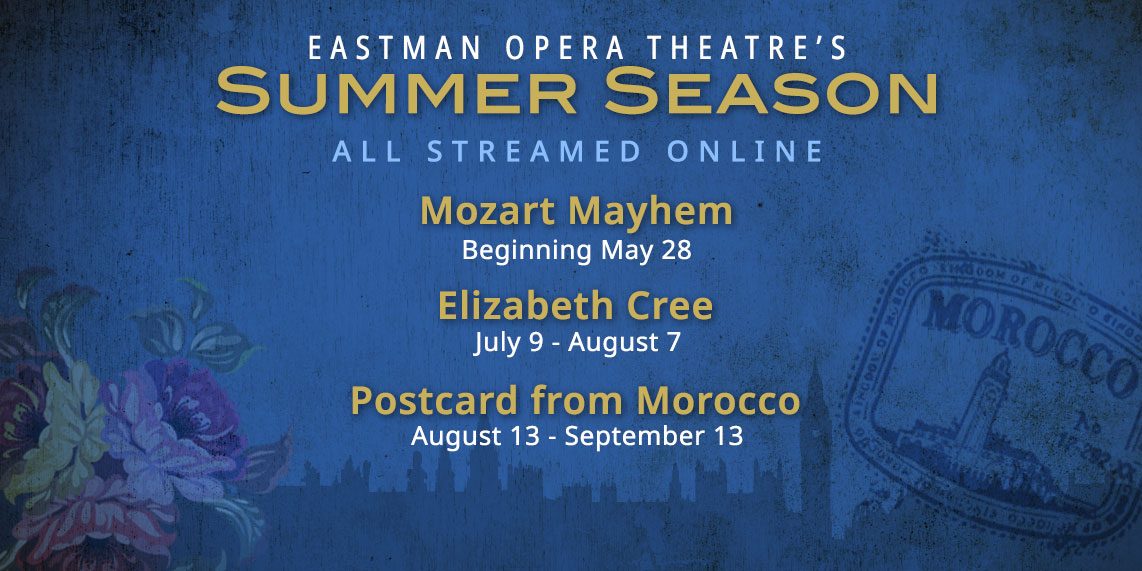 Eastman Opera Theatre (EOT) is thrilled to premiere Mozart Mayhem, released for on-demand streaming starting May 28.Mozart Mayhem will bring an inventive, immersive twist to scenes and arias from three of the composer’s most beloved operas:  Le nozze di Figaro, Così fan tutte, and Die Zauberflöte. The selections of scenes and arias have been reimagined for site-specific, outdoor performances set amidst the unique landscape and architecture of Rochester. This production will be directed by Madeleine Snow (current MM degree candidate) and music directed by Wilson Southerland.

Mozart Mayhem has been a great opportunity for students at Eastman to prepare and perform partial roles and opera scenes. EOT conducted music and staging rehearsals at Eastman, as they do with traditional opera productions, but rehearsed and ultimately filmed off-site in outdoor spaces in Rochester, including both the Sunken Garden at Highland Park as well as various locations around Ellison Park. For this project, the audio, including vocals, piano, and flute, was pre-recorded to achieve the highest possible musical quality while filming outdoors. The singers, all fully masked, following all the COVID-19 safety protocols, allowed in-person collaboration at these special Rochester locales.

“As a director,” said Madeleine Snow, “I think that this kind of site-specific work is an exciting way to bring something new and fresh to beloved classics, to explore places around Rochester that can be reimagined for performance, and to experiment with new ways of creating opera.”

Finishing out the EOT season will be Elizabeth Cree by Kevin Puts and Mark Campbell, streaming online July 9-August 7, and Postcard from Morocco by Dominick Argento and John Donahue, streaming online August 13-September 13.