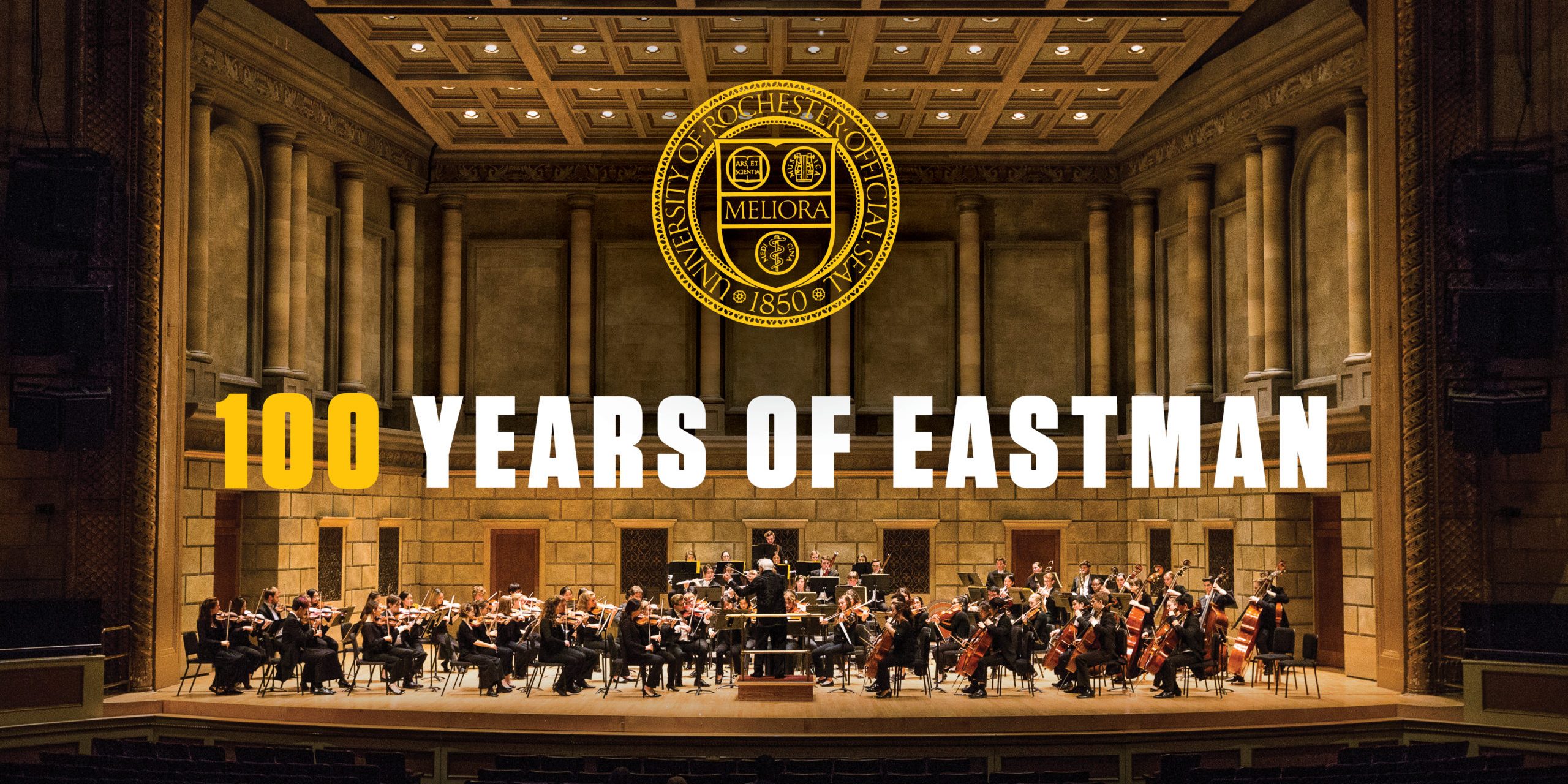 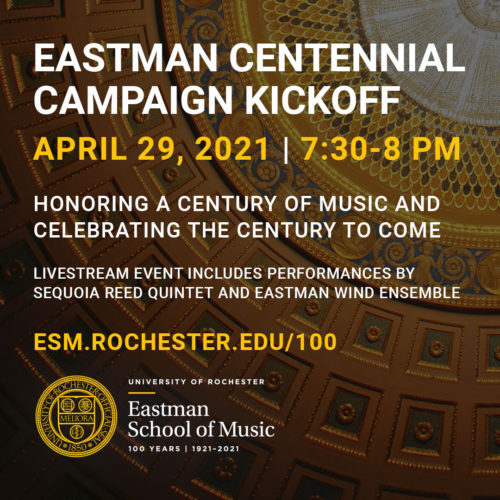 The University of Rochester’s Eastman School of Music publicly launched its centennial fundraising campaign with a livestreamed virtual event from Kodak Hall at Eastman Theatre on Thursday, April 29. The entire event is available for viewing at https://www.esm.rochester.edu/100.

Co-hosted by University of Rochester President Sarah Mangelsdorf and Eastman School of Music Dean Jamal Rossi, the event marks a milestone moment in the Eastman Centennial Campaign. With more than $50 million already raised during a campaign quiet phase, the campaign seeks to raise a total of $100 million to ensure the school’s second century of excellence.

Fundraising will support three priority areas: scholarships for talented student musicians; the recruitment and retention of exceptional faculty; program support for emerging studies such as film and video game scoring and arts leadership, and innovative programs that bridge music and medicine.

Campaign co-chairs and University trustees Joan Beal ’84E and Cathy Minehan ’68, and University of Rochester trustee Tim Wentworth and his spouse Robin Wentworth, also spoke at the virtual kickoff event. All four are generous supporters of the Eastman Centennial Campaign and spoke about the significant role music had in their own lives and for each of their families.  “When I was growing up, there weren’t a lot of leadership opportunities for women. Being involved in music, orchestra, or the band…was where you learned to develop skills you could feel good about, that you could demonstrate to other people,” said Minehan. “I look at music as an absolute foundational life experience. Music has done so much for me, I’m proud to now be able to support Eastman,” she added.

“Music—and Eastman’s role in it—has been vital to the human experience since Eastman’s founding 100 years ago,” said President Mangelsdorf.  “As we celebrate Eastman’s centennial, we’re also celebrating its long-standing reputation as a place where the world’s best musicians come together to reach new levels of creativity, virtuosity, and global impact.”

Dean Rossi reinforced the importance of the Eastman Centennial Campaign in propelling Eastman into its second century of excellence in musical artistry, scholarship, leadership, and community engagement. “Our primary objective is to increase support for student scholarships so that every qualified student can afford to experience an Eastman education,” Rossi said. “We are deeply grateful to the many friends and patrons whose generosity enables Eastman to be a special place where dedicated artist-faculty members inspire future generations of musicians to enrich communities across the world through their music.”

The Eastman School of Music, established in 1921, will more formally mark its Centennial beginning in fall 2021. The celebration continues throughout 2022 with world-premieres of more than forty new compositions and fanfares composed by preeminent composers; acclaimed guest artists performing alongside Eastman’s ensembles; national academic and music conferences; alumni events throughout the country; a documentary being produced in partnership with WXXI, and more. Some particular highlights include: “Opening of the Doors,” a community-driven celebration scheduled for March 3-6, 2022; “100 concerts to celebrate 100 years”; and a Meliora Weekend celebration in fall 2022.

Media clips of Dean Rossi and President Mangelsdorf’s remarks and clips of the student performances are available upon request. For more information on the Eastman Centennial, including the full campaign kickoff broadcast, feature stories, future events, videos, testimonials, ways to engage, and more, please visit our Centennial website at https://www.esm.rochester.edu/100

The University of Rochester is one of the nation’s leading private research universities, one of only 62-member institutions in the Association of American Universities. Located in Rochester, New York, the University gives undergraduates exceptional opportunities for interdisciplinary study and close collaboration with faculty through its unique cluster-based curriculum. Its College, School of Arts and Sciences, and Hajim School of Engineering and Applied Sciences are complemented by the Eastman School of Music, Simon School of Business, Warner School of Education, Laboratory for Laser Energetics, School of Medicine and Dentistry, School of Nursing, Eastman Institute for Oral Health, and the Memorial Art Gallery.