The Beal Institute Presents: Visual Music 3.0: An Evening of Original Music Performed Live-to-Picture by the Empire Film and Media Ensemble 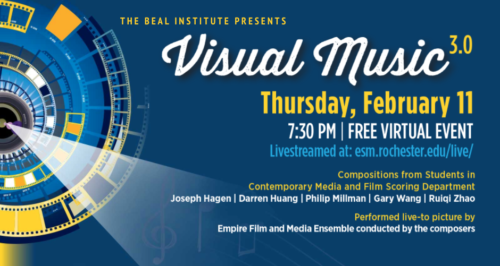 The Beal Institute, under the direction of Associate Professor Mark Watters, presents “Visual Music 3.0: An Evening of World-Premiere Film and Music Collaborations,” Thursday, February 11 at 7:30 p.m. at the Eastman School of Music. Visual Music will be presented through livestream as a virtual performance.

The program shows off an enormous variety of styles, including the classic Disney short “The Old Mill” from 1937 and an excerpt from  a popular “Tom and Jerry” movie, “Shiver Me Whiskers,” from 2006. Excerpts from two popular nature documentary series, “The Blue Planet” and “Veneficus”, will also be featured.  Additionally. Eastman student Joe Hagen has created an original film, “Zoom Out” that explores humanity’s place in the Universe, and the program also includes an original film from RIT students, Taotie. Finally, the concert will feature two different scores to the same short film: “Somos Tierra”, an emotional drama about family, home, and the importance of traditions. The audience will have a unique opportunity to view a short, nine-minute film twice, with two different musical scores.

“I am very proud of the class of 2021,” shared Mark Watters, an Emmy Award-winning conductor and composer and director of the Beal Institute. “This will be a night of premieres conducted and performed by an extraordinary group of young artists.”

The Visual Music performance will be livestreamed at http://www.esm.rochester.edu/live and will be free to view. The stream will start approximately 15 minutes before the event.

Students in the Beal Institute have opportunities to work with established visiting artists: professional composers, arrangers and musicians who are actively engaged in the film, television and video game industry. Students are also encouraged to collaborate on cross-disciplinary and multi-media projects with other students, faculty members from humanities, composition, and other Eastman departments, community arts organizations, and other area universities. The Institute enhances the graduate degree program in convergent media and film music.