2020 at Eastman: A Year in Photographs 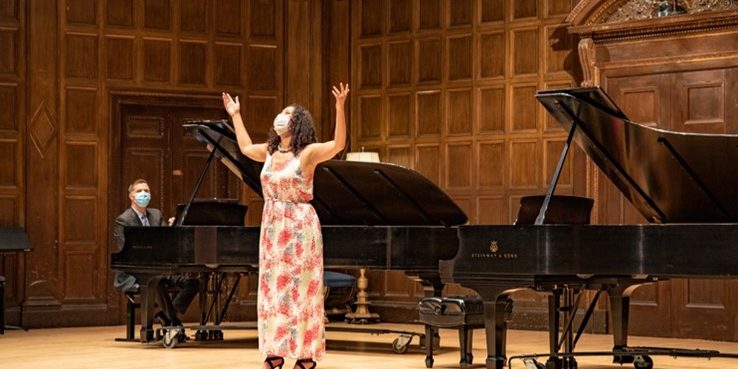 2020 was a memorable year, but even with much less activity on the Eastman campus after March, it produced some memorable photographs. As you’ll see below, we traveled from the typical bustle of the beginning of the semester, to virtually no activity on the Eastman campus during the spring and summer, to resuming most of our activities in the fall, strictly following social distancing and other health protocols.

Most of these photographs are by Eastman Senior Creative and Design Manager Michelle Martorell, with comments from her. 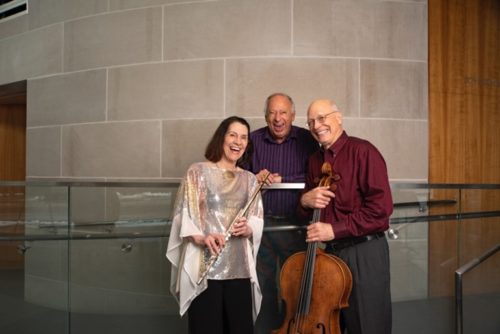 “While photographing professors Bonita Boyd, Barry Snyder, and Steve Doane for their Aquarelles CD at the beginning of last semester, after a few shots they relaxed enough to tell jokes, and in this picture they were cracking up laughing. You can tell they work and play well together.” 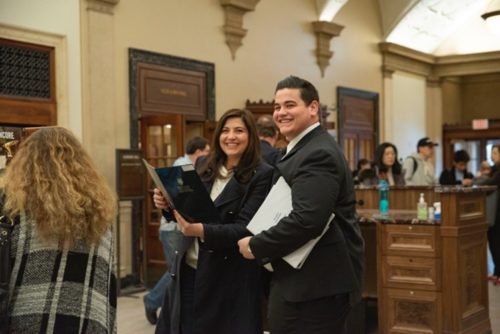 “During audition days each winter, I always try to catch the parents and the students nervously walking around Lowry Hall. This mother and son were the exception and really seemed to be enjoying the Eastman experience.” 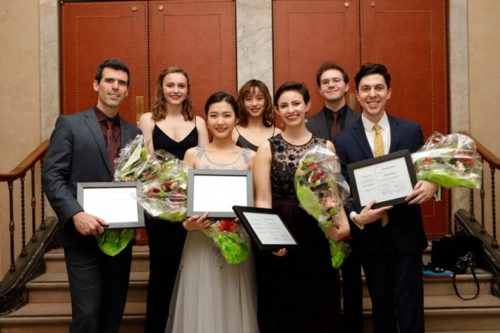 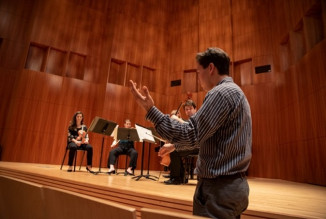 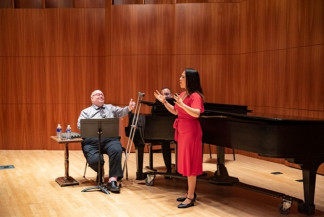 “In photographing master classes, it is very difficult to capture the connection between the professional and the students. I was in a few master classes before we shut down and was able to capture the concentration and fun the students experience during these intensive events.”  At left, string students with a member of the visiting Schumann Quartet; at right, Luisa Hidalgo, soprano, and Jonathan Mamora, piano, in a master class with Craig Rutenberg. 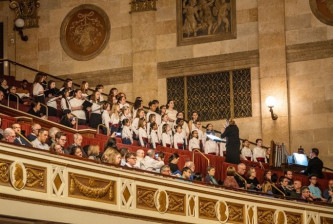 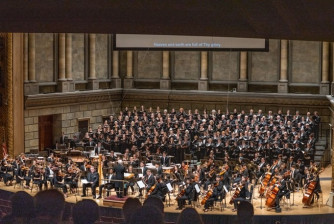 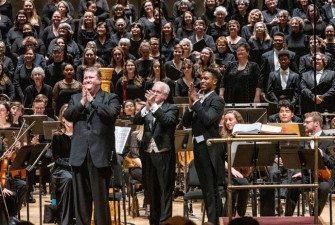 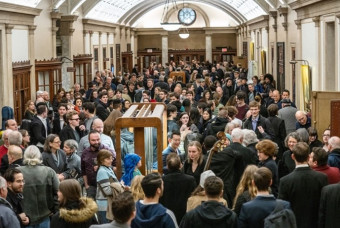 “After months of preparations and promotion, Britten’s War Requiem was able to go on stage just before we shut down all performances in Kodak Hall. Photographer John Schlia was able to take these images; the last one is especially poignant, because it showed the joyful camaraderie in Lowry Hall after a performance. How much we missed this in the months that followed.” 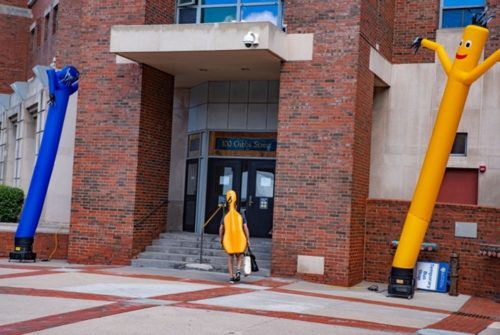 “A long hiatus followed during spring and summer … no pictures were taken between March and August. Finally, I could go back and at least take photos of the Class of 2024’s move in day in late August. It was a completely different scene from previous years. This picture for me captured the desolation caused by the pandemic compared to the happy pandemonium of years past. It was bittersweet to say the least.” 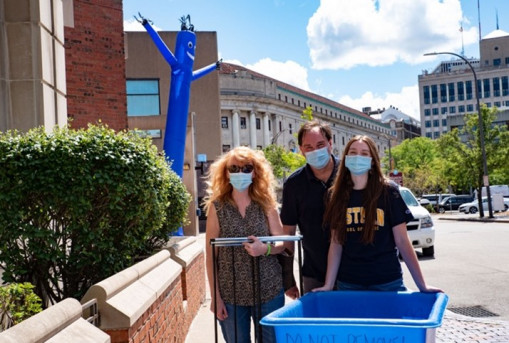 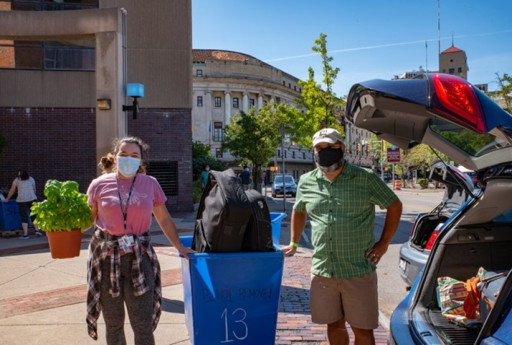 “Still, joy was also happening: proud parents helping their kids figure out how to get their stuff into their rooms, and saying goodbye for the semester. At least some of the usual bustle of move-in day was not entirely lost.” 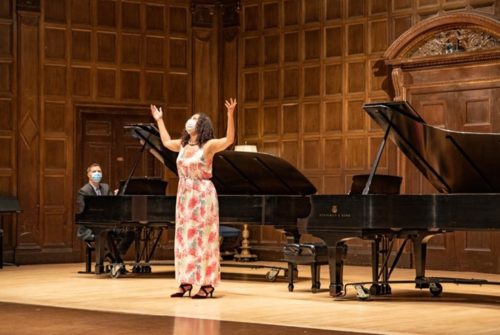 Our first virtual Convocation was so empty, and the camera shutter seemed so loud, that Michelle took fewer photos than usual … but, she adds, “I was happy to capture Assistant Professor of Voice Nicole Cabell’s triumphant ending to her performance with Professor of Piano Joseph Rackers.” 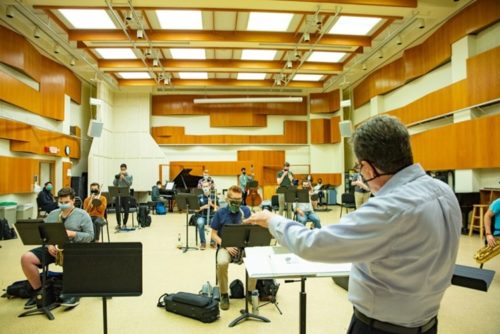 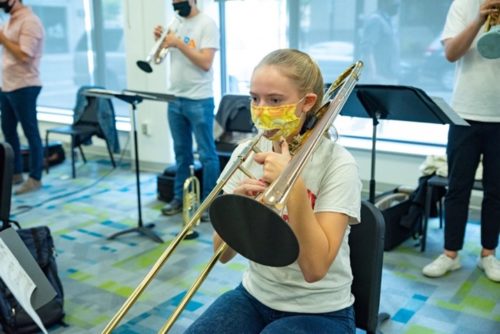 While other schools were not holding any classes, rehearsals, or concerts this fall, Eastman did all three! Our ensemble conductors and performance faculty figured out how to have full rehearsals and came up with inventive solutions — including social distancing and learning how to play wind and brass instruments while wearing masks. 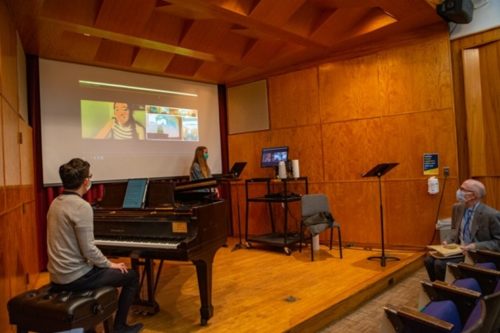 Professor Russell Miller’s Graduate Voice Repertoire class was held in person in Hanson Hall and virtually, with students taking part from other states and countries. 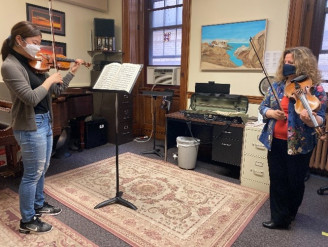 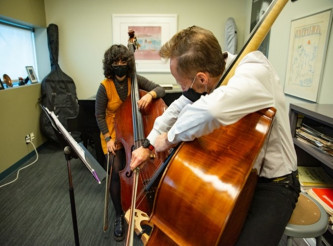 “Studio classes also demonstrated social distancing and other precautions. While I photographed, I enjoyed the banter between professors and their students (Professor Renée Jolles with Jaewon Jun, left, and Professor James VanDemark with Samantha Donato, right) and their students, pointing out all the musical nuances only they would notice. I sure learned a lot!” (Photograph of Jolles/Jun by Courtney Morton; VanDemark/Donato by Michelle Martorell) 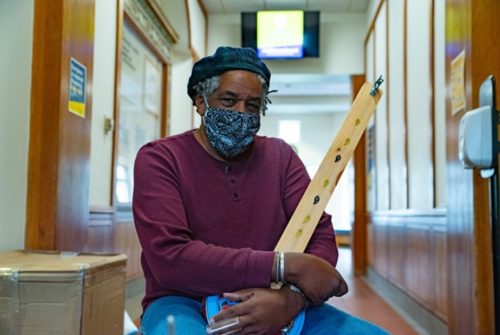 Michelle arrived to photograph the Student Living Center’s Front Desk Staff Assistant, Joe Broadus, during an especially hectic day dealing with multiple Amazon deliveries, parent care packages, and students looking for things. “He was finally able to stop to explain his hands-on event, in which students would make instruments from everyday objects, and kindly posed for a great shot. Thanks, Joe!” 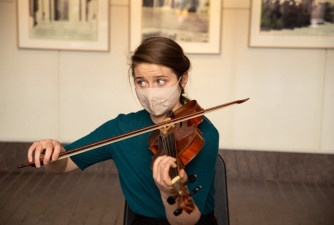 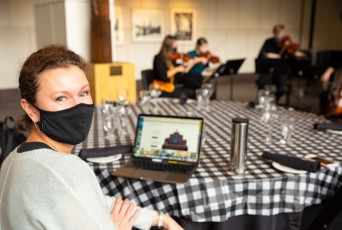 “It’s all in the eyes… One of the few things that musical students probably missed the most performing virtually was eye contact.” Michelle captured a performance by a student string quartet during the Eastman@Washington Square virtual concert on November 5; second violinist Lydia Becker is following the cues from the lead violinist in the group. She also captured Artistic Director Irina Lupines and (in the distance) the entire quartet performing. The show must go on! 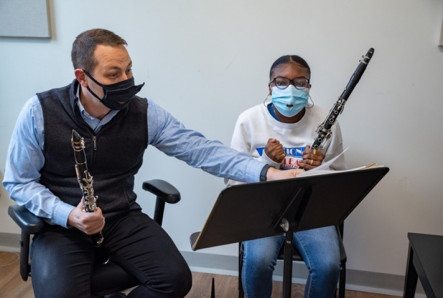 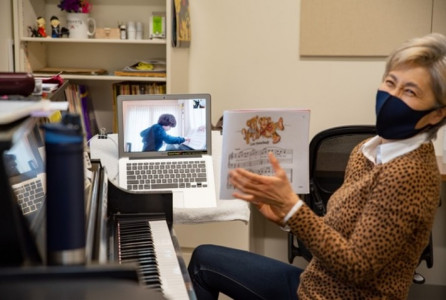 Eastman Community Music School  also proved that classes – and fun, creative duets between teachers and students — were still possible… even during a pandemic. 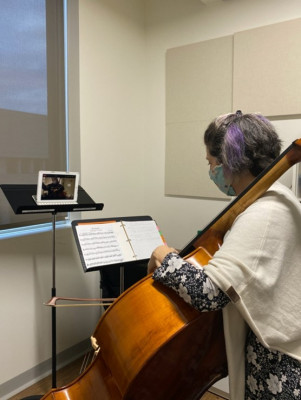 “It was really a different experience photographing a teacher giving a Zoom lesson. Although the lesson couldn’t be in person, the teacher and student were still able to work together!” (Photograph by Courtney Morton) 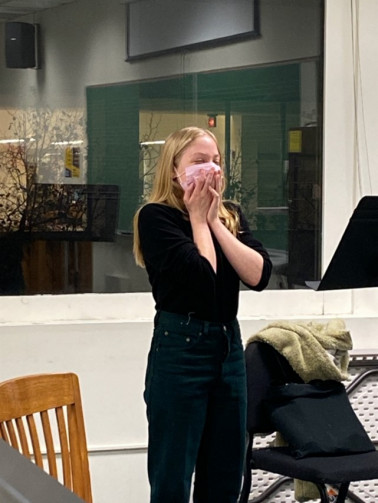 “A student’s excitement after working towards, and hitting, a high note. Her expression in this picture really captures her emotion!” (Photograph by Courtney Morton)