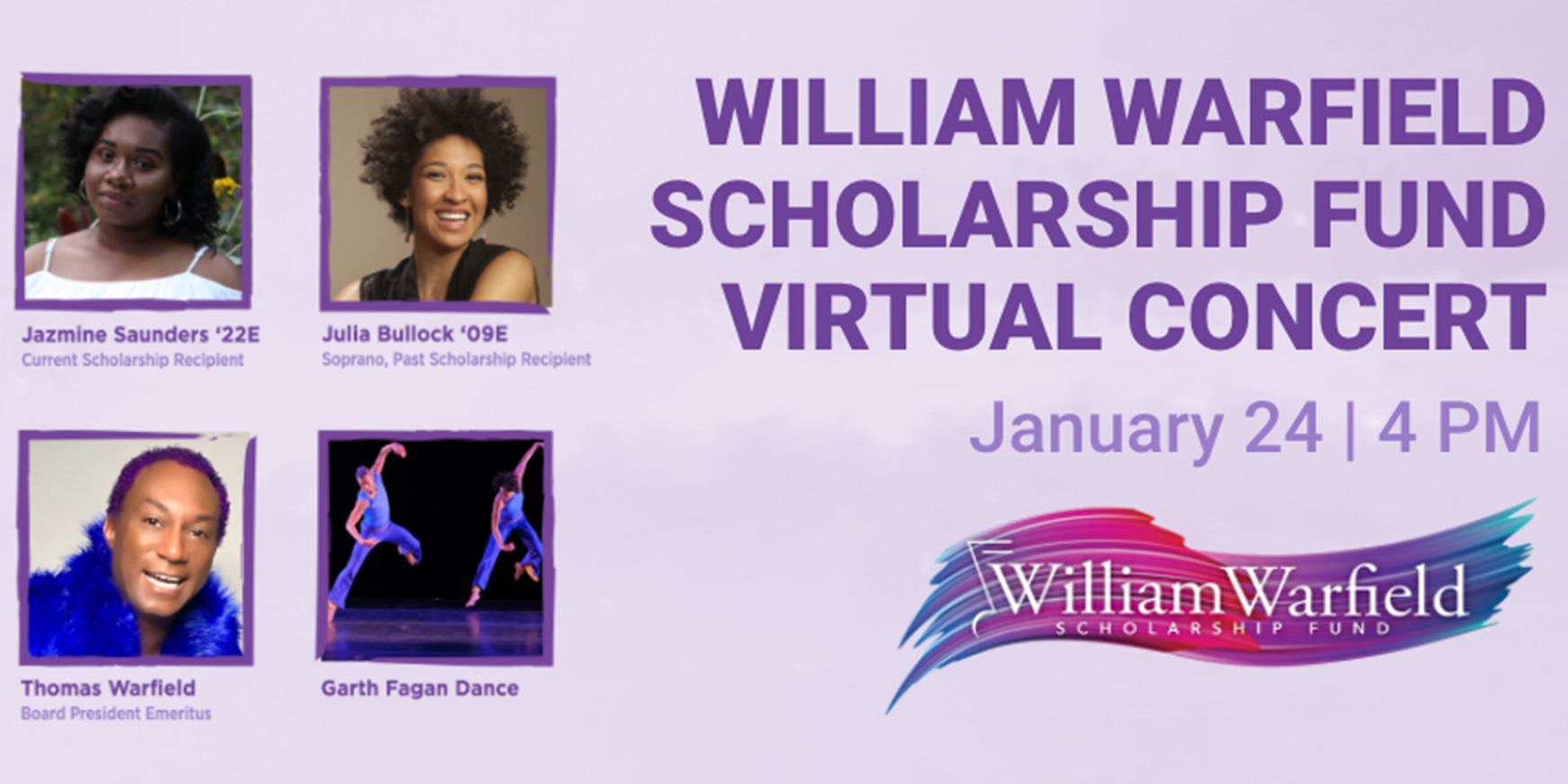 William Warfield Scholarship Fund, Lolita Forsett, President of the Board,

Since it was founded in 1977, the William Warfield Scholarship Fund, Inc. (WWSF) has provided financial aid to more than 35 African American students at the Eastman School of Music, and spotlighted talented recipients in an annual benefit concert. This year’s benefit concert will be virtual on Sunday, January 24, 2021, at 4 p.m. and features the 2020 scholarship recipient, Eastman student, Jazmine Saunders ‘22E, as well as Eastman alumna, former William Warfield Scholarship recipient, and one of Musical America’s 2021 “Artists of the Year” Julia Bullock ‘09E.

Over four decades, recipients of the William Warfield Scholarship have included such notable singers as Eastman alumna and current faculty member soprano Nicole Cabell, winner of the 2005 BBC Cardiff Singer of the World competition; singer and choirmaster Jason Alexander Holmes, Artistic Director of the Cincinnati Boychoir, and bass-baritone Jamal Moore, who was featured with the University of Rochester a cappella ensemble The Yellowjackets on the NBC competition The Sing-Off  in 2011 and is performing internationally with the a cappella group The Exchange.

“Not only does the William Warfield Scholarship Fund play a significant role in my ability to attend the Eastman School of Music,” says Saunders, “but it shows me that I am supported and invested in as a Black classical musician. I am beyond thankful to be connected to this amazing board.”

“By supporting our events, you are funding life-changing programs which provide vital monetary support, connections, encouragement, and performance experience necessary to further the development of our African American youth who desire a career in classical vocal music,” stated Lolita Forsett, President of the WWSF Board of Directors. “In addition, you help provide a platform for our young talented artists to shine, as they uplift our spirit through the beauty of music.”

Tickets are $10 minimum donation and can be purchased at:   https://www.esm.rochester.edu/theatre/events/william-warfield-scholarship-concert/

Please consider increasing your support for the WWSF by donating here:

Jazmine Saunders, soprano, studying vocal performance at the Eastman School of Music, is the 2020-2021 William Warfield Scholarship Fund recipient. Her career highlights include performance at the Young Artist Auditions, Rochester Philharmonic League; winner of the Tessa Martin Award for Female Vocalists; grant recipient of the Friends of Eastman Opera opportunity for the Italian language program, Si Parla Si Canta, in Arona, Italy; and singing the soprano solo in Bach’s Cantata 114 as a member of the Eastman Chorale. Most recently, Jazmine was understudy for the role of Tonina in Prima la Musica e Poi le Parole; and will be featured in Eastman Opera Theatre’s virtual performances of Our Voices and Postcard from Morocco.

One of Musical America’s 2021 “Artists of the Year,” American classical singer Julia Bullock is “a musician who delights in making her own rules” (New Yorker). Combining versatile artistry with a probing intellect and commanding stage presence, she has, in her early 30s, already headlined productions and concerts at preeminent arts institutions around the world. Also, an innovative curator in high demand, she holds notable positions including opera programming host of the new broadcast channel All Arts, founding core member of the American Modern Opera Company (AMOC), 2018-19 Artist-in-Residence at New York’s Metropolitan Museum of Art, 2019-20 Artist-in-Residence of the San Francisco Symphony, and 2020-22 Artist-in-Residence of London’s Guildhall School. Bullock previously made debuts at San Francisco Opera in the world premiere of Girls of the Golden West, Santa Fe Opera in Doctor Atomic, Festival d’Aix-en-Provence and Dutch National Opera in The Rake’s Progress, and the English National Opera, Spain’s Teatro Real, and Russia’s Bolshoi Theatre in the title role of The Indian Queen. In concert, she has collaborated with orchestras including the Berlin Philharmonic, London Symphony Orchestra, NHK Symphony, New York Philharmonic, Boston Symphony, San Francisco Symphony and Los Angeles Philharmonic, while her recital highlights include appearances at New York’s Carnegie Hall, Boston’s Celebrity Series, Washington’s Kennedy Center, the Mostly Mozart and Ojai Music festivals, and New York’s Metropolitan Museum of Art. Her growing discography features Grammy-nominated accounts of West Side Story and John Adams’ Doctor Atomic, which she recorded with the composer conducting the BBC Symphony Orchestra. Committed to integrating community activism with her musical life, Bullock is also a prominent voice for social consciousness and change. To read more, click here.

Judah Taylor, sophomore at Denzel Washington School of the Arts, in Mount Vernon, New York. placed first in the 2020 William Warfield Scholarship Fund Classical Vocal Competition for African American High School Students, with his amazing performance of “Caro, Mio Ben”. This rising artist has performed at the 2020 Mount Vernon Mayoral Inauguration; and he is a current member of the Greater Centennial AME Zion Men’s Chorus. Judah has received acting scholarships from American Academy of Dramatic Arts 2019 and AMDA 2018, 2020. In addition, Judah Taylor attends the Juilliard Pre-College with support from The Epstein Family Foundation Scholarship.

Thomas Warfield has performed, from stage to television to film, in more than 100 cities around the world as a singer, dancer, actor, model, composer, choreographer, director, producer, educator, activist, and poet.  For 22 years he has been director of dance and professor at NTID/RIT. He is artistic director of PeaceArt International, a community building through the arts global project he founded 30 years ago. He is a recipient of grants from the National Science Foundation and the National Endowment for the Arts, received the Off-Broadway Award for choreography, and was honored by the United Nations. His original project “A Global Poem in Praise of Peace” received dozens of participants, including Leonard Bernstein, Mother Theresa, and President Mitterrand of France. The original title song of his CD Celebrate the Moment is currently used for a campaign by the City of Rochester. He is former president of ARTWalk and the Association of Teaching Artists and has served on numerous boards including The Rochester Area Community Foundation, Rochester Fringe Festival, Gateways Music Festival, MuCCC Theatre, The National Classic TV Preservation Society, and is president emeritus and historian of the William Warfield Scholarship Fund.

Garth Fagan Dance is an internationally acclaimed dance company founded by Artistic Director Garth Fagan, and now celebrating its 50th year. The company’s mission is to sustain Mr. Fagan’s pioneering vision of contemporary dance through the creation and performance of his choreography, dance training for all regardless of race, gender or financial resources, and development of educational programs and performances to enrich communities. Company achievements include six Bessie award winners, collaborations with Multi-Grammy and Pulitzer award winner Wynton Marsalis, touring six continents, 27 countries, and over 400 cities, a PBS special, and development of the Fagan Technique to sustain and extend the dancing lives of his dancers. Garth Fagan Dance has been acclaimed as “unfailingly original” by The New York Times. Garth Fagan is internationally known for his Tony and Olivier Award-winning choreography of the Broadway musical The Lion King, which has been recognized as the highest-grossing stage show in history.

About the William Warfield Scholarship Fund

Formed in March 1977 (incorporated in 1979) under the leadership of Anastasia L. “Tessa” Martin to honor the life and legacy of William Warfield, we are a 15-member board, 100% volunteer operated with no paid personnel.

The William Warfield Scholarship Fund is dedicated to providing financial support and encouragement for African American students to attain success in the field of classical vocal music; and fostering wider recognition of the life and legacy of William Warfield.

What Are Future Goals for the WWSF?

As our financial and volunteer resources allow, we will develop educational programs that inform the public about the life and legacy of William Warfield; and continue to identify ways to support African American classical vocal students and their careers.

William Warfield was born in West Helena, Arkansas on January 22, 1920, the oldest of five sons of a Baptist minister and sharecropper. His parents, Robert and Bertha McCamery Warfield, were the children of African American slaves. In 1925 his father moved his family north to Rochester to seek better educational and employment opportunities.

William graduated from Rochester city schools and earned a New York state cosmetology license. During his senior high school year, he won the National Music Educators League Competition and a full scholarship to any American music school of his choice. William chose the Eastman School of Music, where he received his bachelor’s and master’s degrees in 1942 and 1946.

He described how he encountered virulent racism as he started working in his professional field, recounting painful memories of racial slurs, closed doors. and impossible barriers. Opportunities for an African American male opera singer remained too limited, but concert tours and popular music scenes presented him with ample professional fulfillment. “Opera wasn’t ready for me, or any black male …But it never occurred to me to give up.”

William was known worldwide for his work as a soloist, recitalist, actor, narrator, and activist. He was acclaimed throughout the world as one of the great vocal artists of our time, was a star in every field open to a singer’s art and was one of the world’s leading experts on Negro Spirituals and German Lieder. Best known for his portrayals of Porgy in Gershwin’s Porgy and Bess and of Joe, the dock hand, in the movie Show Boat, he won a Grammy in 1984 for his narration of Aaron Copland’s A Lincoln Portrait accompanied by the Eastman Philharmonic. In 1991, he published his uncommonly personal memoir, My Music & My Life.

Warfield died at age 82 on August 25, 2002, in Chicago from complications from a broken neck suffered in a fall. He is buried in Rochester’s Mt. Hope Cemetery. Many members of his family continue to live in Rochester.