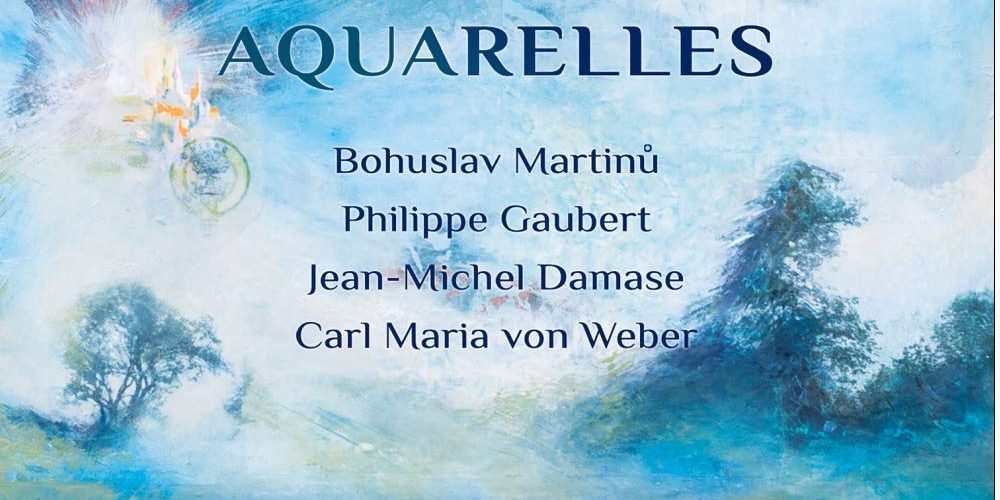 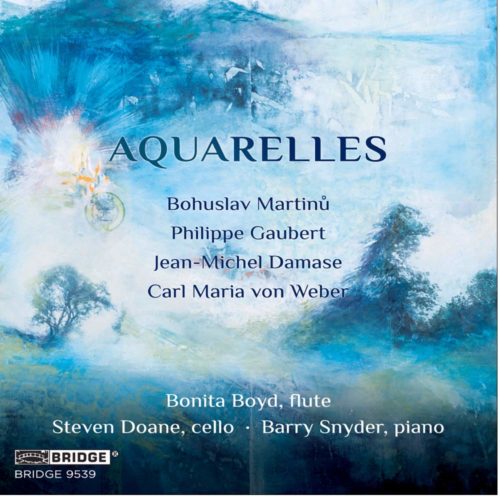 The program of Aquarelles consists of four works that are classics of the chamber repertory for flute, cello, and piano: trios from the 19th century by Carl Maria von Weber and the 20th century by Bohuslav Martinů; Sonate en concert by Jean-Michel Damase; and the work that gives the CD its title, Trois Aquarelles by Philippe Gaubert.

“I am so thrilled about the release of this new CD of major trios for flute, cello, and piano, with my world class colleagues Barry Snyder and Steven Doane,” says Bonita Boyd. “We have worked together over many years, and I consider them both to be among the greatest artists of their time, so this is indeed a joy for me! We invite you all to celebrate the release of Aquarelles with us online- a bright spot in this challenging time!”

Join this webinar event, registration required, including panel discussions and guest appearances from Rich Wattie, Thomas Moore, Marjorie Roth, Henrik Soderstrom, Becky and David Starobin. Boyd shares, “the collaborations from these wonderful artists, including musicologist, producer, engineer, and key players from the Starobins of Bridge Records, will round out this wonderful event.”

You can purchase the CD here: https://bridgerecords.com/products/9539

Bonita Boyd began her career at age 21 as principal flutist of the Rochester Philharmonic under Maestro David Zinman, becoming the youngest principal flutist of a major American orchestra at the time. She later resigned that position to devote herself to her growing solo career. Her Alice Tully Hall debut was praised by the New York Times as a “flabbergasting display of her talents.” Her extensive concert tours have taken her throughout the world. Her Flute Music of Les Six album was honored in Stereo Review’s Album of the Year Awards, and her Paganini Caprice CD was on the final ballot for a Grammy nomination. Boyd was appointed to the Eastman School of Music in 1977. She served as Principal Flutist of the Rochester Philharmonic, Chautauqua Symphony, Filarmonica de las Americas, and the Aspen Festival Orchestra. She has been president of the 5,000-member National Flute Association. She concertizes regularly with famed guitarist Nicholas Goluses. She has received the National Flute Association’s Lifetime Achievement Award, and the Eisenhart Award for Excellence in Teaching from Eastman. Her students occupy major orchestral and teaching posts throughout the world.

Steven Doane has earned an international reputation as soloist, recitalist, and chamber musician. An Eastman School of Music faculty member since 1981, he travels frequently to the United Kingdom for recitals, clinics, and master classes, and has been soloist with orchestras in London, Edinburgh, and Dublin. Recital appearances with pianist Barry Snyder have included concerts at New York’s Alice Tully Hall, Boston’s Sanders Theater, and London’s Wigmore Hall, and other appearances throughout the UK and the United States.

Barry Snyder is internationally acclaimed as a pianist and teacher. Winner of three major prizes at the 1966 Van Cliburn International Piano Competition – Silver Medal, Pan American Union Award, and the Chamber Music Prize – he has produced more than 55 CDs and given concerts spanning over four decades around the world. Snyder has performed with the Chilingirian and Cleveland Quartets, Hermann Prey, and Steven Doane, and the orchestras of Montreal, Baltimore, and Japan. Master classes have taken him to England, Germany, Poland, China, and Australia. Barry Snyder is Professor Emeritus of the Eastman School of Music and is currently an Adjunct Professor at New York University.

Doane and Snyder have a series of recordings on the Bridge label. Their disc of works by Benjamin Britten and Frank Bridge won a 1996 NAIRD Award from the American music press, with the Bridge Sonata declared “the best performance on record” by BBC Music Magazine. An earlier Bridge disc of the complete works for cello and piano by Fauré received a “Petit Diapason d’Or” from the French press, and their disc of music of Rachmaninoff was also released on Bridge.

Rochester native Julia Figueras is the music director and mid-day host for WXXI-FM 91.5/90.3. She is also the producer and host of Backstage Pass, WXXI’s award-winning live performance and interview show.  Julia began life in radio at WICN in Worcester, Massachusetts, and has worked in formats ranging from classical to rock to jazz—with a dash of talk—in Boston, Massachusetts as well as stations in New Hampshire. She received her bachelor’s degree in Theater Arts, cum laude, from Brandeis University. The mother of two daughters, both alumnae of the Rochester Philharmonic Youth Orchestra, Julia has a passion for the Boston Red Sox and New York Times crossword puzzles, loves music ranging from Springsteen to Sibelius, and enjoys reading mysteries and histories. She also appreciates great food, and is grateful her husband, Peter Iglinski, is an excellent cook. Currently, she sits on the Board of Directors for the William Warfield Scholarship Fund.