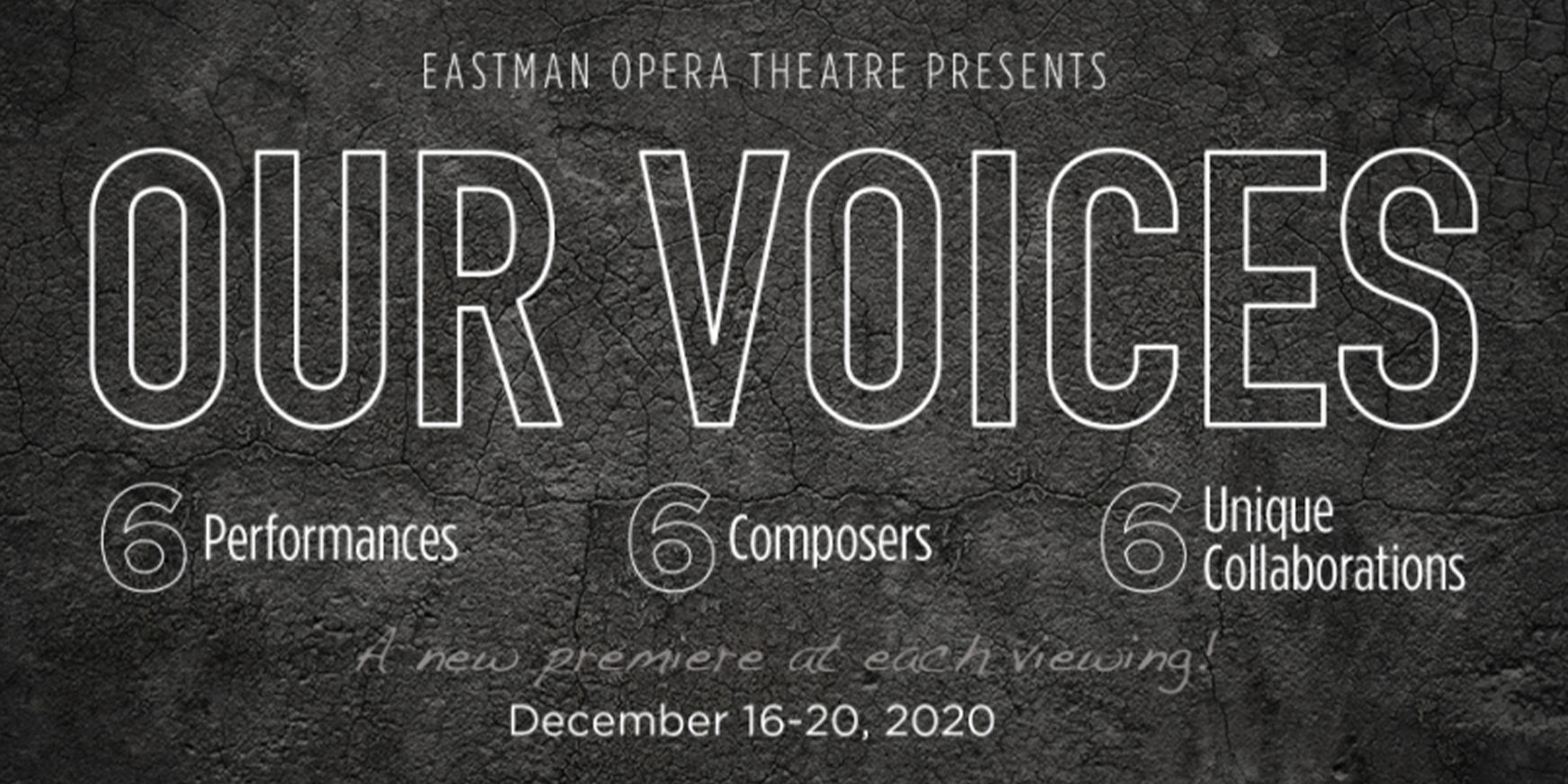 In the words of EOT music director Timothy Long, these six composers are “among the music industry’s most successful vocal music composers today.” Each of these renowned composers will curate a program of their vocal music, join in group discussions and individual coachings with students and faculty members, and guide the process up to the fall performances. (See below for composer biographies.)

Our Voices offers students something they rarely experience: a fully immersed creative, collaborative journey. “Adversity breeds creativity,” says Stephen Carr, Associate Artistic Director of Eastman Opera Theatre. “Our students will work one-on-one with some of the most prominent and prolific living composers of vocal music and take an active role in the scenic, costume, and lighting design of their own performances. We hope that they’ll emerge from this time as more fully fleshed artists, with a deeper understanding and greater appreciation of all that goes into this most collaborative of art forms.”

“Now is the time for artists to explore new ways to express themselves and Eastman has thoroughly taken on the challenge,” says composer Ben Moore.  “Paradoxically, restrictions can sometimes open new doors and spark the imagination.  That is undoubtedly the case for Eastman’s students and faculty.”

Presented in an “Opera Festival” style and in a fully virtual landscape, Our Voices will offer six premieres across five days. Besides music, each video features a 15-minute interview with the composer and director, providing insight into the composition and rehearsal process of the particular work being shown. Performance dates and times are as follows:

Each day’s presentation will be added to the previous days’ videos, so that all six will be available to watch after Sunday, December 20. The complete series of operas will be available for streaming in the months to follow.

“It has never been more essential to learn how to tell stories through music and to reflect our turbulent but hopeful times through art,” shares Missy Mazzoli. “I am confident that the next generation can do this in surprising, vital and moving ways, and I love that the Eastman Opera Theatre has given them this opportunity.”

Opera News has called Anthony Davis “a national treasure” for his pioneering, distinctly original work in opera, chamber, choral, and orchestral music. He won the 2020 Pulitzer Prize in Music for his opera The Central Park Five.

The New York Times describes the vocal music of Ricky Ian Gordon as “caviar for a world gorging on pizza!” and praised him for “bursting effervescence infusing songs that blithely blur the lines between art song and the high–end Broadway music of Leonard Bernstein and Stephen Sondheim.” Eastman Opera Theatre recently produced his opera The Tibetan Book of the Dead.

Described by Fanfare Magazine as “one of the most talented and intriguing living composers,” Lori Laitman‘s  operas, choral works, and songs are widely performed throughout the world. The Journal of Singing praised “her exceptional gifts for embracing a poetic text and giving it new and deeper life through music.”

Recently deemed “one of the more consistently inventive, surprising composers now working in New York” (New York Times) and “Brooklyn’s post-millennial Mozart” (Time Out NY), Missy Mazzoli has had her music performed by the Kronos Quartet, LA Opera, eighth blackbird, the BBC Symphony, Scottish Opera, and many others. In 2018 she became one of the first two women to receive a mainstage commission from the Metropolitan Opera and was also nominated for a Grammy award.

The work of Ben Moore has been called “brilliant” and “gorgeously lyrical” by the New York Times; Opera News has praised the “easy tunefulness” and “romantic sweep” of his songs, which have been performed by such singers as Deborah Voigt, Susan Graham, Frederica von Stade, Isabel Leonard, Lawrence Brownlee, Robert White, Nathan Gunn and Audra McDonald.

Errollyn Wallen – “renaissance woman of contemporary British music” (The Observer) – is as respected a singer-songwriter of pop-influenced songs as she is a composer of contemporary new music. Communication is at the center of both worlds: engaging the audience, speaking directly to hearts and minds.