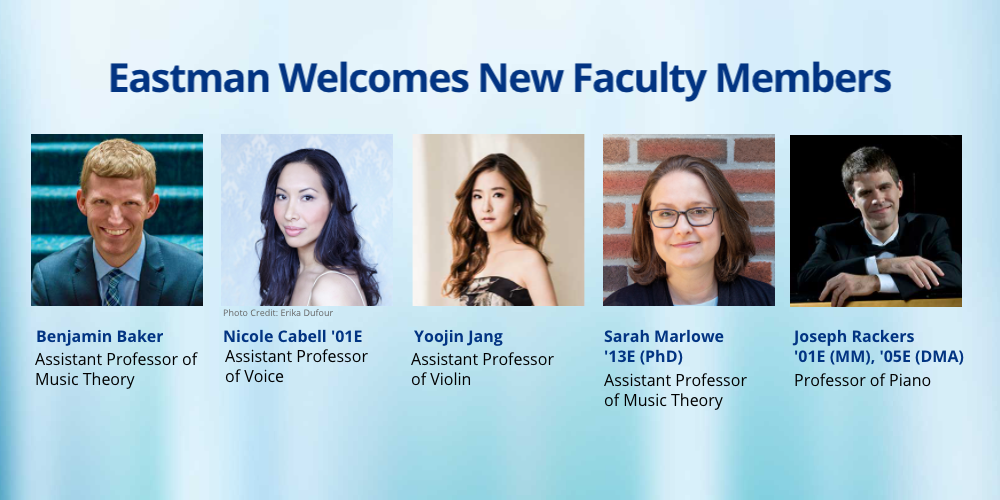 Eastman School of Music is proud to announce several new full-time and visiting faculty appointments for the 2020-2021 academic year:

“It is thrilling to welcome these remarkable artists and scholars to the Eastman faculty,” says Jamal Rossi, the Joan and Martin Messinger Dean at Eastman. “Each of them has a proven passion and commitment to teaching excellence, which is a hallmark of the Eastman experience.  I am excited by the prospect of the contributions they will be making to our school in the years ahead.”

Korean violinist YooJin Jang has been appointed Assistant Professor of Violin. Jang is a winner of the 2017 Concert Artists Guild Competition and First Prize winner of the 2016 Sendai International Music Competition in Japan, and also a co-founder of The Kallaci String Quartet, which made its international debut at the Seoul Spring Festival of Chamber Music. Recognized for her creative work in chamber music, she won the 2011 Borromeo String Quartet Guest Artist Award, and in 2009 the Schloss Weikersheim Scholarship of the London String Quartet Competition

“I am so excited and humbled to be joining the faculty at Eastman School of Music,” Jang says. “It’s an honor to be collaborating alongside the esteemed faculty and I look forward to working with the students and help them discover their own voice both musically and personally.”

Phillip Ying, Co-Chair of the Strings, Harp and Guitar Department, adds, “Yoojin brings to the Eastman School a fresh voice and a stellar combination of instrumental brilliance, dynamic artistry, and a passion for teaching. She will be an inspiring presence and a fantastic colleague in the Eastman community.”

Benjamin Baker is a University of Rochester Sproull Fellow in music theory, with a B.A. in music and mathematics from St. Olaf College and a M.M. in jazz piano performance from New York University. His research focuses on intersections between jazz and popular music, intertextuality and improvisation in jazz performance, and analysis of music by jazz pianist Robert Glasper.

“I’m elated and humbled to be joining the Theory faculty,” says Ben Baker. “Teaching at Eastman affords a rare and tremendous opportunity to work with talented students and brilliant colleagues, all within a community marked by exceptional warmth and collegiality. I am blessed indeed, and I look forward to a wonderful first semester this fall.”

Sarah Marlowe comes to Eastman from New York University, where she was an Assistant Professor and received the NYU Steinhardt Teaching Excellence Award. She holds degrees in piano performance and music theory from the University of Massachusetts Amherst, and in music theory from Eastman. Sarah’s research centers on fugue and counterpoint, Russian music theory, the music of J. S. Bach and Dmitri Shostakovich, and music theory and aural skills pedagogy.

“It is a true honor to join the Eastman theory faculty,” says Sarah Marlowe. “I am continually inspired by the outstanding scholarship and musicianship of Eastman’s faculty and students, and I am thrilled to return to this wonderful and nurturing community of scholars and performers.”

While studying at Eastman, Ben and Sarah each received the Teaching Assistant Prize, and the University’s Edward Peck Curtis Award for Excellence in Teaching by a Graduate Student.

Joseph Rackers, who was a Visiting Professor of Piano at Eastman last year, has been promoted to full-time Professor of Piano. Hailed as an “American Virtuoso” (Audiophile Audition) and for his “enormous power and intelligent, instinctive interpretation” (Spoleto Today), Rackers has performed for enthusiastic audiences throughout the United States, Europe, and Asia. An International Steinway Artist, he serves on the artist faculty of the Perugia, Burgos, and Texas State International Piano Festivals and the Southeastern Piano Festival and has performed widely with the Lomazov/Rackers Piano Duo. He has given master classes at several American universities, and at conservatories and music festivals across the United States, Europe, and Asia, and his students have won national and international competitions.

“Joseph is an incredible performing artist in solo, concerto, and chamber music settings, as well as being a wonderful teacher, and he will be a great addition to our Piano faculty,” shares Doug Humpherys, Chair of the Piano department. This is also the first time we’ve had a duo-piano team in residence on the faculty, with Joseph together with Professor Marina Lomazov.”

Violinist Itamar Zorman is the winner of the 2013 Avery Fisher Career Grant, and the 2011 International Tchaikovsky Competition. Mr. Zorman studied at the Jerusalem Academy, The Juilliard School, Manhattan School of Music, and the Kronberg Academy, working with Sylvia Rosenberg and Christian Tetzlaff. He has performed as a soloist with the Mariinsky Orchestra, Israel Philharmonic, New World Symphony, Saint Paul Chamber Orchestra, KBS Symphony Seoul, Frankfurt Radio Symphony, and American Symphony, and with conductors Valery Gergiev, Zubin Mehta, James DePreist, and Michael Tilson Thomas. As a recitalist, he has performed at Carnegie Hall’s Distinctive Debut series, People’s Symphony Concerts, the Louvre Museum, Suntory Hall and Frankfurt Radio. He is a member of the Israeli Chamber project, and a member of the Lysander Piano Trio, which won the 2012 Concert Artists Guild Competition.

Regarding the return of Itamar Zorman to Eastman, Dean Rossi says, “Itamar Zorman is an artist with an authentic voice who expresses himself through the perfect combination of extraordinary intelligence coupled with deep emotion. We are thrilled to have him as a member of our community as a visiting guest artist.”