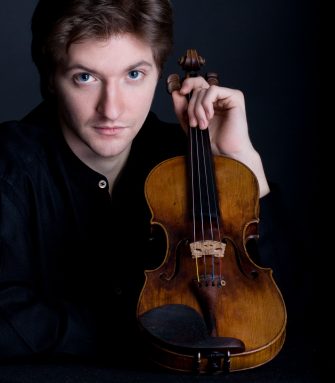 The Faculty Artist Series presents Robin Scott, Associate Professor of String Chamber Music, on Sunday, February 16th at 3 p.m. in Kilbourn Hall at the Eastman School of Music. Professor Scott, along with pianist Hannah Shields, will perform music of Beethoven, Bartók, and Grieg.

Scott has appeared as a soloist with the Minnesota Orchestra, St. Paul Chamber Orchestra, Indianapolis Symphony, Fort Wayne Philharmonic, Montgomery Symphony, Orchestre National de Lille in France, and many others. He has given numerous recitals and performances throughout the United States and abroad, in such venues as Carnegie’s Weill Recital Hall and the Schubert Club in St. Paul, Minnesota.

Scott is also the newest member of Eastman’s string quartet-in-residence, the Ying Quartet, as the Grammy-winning ensemble’s first violinist. As an avid and passionate chamber musician, Scott has performed at the Kennedy Center, the Library of Congress, the Smithsonian Institution, Boston’s Jordan Hall, the Morgan Library, Town Hall in New York City, and other venues. His festival appearances include the Marlboro Music Festival, Ravinia’s Steans Institute for Young Artists, Yellow Barn, Kneisel Hall, and the Saratoga and Chesapeake Chamber Music Festivals, MusicIC in Iowa City, and others. He has participated in the acclaimed Music From Marlboro tours, as well as tours under the auspices of the Ravinia Festival, and was a member of the Gesualdo String Quartet, the quartet-in-residence at the University of Notre Dame.

Scott is also an accomplished and in-demand orchestral leader and has served as concertmaster of the New York Classical Players. He was guest concertmaster with the Fort Wayne Philharmonic and has performed with the St. Paul Chamber Orchestra as guest principal second violin.

A native of Indiana, Scott received his Bachelor of Music Degree at the New England Conservatory and his Artist Diploma at Indiana University. He pursued additional studies at NEC with Donald Weilerstein, the founding first violinist of the Cleveland Quartet, and violist Kim Kashkashian.

Pianist Hannah Shields has performed widely throughout the United States, both as a soloist and a chamber musician. She has appeared as a soloist in the Bach concerto for four keyboards at Carnegie Hall under the baton of Itzhak Perlman, and she has played chamber music in concert series across the country and abroad. Notable appearances include Alice Tully Hall, Carnegie’s Weill Hall and Zankel Hall, the Kumho Center in Korea, the Seattle Opera House, Boston’s Jordan Hall, the Metropolitan Museum, and the Royal Academy of music in London.

She holds a bachelor’s degree from the Cleveland Institute of Music, where she was a student of Daniel Shapiro, and a master’s degree from Yale School of Music, where she studied with Claude Frank. She completed her piano studies at the New England Conservatory of Music, with Vivian Hornik Weilerstein. Ms. Shields is a prizewinner of the Kosciuszko Chopin Competition, Fite Family Young Artist Competition, and Young Keyboard Artists International Competition, and has attended numerous music festivals, including the Yellow Barn Music Festival, the Banff Chamber Music Festival, Perlman Music Program, and the Taos School of Music.

Ms. Shields has been a faculty member at the Kinhaven and Summertrios summer programs. An advocate of contemporary music, Ms. Shields has released several recordings for Parma Recordings and Navona Records, including premier recordings of works by John Bilotta, Paul Epstein, Quinn Dizon, Howard Quilling and Alan Beeler. She is the cofounder and organizer of two chamber music series, “Musique a la Mode” in New York and “Neighborhood Concerts” in Boston, both of which feature innovative programming for mixed ensembles.

Ms. Shields has performed in chamber music groups with Itzhak Perlman, Pinchas Zukerman, Barbara Stein Mallow, Andre Emelianoff, and Kyung-Wha Kim, and has played sonata recitals with Kyu-Young Kim, Beth Guterman Cho, Yura Lee, Christine Lamprea, Kristin Lee, and Robin Scott. She currently has a piano studio in the Boston area, where she teaches students ranging in age from 4 to 65. In her free time, she enjoys photography, silversmithing, and cooking South Indian food.