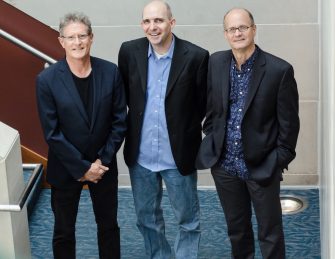 The Faculty Artist Series presents Charles Pillow, Assistant Professor of Jazz Saxophone, along with Rich Thompson and Jeff Campbell, Professors of Jazz Studies and Contemporary Media, on Monday, February 10th at 7:30 p.m. in Hatch Recital Hall at the Eastman School of Music. The concert will feature the music of Brazilian composer Hermeto Pascoal.

A fluent performer, educator, and touring musician, Charles Pillow has appeared on over 100 CDs of jazz and pop artists such as Brad Mehldau, John Scofield, Michael Brecker, David Liebman, David Sanborn, Jay Z, Paul Simon, Tom Harrell, Joe Henderson, Maria Schneider, and Bob Mintzer. In addition to his teaching at the Eastman school of music, he gives masterclasses throughout the United States and abroad.

With 7 recordings to his credit, Pillow has established himself as one of the premier woodwind instrumentalists and saxophonists of the day. His recordings include Electric Miles (2018 on MAMA Records) with his large ensemble, featuring the music of Miles Davis, which was a top 10 critics pick; Triocity (2017 on Originarts) with fellow Eastman instructors Jeff Campbell and Rich Thompson; Van Gogh Letters (2010 on ELCM Records) featuring Eastman instructor Gary Versace; The Planets and Pictures at an Exhibition, both on Artistshare; In this World (2001 on Summit Records); and Currents (1996 on Challenge Records).

Drummer Rich Thompson has been in demand as a top call drummer in Rochester for the past 25 years. Besides serving as the drum set instructor at the Eastman School of Music since the fall of 1996, Rich has toured, performed, and recorded with the “who’s who” of jazz greats including pianist James Williams (Art Blakey and the Jazz Messengers), The Count Basie Orchestra, Tito Puente, Frank Foster, The Byron Stripling quartet, saxophonist Rich Perry, the Bill Dobbins Trio, Harold Danko, Marion McPartland, Trio East (which includes Clay Jenkins and Jeff Campbell), trumpeter Snooky Young, guitarist Gene Bertoncini, Carl Fontana, Phil Woods, Joe Pass, and a host of others too numerous to mention. The Boston Globe cited Rich as “the drummer who drove the Basie sound” when he appeared with them at the Boston Jazz and Blues Festival.

Rich has been touring this country and abroad with the Byron Stripling Quartet for the past five years. His CD Trio Generations was released in May of 2012 on Origin Records. It was included on the long list for two Grammys. His Less is More was recorded with trumpet sensation Terell Stafford, pianist Gary Versace, and bassist Jeff Campbell and was released in March of 2013 on Origin. In 2016 Rich recorded Have Trumpet Will Swing with the Bryon Stripling Quartet, and in 2017 I Believe in You by Triocity, featuring multi- saxophonist/reedman Charles Pillow and bassist Jeff Campbell.

Rich performs regularly with numerous symphony orchestras in the United States and Canada, the world renowned “Jazz Cruise” and clubs throughout the U.S. and Europe with the Byron Stripling quartet.   His clinics and performances have taken him as far as France, Thailand, Japan, Switzerland, and Newfoundland. Rich has written four drum set books published by Kendor Music USA and Advance/Schott Music-Germany. Visit Rich on his website to listen to clips or watch a video of his trio at the Rochester International Jazz Festival.

Jeff Campbell has carved out an impressive career as bass player of extraordinary artistry, fluent in both the jazz and classical idioms. As a jazz bassist, he maintains an active schedule performing with Marian McPartland, Gene Bertoncini, Rich Perry, Trio East, Harold Jones, and the Eastman Jazz Quartet featuring Harold Danko, and has appeared on McPartland’s Piano Jazz program on National Public Radio. In high demand across the globe, Jeff has performed at such prestigious European musical events as the Nice, Montreux, North Sea, Riga, and Parnu Jazz Festivals and has also appeared in the former Soviet Union and the Baltic Republics. His first CD, West End Avenue, with John Hollenbeck and John Wojceichowski, features a combination of original compositions and jazz standards. Additionally, Jeff is a member of the Rochester Philharmonic Orchestra bass section. His summers are occupied with the Birch Creek Music Performance Center in Door County, Wisconsin, where he serves as program director, and the Eastman Summer Jazz Studies and Bass Day, of which he is co-director.

In addition to a busy performing schedule, Jeff maintains an active career as a jazz educator with a keen interest in bass playing of the past, present, and future. A full-time professor at Eastman since 1997, his teaching duties include jazz bass, jazz history, jazz theory and aural skills, and small group performance. He is a regular contributor to Double Bassist magazine, and is the Jazz Editor of Bass World, the official publication of the International Society of Bassists. Jeff’s book on the famous Duke Ellington-Jimmy Blanton duets (in preparation for publication) provides bassists with an opportunity to study the bass playing of the great Jimmy Blanton.

Jeff’s music education began at an early age under the influence of his professional-musician parents. As a young musician, Jeff received much of his musical training working with local professional musicians in a myriad of musical styles and venues. Through these experiences, Jeff developed a healthy balance between the artistic and practical issues faced by today’s professional musician. Jeff holds degrees in double bass performance and music education from Brigham Young University (BM) and the Eastman School of Music (MM, DMA). He has studied bass with John F. Clark, James VanDemark, Jeffrey Turner, and Robert Zimmerman, and jazz composition with Bill Dobbins and Fred Sturm.

“I Believe In You”, a CD created by this trio, otherwise known as Triocity, will be available for purchase at this concert. Details about this CD are included here: http://originarts.com/recordings/recording.php?TitleID=82739