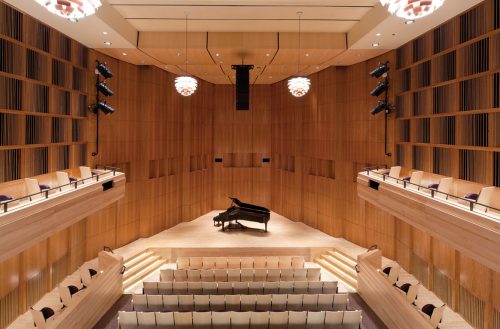 Flutist Bonita Boyd has been a Fulbright Grant recipient, and has been President of the National Flute Association, a 5000-member international organization of flutists from around the world.  She has been an artist-faculty member of the Eastman School of Music since her appointment in1976. Her recording, Flute Music of Les Six, was honored by Stereo Review in its Record of the Year Awards, and her Paganini Caprices CD was on the final ballot for a Grammy nomination.

Bonita has made radio recordings with the Bavarian Rundfunk, Oslo, West Berlin, Hamburg, Amsterdam, Hague, Brussels, Australian Broadcasting, and Canadian Broadcasting networks.  Among her television specials have been two PBS Television Specials as soloist, Tokyo recital debut televised on Japanese Cable Television, Santa Domingo Symphony soloist debut on Latin American National Television, and a solo debut with the Polish Radio Orchestra on live Polish National Television. Ms. Boyd has recently been named a Lifetime Achievement Award winner by the National Flute Association, joining the ranks of such legendary flutists as James Galway and Julius Baker. Bonita has also been awarded the Eisenhart Award for Excellence in Teaching by the Eastman School of Music, and her students occupy major orchestral and teaching posts throughout the world.

A Buffalo native, Kenneth Grant joined the Rochester Philharmonic Orchestra in 1987 as principal clarinet after almost 15 years in the same position with the Columbus Symphony. Solo appearances with the RPO include works by Mozart, Weber, Copland, and Debussy. In 1994, he premiered Sydney Hodkinson’s Concerto for Clarinet with the Rochester Philharmonic under the direction of David Effron. Other premieres with the RPO include Sonata for Clarinet and Piano and the Fantasy Etudes, composed by Verne Reynolds, former professor of horn at the Eastman School of Music. Grant also has appeared as soloist with the Finger Lakes Symphony, the Penfield Symphony, the Geneseo Symphony, and the University of Rochester Symphony Orchestra. He also has performed as part of the Rochester Society for Chamber Music since 1989. In 1990, Grant toured Europe with The Cleveland Orchestra as assistant principal clarinet and participated in that orchestra’s recording of Bruckner’s Seventh Symphony. In 1994, he won critical acclaim in Japan as soloist with the Eastman Wind Ensemble on the Mozart Clarinet Concerto and has returned to Japan on several occasions to provide lessons and master classes.

In addition to performing, Grant is associate professor of clarinet at the Eastman School of Music since 1988 and also has taught at Barker (N.Y.) Central Schools, Capital University (Ohio), Tidewater Music Festival (Md.), Otterbein College (Ohio), and Ohio Wesleyan University. In the summers, Grant teaches at the Aria International Festival at Mt. Holyoke College (Mass.), and teaches and performs at the Marrowstone Festival at Western Washington University. He also was part of the Festival at Roundtop in Texas for the past 11 summers. Grant received his education at the Eastman School of Music. His principal teachers were Donald Mattea, James Pyne, and D. Stanley Hasty. He pursued additional studies with Frank Cohen and Theodore Johnson of The Cleveland Orchestra.

Nicholas Goluses’s concert tours as soloist, with orchestra, and as chamber musician have taken him across the world to critical acclaim, including New York recitals in Merkin Hall, Weill Hall at Carnegie Hall, Alice Tully Hall, and the 92nd Street Y; to major festivals throughout the world; and as a concerto soloist with many American orchestras.  He enjoys an active duo with flutist Bonita Boyd, and has collaborated with the American and Ying Quartets, violinists Zvi Zeitlin and Juliana Athayde, and tenor Robert Swensen.  He recently gave a 23-city concert tour of China, as well as concerts in Belgium, Ireland, and throughout the United States.

Nicholas Goluses is Professor of Guitar at Eastman, Co-Chair of the Strings, Harp, and Guitar Department, and recipient of the Eisenhart Award for Excellence in Teaching.  He held the Andrés Segovia Faculty Chair at Manhattan School of Music, where he received the Doctor of Musical Arts degree, and received the Pablo Casals Award and the Faculty Award of Distinguished Merit.  Professor Goluses is in great demand for master classes at leading institutions. His students have won major awards and competitions and hold numerous professorships throughout the world.

Goluses’ many recordings include sonatas of J.S. Bach (“Masterly control of form and substance,” Cleveland Plain Dealer) and late guitar works of Fernando Sor (“His performance compels the highest praise,” Classical Guitar). For Albany Records, he has recorded Chronicles of Discovery and Quicksilver with flutist Bonita Boyd, and Night Strings with violist George Taylor.  Of his recent solo CD, From Afar, American Record Guide wrote, “Goluses is masterly … a musician’s musician.”  He is prominently featured on a 2018 Linn Records CD set of the music of Samuel Adler.

Goluses has given over 100 world premières of solo pieces, concertos, and chamber music by leading composers.  His performance editions are published by Alfred Masterworks. He is a member of the National Academy of Recording Arts and Sciences, has served on the Board of Directors for the Guitar Foundation of America, and was named Musician of the Year by Mu Phi Epsilon.  He is the recipient of the 2019 Manhattan School of Music Distinguished Alumni Award, and was recently named to the Fulbright International Specialist Award roster. For more information on Nicholas Goluses please visit www.goluses.com.

Renée Jolles, violinist, enjoys an eclectic career as soloist and chamber artist specializing in a wide variety of styles from the Baroque to the contemporary. Hailed as a “real star” by The New York Times for her New York Concerto debut in Alice Tully Hall, she has premiered hundreds of works, including the American premiere of Schnittke’s Violin Concerto No. 2. Her concerto engagements have included orchestras such as Orpheus Chamber Orchestra, The Philharmonic Orchestra of New Jersey, The Cape May Festival Orchestra, and The Salisbury Symphony. Jolles is a member of the Jolles Duo (harp and violin), Continuum, Intimate Voices, The New York Chamber Ensemble, and is a concertmaster of the world-renowned, Grammy Award winning, conductorless Orpheus Chamber Orchestra. Honored to be a featured soloist in three world premieres as part of the Orpheus “New Brandenburg” commissions, she can be heard as soloist on the WQXR website in live performances from Carnegie Hall performing the music of Paul Moravec, Melinda Wagner, and Peter Maxwell Davies. Jolles received her BM and MM degrees from Juilliard, where, upon graduation, she was presented with the school’s highest award, the William Schuman Prize. Before accepting the position of Associate Professor of Violin at Eastman, Jolles was on the faculty of The Juilliard School, Pre-College Division, The Mannes School of Music, Preparatory Division, Hoff-Barthelson Music School, and The Aaron Copland School of Music at Queens College.

English pianist Andrew Harley enjoys an internationally recognized performing and teaching career. Specializing in instrumental chamber music and song literature, he has been heard in live radio and television broadcasts, on numerous recordings, as well as at venues such as Carnegie Hall, Wigmore Hall, Purcell Room, Kennedy Center, Library of Congress, and the Supreme Court of the United States. Dr. Harley began his early musical education at the renowned Chetham’s School of Music, continuing his studies at Oxford University, the Royal Northern College of Music, and the University of Southern California. Since immigrating to the United States, Dr. Harley has held faculty positions at The Juilliard School, the University of Southern California, and the University of North Carolina, before coming to the Eastman School of Music in 2019. As a guest artist, he has taught and given master classes at The New England Conservatory, Indiana University Bloomington, the Royal Northern College of Music, Chapman University, and the Folkwang University of the Arts in Essen, Germany, where he served as Visiting Guest Faculty in Accompanying.