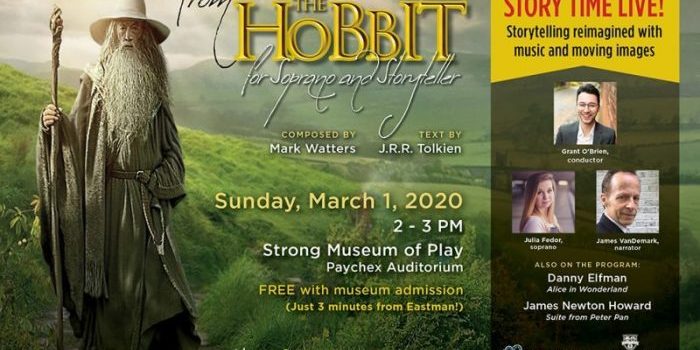 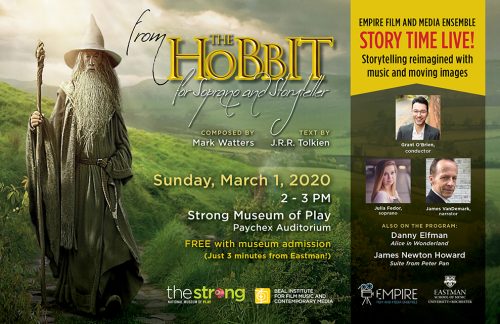 Gather ‘round to hear some tales of magic and explore distant lands of creatures that you’ve never seen before. Come enjoy some plots that only authors can contrive, as we play scores to pictures and deliver a Story Time LIVE. Featuring Empire Film and Media Ensemble (EFaME), Story Time LIVE will take place Sunday, March 1, 2020 at 2 p.m. at the Strong Museum of Play, in the newly renovated Paychex Theatre, here in Rochester.

In EFaME’s newest production, Story Time LIVE, a live orchestra will perform musical settings of three classic children’s novels, Alice in Wonderland, Peter Pan, and The Hobbit. In each work, a live narrator will tell a short story in which our heroes and heroines will traverse obstacles that only the bravest can overcome. Projection, lights, and a full orchestra will immerse you into these tales and give life to these magnificent stories.

This performance was made possible by contributions from Eastman’s Beal Institute.

Empire Film and Media Ensemble is an artistic collective that is dedicated to the production and performance of music and live to picture media. The Ensemble has performed as a part of The Little Theater’s One Take Film Festival and partnered with institutions like WXXI Classical 91.5, The Little Cafe, Eastman’s Beal Institute of Film Music and Contemporary Media, and the Strong Museum of Play. Empire is a registered 501(c)(3) nonprofit organization.

This performance is open to the public. Those who do not subscribe as members of the museum must purchase a general admission ticket for entry.