An Evening of Debussy Premieres 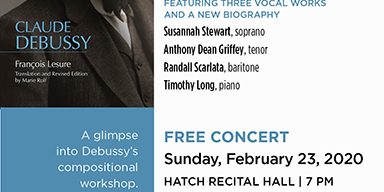 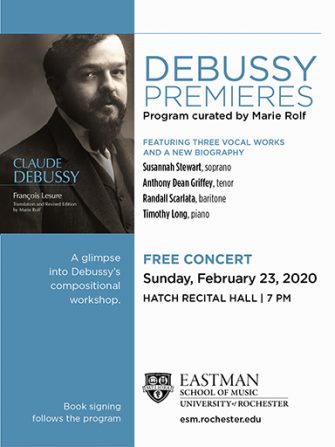 An evening of Debussy premieres, curated by Eastman School of Music’s Senior Associate Dean of Graduate Studies and Professor of Music Theory, Marie Rolf, will have a special preview at Eastman on Sunday, February 23, at 7:00 p.m. in Hatch Recital Hall.  Featured performers at this event include soprano Susannah Stewart, a current graduate student at Eastman, as well as three Eastman alumni; tenor Anthony Dean Griffey (MM01), Professor of Voice at Eastman; baritone Randall Scarlata (BM92), Associate Professor of Voice at the Peabody Institute; and pianist Timothy Long (MM92), Associate Professor of Opera at Eastman and Music Director of Eastman Opera Theatre.

This preview is a special concert for the Eastman and Rochester community, in advance of the “Eastman at the Morgan” event on Thursday, March 12, at 7:00 p.m. in New York City, hosted by The Morgan Library & Museum. Rochester’s preview is free and open to the public.

Giving context to these premieres, Marie Rolf shares, “We are thrilled to celebrate four landmarks in Debussy studies, prompted by the appearance in 2018 of two long-lost Debussy manuscripts and by the publication in summer 2019 of my English translation and revised edition of François Lesure’s seminal Claude Debussy: A Critical Biography.”  Drawing from this new book, Rolf will weave a narrative for the audience in between performances of the three vocal works, providing historical context and information on the libretti as well as situating these works within Debussy’s personal life.  Following the concert, copies of the biography will be available for purchase, and Rolf will be on hand to sign books.

She continues, “Daniel (world premiere) and Hymnis (North American premiere) are two dramatic works written by twenty-year-old Achille Debussy, whose compositional voice was already emerging.  His Spanish-inflected ‘Séguildille’ (New York City premiere), the longest and most virtuosic song he would ever attempt, was so difficult that it remained stashed away in his portfolio.  It was only in 2014 that this work was brought to light, in my edition for Durand, Debussy’s own publisher.”

Rolf adds, “My translation and revised edition of François Lesure’s important biography of Debussy, published by the University of Rochester Press, now allows music lovers worldwide to profit from new discoveries and insights into the life and work of one of France’s greatest composers. We look forward to giving audiences in Rochester and in New York a glimpse into Debussy’s early compositional workshop!”

Marie Rolf is Senior Associate Dean of Graduate Studies and Professor of Music Theory at the Eastman School of Music. As an administrator, she has led the faculty in creating numerous new degree and certificate programs, and she works with them to award all graduate-student scholarships. She also supervises faculty searches at Eastman and has oversight of the Sibley Music Library, North America’s largest collegiate music collection. Rolf has been teaching at Eastman for over forty years, and she has performed as a collaborative pianist with artists such as Marcia Baldwin, Jan DeGaetani, Robert Spillman, Charles Castleman, Millard Taylor, and Francis Tursi.

Rolf is best known for her scholarship on French composer Claude Debussy, but her research interests range from analysis and performance, keyboard skills, and the music and manuscripts of Debussy and Mozart, to the pedagogy of music theory. Her articles and reviews appear in the Cahiers Debussy, Intégral, the Mozart Jahrbuch, Music Theory Spectrum, The Musical Quarterly, Nineteenth-Century Music, and MLA Notes, among other journals, and she has authored chapters in books such as Debussy’s Resonance, Regards sur Debussy, Rethinking Debussy, Berlioz and Debussy: Sources, Contexts and Legacies, Debussy and His World, Debussy Studies, and Haydn Studies. Rolf is the only American member of the editorial board for the critical edition of Claude Debussy’s works, the Œuvres complètes de Claude Debussy, published by Durand in Paris. She is the editor of Debussy’s orchestral masterpiece La Mer as well as a volume of early songs (composed ca. 1882–87). In addition to bringing to light “Séguidille” in 2014, she authenticated another early song by Claude Debussy entitled “Les Papillons,” publishing a monograph, facsimile, and transcription of it with the New York Public Library in 2004. She is also the editor-arranger of Mozart’s Rondo for Horn in E-flat, KV 371, published by Bärenreiter, which is the first edition of the work that incorporates the sixty new bars of music brought to light in 1991 by Rolf.