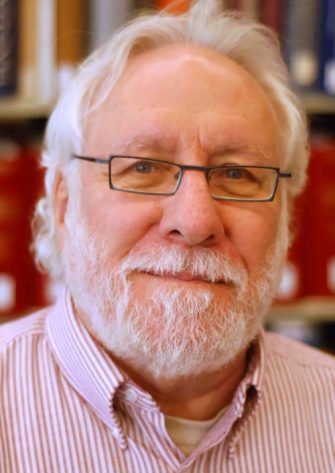 The Faculty Artist Series presents composer Robert Morris, Professor of Composition, on Sunday, January 26th at 7:30 p.m. in Kilbourn Hall at the Eastman School of Music. The program will include several of Morris’ compositions, including Primitive Roots 1 and 2; Septet; Strange Flowers; Occasional Storms; and Noted Harmonies. The concert will feature saxophonist Douglas O’Connor, pianists Daniel Campolieta and Zuzanna A. S. Kwon, and clarinetist Andrew Brown.

Robert Morris is Professor of Composition and affiliate member of the theory and musicology departments at the Eastman School of Music, where he was formerly chair of the composition department. He is a recipient of grants from the National Endowment for the Arts, the Hanson Institute for American Music, the American Music Center and the American Council of Learned Societies. His music has been performed in North America, Europe, Australia, China, Taiwan, and Japan.

Morris has composed over 140 works for a wide variety of musical forms and media, including computer and improvisational music. Some of his output from the 1970’s is influenced by non-Western music and uses structural principles from Arabic, Indian, Indonesian, Japanese, and early Western music. While such influences are less noticeable in more recent works, the temporal and ornamental qualities of Eastern music have permanently affected Morris’ style.

In addition to his music, Morris has written many articles and reviews that have appeared in scholarly music journals contributing to theories of musical analysis and aesthetics, compositional design, electronic and computer music, and Indian music. He is also co-editor of Perspectives of New Music.

Praised for his “seamless technique” and “sumptuous lyricism” (Philadelphia Inquirer), saxophonist Doug O’Connor has performed across Asia, Europe, and the United States, including appearances at the Kennedy Center for the Performing Arts, Merkin Hall, Carnegie Hall, and Philadelphia’s Kimmel Center for the Performing Arts. He holds DMA and MM degrees from the Eastman School of Music, and a BM in Saxophone Performance from the University of Maryland. O’Connor recently served as Adjunct Assistant Professor of Saxophone at Eastman, as Associate Lecturer of Saxophone at the University of Wisconsin in Eau Claire, as saxophonist with the United States Naval Academy Band, and is currently employed as ceremonial saxophonist with the United States Army Band, “Pershing’s Own.”

With a passion for chamber music, Dr. O’Connor was a founding member of the Red Line Saxophone Quartet. While playing soprano saxophone in Red Line, the group won grand prizes at the Chesapeake, Coleman, NASA, and MTNA chamber music competitions, as well as gold medals at the Fischoff and Plowman chamber competitions. Red Line premiered five new works for sax quartet and electronics on MATA’s Interval Series in NYC and released a CD on iTunes, Back Burner. As a jazz artist, Dr. O’Connor freelances throughout the Baltimore-Washington metropolitan area, and recently toured with the Airmen of Note at the Lionel Hampton and Missouri State Jazz festivals on baritone saxophone and bass clarinet.

Dan Campolieta is a pianist, organist, and composer in Washington, D.C. Dan’s musical interests range from historically informed early music to the most avant-garde, and everything in between. Having trained as a classical organist and a jazz pianist, his style of composition often fuses elements of both genres. Dan has worked with composers Morten Lauridsen, Chen Yi, Kenneth Fuchs, and Steven Sametz, and has written a number of choral works and chamber compositions that have been performed throughout the United States and abroad. He has studied organ with Larry Allen, Angela Salcedo, and James David Christie, and studied jazz piano with Earl MacDonald.

Dan has been invited to perform organ recitals throughout the country, including at the Wanamaker Organ in Philadelphia, PA and the West Point Cadet Chapel at the United States Military Academy. He has played at national venues including the Kauffman Center, the Kennedy Center, and Weill Recital Hall at Carnegie Hall. Dan has premiered works by Morten Lauridsen, jazz bassist Rufus Reid, and Steven Sametz. He lives in Alexandria, Virginia with his wife Christen, a singer and choral director.

Andrew Brown joined the Rochester Philharmonic Orchestra in 2006 as the Third/Bass Clarinetist. He also regularly performs with the Buffalo Philharmonic and has appeared with the Toronto Symphony Orchestra, the Baton Rouge Symphony Orchestra, and the Albuquerque Philharmonic. As a chamber musician, Brown has performed around upstate New York and in New Mexico’s “Church of Beethoven.” As a member of The Eastman Broadband Ensemble, a new music ensemble based at Eastman, he has toured Europe and Mexico, participated in two recording projects, one of which was a Pulitzer-Prize finalist, and performed in the Zankel Recital Hall at Carnegie Hall.

Brown earned his Bachelor of Music Degree from The Ohio State University and master’s degree from the Eastman School of Music. He spent four summers at the Aspen Music Festival. His principal teachers have been Bob Lehner, James Pyne and Kenneth Grant. In addition to his performing activities, Brown also maintains an active studio as Instructor of Clarinet at the Eastman Community Music School.

Tickets for Eastman’s Faculty Artist Series are $10 for the general public and free to current Season Subscribers and UR ID holders. Tickets can be purchased at the Eastman Theatre Box Office, 433 East Main Street, 9:30 AM – 2:30 PM., Monday-Friday; by phone (585) 274-3000; or online at http://eastmantheatre.org