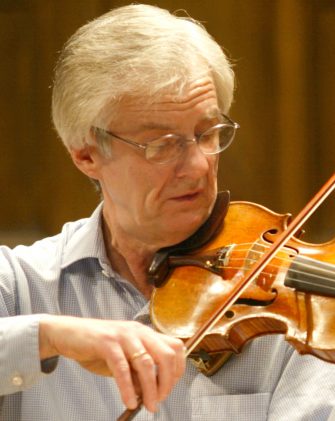 The Faculty Artist Series presents Oleh Kyrsa, Professor of Violin, along with Barry Snyder, Professor Emeritus of Piano, in a cycle of three concerts to be performed on Thursday, January 30; Saturday, February 8; and Friday, March 27 at 7:30 p.m. in Kilbourn Hall at the Eastman School of Music. Kyrsa and Snyder will be collaborating for these three concerts throughout the Spring 2020 semester to perform the complete violin sonatas of Beethoven in celebration of Beethoven’s 250th anniversary in 2020.

In October and in December of 2015, Oleh Krysa presented the cycle “The Development of Violin Concerto” in four ambitious concerts with the Symphony Orchestra of Lviv Philharmonia. The programs for these concerts consisted of concertos by Bach, Mozart, Beethoven, Bruch, Mendelssohn, Brahms, Prokofiev, Schnittke, Tchaikovsky, Skoryk, Szymanowski, and Shostakovich.

Oleh Krysa is also a champion of contemporary music, and has worked closely with Alfred Schnittke, Edison Denisov, Sofia Gubaidulina, Krzsyzstof Penderecki, Vyacheslav Artyomov, Sydney Hodkinson, Virko Baley, Myroslav Skoryk, Valentin Silvestrov, Yevhen Stankovych, and Larry Sitsky. He has premiered a number of their works, and many of them have been written for and dedicated to him.