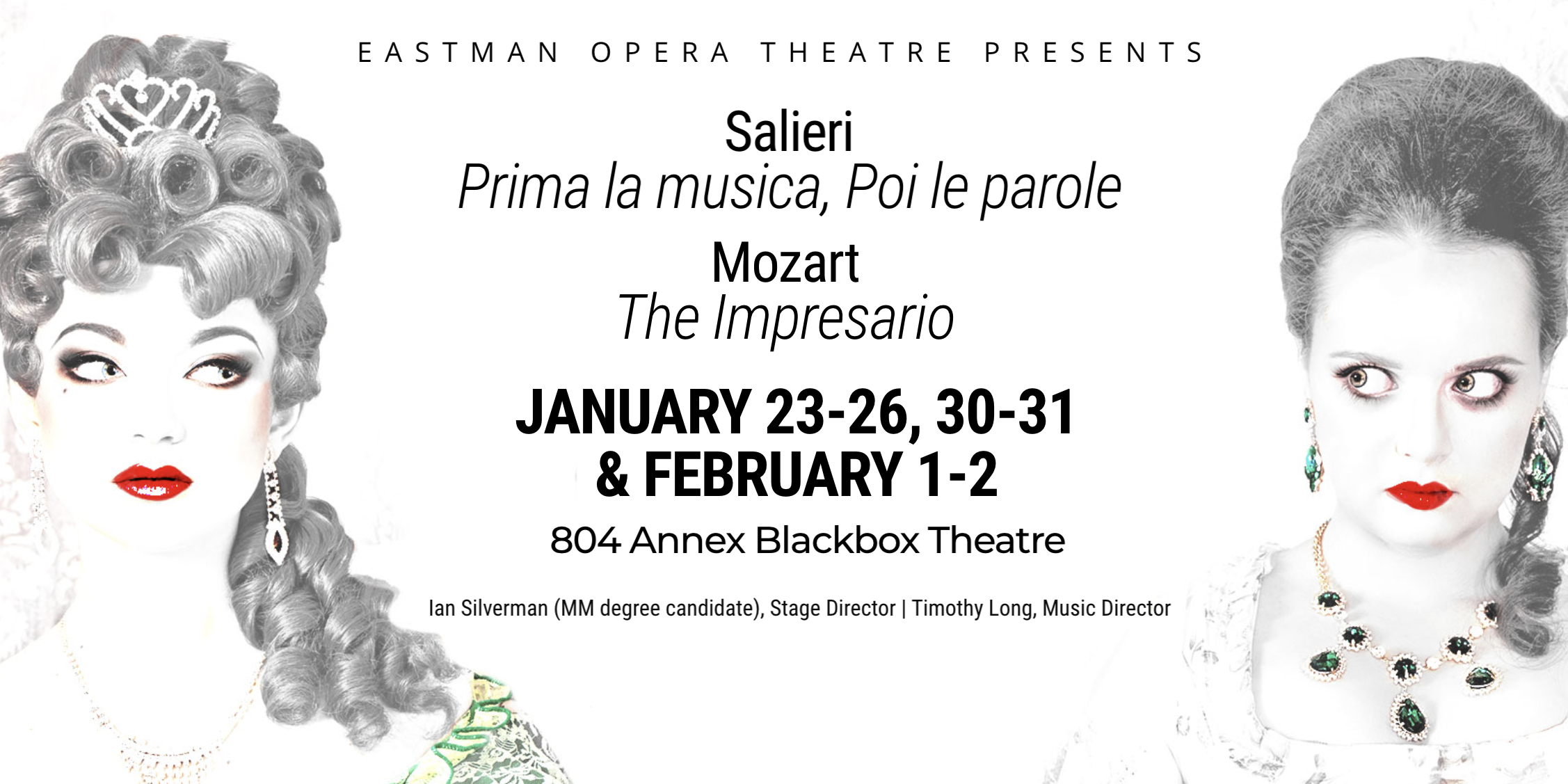 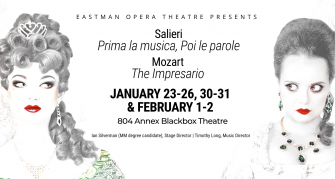 Eastman Opera Theatre is thrilled to continue its season with the double-bill of Salieri’s Prima la musica e poi le parole and Mozart’s Der Schauspieldirektor in the Black Box Theatre (Annex 804), January 25th, 26th, 31st, February 1st, and 2nd. This double-bill will be directed by Ian Silverman, Masters Candidate in Stage Directing, with musical direction by Timothy Long, Music Director of Eastman Opera Theatre. Both pieces are relatively brief, and put two comical twists on a similar story. This new interpretation of the historical double-bill features dramatic divas, over-the-top acting, and cameos of music by Gilbert and Sullivan and selected scenes from the theatre repertoire.

“Having the opportunity to direct one of Eastman Opera Theater’s mainstage operas has been the highlight of my studies here at Eastman. This is the first production that I have directed where I have the opportunity to collaborate with a team of professional designers to help create a new production.” Says Ian Silverman. “This type of experience is something that I could not have gotten elsewhere, as there are aspects of directing where you simply have to learn by doing. Professor Daigle and Professor Carr’s mentorship throughout the process has made me into a better director and it has been a joy to collaborate with Tim Long both onstage and off.  Their advice and feedback has helped me hone my craft and discover my own directing style. Both of these operas challenged me to think outside the box. I am excited to share these lesser known works with an audience and I hope that it brings them as much joy as it brought me in putting this together.”

Prima la musica e poi le parole is an Italian opera written by Antonio Salieri with a libretto by Giovanni Battista Casti. Der Schauspieldirektor is the German singspiel by Wolfgang Amadeus Mozart with a libretto by Gottlieb Stephanie. The two operas have similar beginnings, as they were premiered simultaneously at the Schönbrunn Palace in Vienna in 1786 as part of a competition.

The two short operas present two similar takes on a very familiar story: the auditions for a new opera. In Prima la musica e poi le parole (First the music and then the words) the character of the Composer is commissioned to write a new opera, but the Poet is suffering from writer’s block. In the midst of their frustrations, they are interrupted by Eleonora, the prima donna, who comes to show off her vocal artistry. Matters get worse when Tonina, an opera buffa soprano, enters and demands a role in the show. The opera culminates with the two sopranos breaking into a big fight over who gets to sing the opening aria of the opera, until the Composer and Poet step in to end their quarrel by offering them both opportunities in their show.

In Mozart’s Der Schauspieldirektor (The Impresario,), the story is brought to a new level by having not just two sopranos auditioning, but rather a whole troupe of actors and singers fighting for their spot in the new company. The Composer and Poet from the Salieri become Frank, an impresario, and Buff, his assistant, as they sit through auditions of actors and singers performing pieces from the Gilbert and Sullivan repertoire, Shakespeare plays, and other pieces from the theatrical canon. The tension rises after Madame Herz and Mademoiselle Silberklang, the two opposing sopranos, sing their audition arias and they begin to fight over which one is the better singer. Mr. Plume, an auditionee for the company, steps in to break up their catfight, but ultimately gets dragged into the middle of it. The opera ends after the two women agree to work together, and the whole company sings about how art can bring them all together.

Tickets are on sale now with $26 General Admission. $10 student tickets available. Tickets can be purchased at the Eastman Theatre Box Office, 26 Gibbs St.; by phone (585) 274-3000; or online at http://eastmantheatre.org