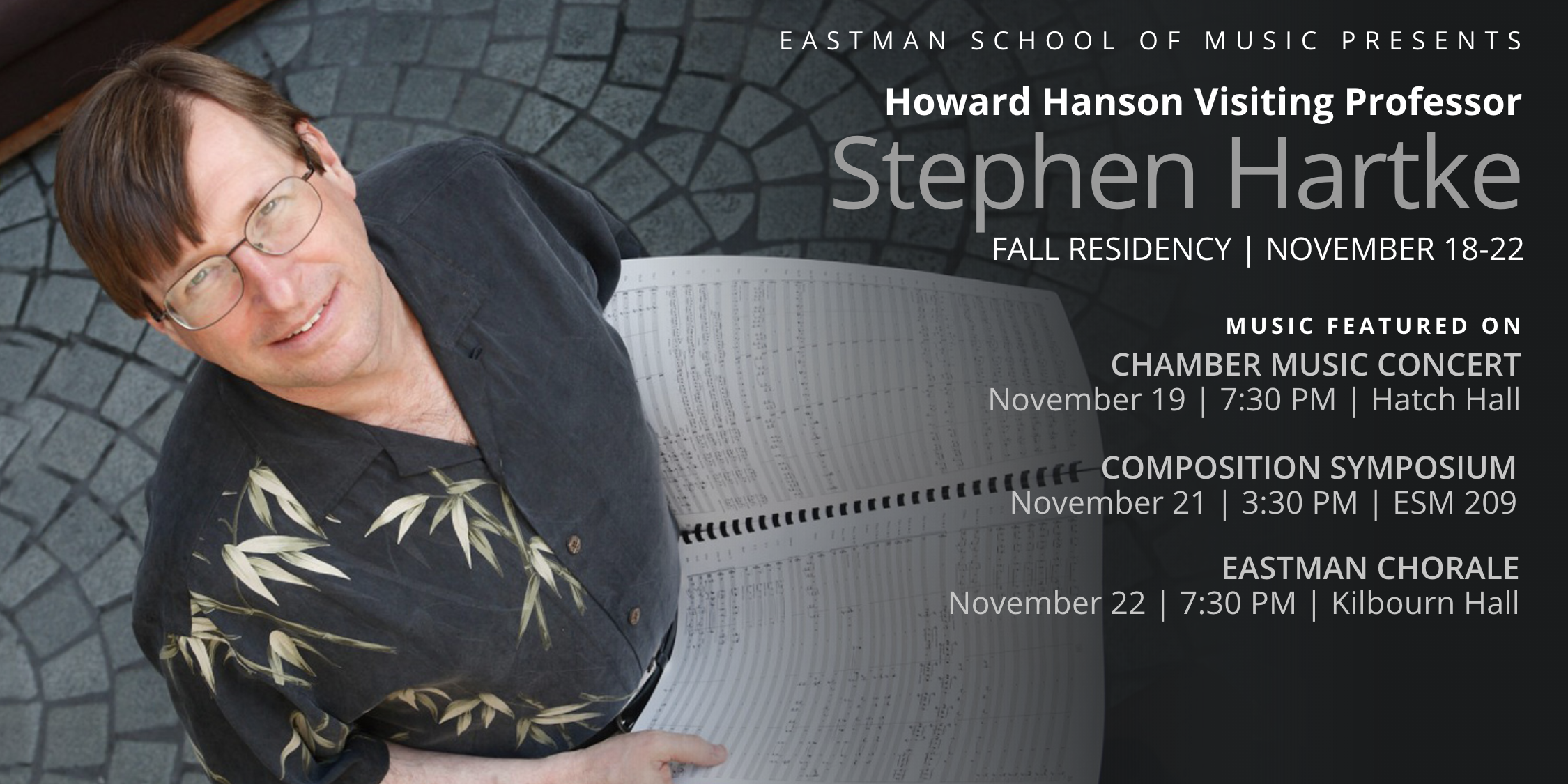 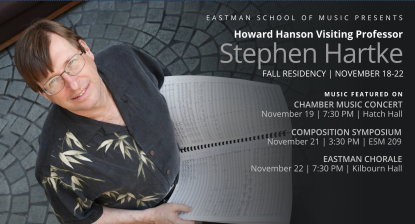 Eastman School of Music welcomes composer Stephen Hartke for a fall residency from November 18 through 23, the first of two scheduled this academic year, including having his work performed in a Chamber Music Concert on November 19 at 7:30 in Hatch Hall and his choral work performed by the Eastman Chorale on their November 22 concert. Winner of the 2013 GRAMMY Award for Best Contemporary Classical Composition, Stephen Hartke is widely recognized as one of the leading composers of his generation, whose work has been hailed for both its singularity of voice and the inclusive breadth of its inspiration.

As this year’s Howard Hanson Visiting Professor of Composition, Hartke’s professorship is a combined effort of Eastman’s Composition, Chamber Music, and Conducting & Ensembles  departments, and includes performances of his works not only by the Eastman Chorale on November 22, but also by the Eastman Wind Ensemble when he returns for the spring residency in February 2020.

“I’m thrilled to be this year’s Howard Hanson Visiting Professor at Eastman, and to have the opportunity to visit with two residencies this academic year,” shares Hartke. “It’s always an honor to have my work performed, and to interact with students of such a high caliber as Eastman’s, whether it’s in master classes or coachings, will be a true highlight for me.”

Stephen Hartke was born in Orange, New Jersey, in 1952 and grew up in Manhattan, He began his musical career as a professional boy chorister, performing with such organizations as the New York Pro Musica, the New York Philharmonic, the American Symphony Orchestra, and the Metropolitan Opera. Following studies at Yale, the University of Pennsylvania, and the University of California at Santa Barbara, interrupted by stints as advertising manager for several major music publishers, From 1987 to 2015, he taught at the Thornton School of Music at the University of Southern California, retiring as Distinguished Professor Emeritus.  He now serves as Professor and Chair of Composition at Oberlin Conservatory.

“We are delighted to host distinguished composer Stephen Hartke as this year’s Howard Hanson Visiting Professor,” says Ricardo Zohn-Muldoon, Professor of Composition at Eastman.  “Stephen Hartke has contributed a remarkable body of work that is admired for its beauty, refinement, and exceptionally vast range of emotional expression. His compositional voice scintillates with imagination and engages deeply with culture in myriad ways. Hartke is also an experienced pedagogue who at present, directs the composition program at Oberlin Conservatory. During his residency at Eastman we will celebrate his wonderful music and enjoy interacting with him in a variety of academic settings.”

Anne Harrow, Chair of the Chamber Music Department adds, “We are excited that some of our students will have the opportunity to work with Stephen Hartke, one of today’s most important composers, and to perform his fascinating chamber music.”

Hartke’s output is extremely varied, from the medieval-inspired piano quartet, The King of the Sun, and Wulfstan at the Millennium, an abstract liturgy for ten instruments, the blues-inflected violin duo, Oh Them Rats Is Mean in My Kitchen, and the surreal trio, The Horse with the Lavender Eye, to the Biblical satire, Sons of Noah, for soprano, four flutes, four guitars and four bassoons, and his recent Symphony No. 4 for Organ, Orchestra, and Soprano, commissioned for the Los Angeles Philharmonic. He has composed concerti for renowned clarinetist, Richard Stoltzman, and violinist, Michele Makarski, and his collaboration with the internationally-celebrated Hilliard Ensemble has resulted in three substantial works, including his Symphony No. 3, commissioned by Lorin Maazel and the New York Philharmonic. Other major commissions have come from the Chamber Music Society of Lincoln Center, Carnegie Hall and the Harvard Musical Association, the IRIS Chamber Orchestra, the Kansas City Symphony, the Library of Congress, the Los Angeles Chamber Orchestra, the National Symphony Orchestra, the Orpheus Chamber Orchestra, the Barlow Endowment, Chamber Music America, the Fromm Foundation, the Institute for American Music at the Eastman School of Music, Meet The Composer, the National Endowment for the Arts, and the Natural History Museum of Los Angeles County, among others.

Stephen Hartke will give a presentation about his recent work.

Program includes Stephen Hartke’s Blessed are They that Sow and Shall Not Reap, written for double chorus.