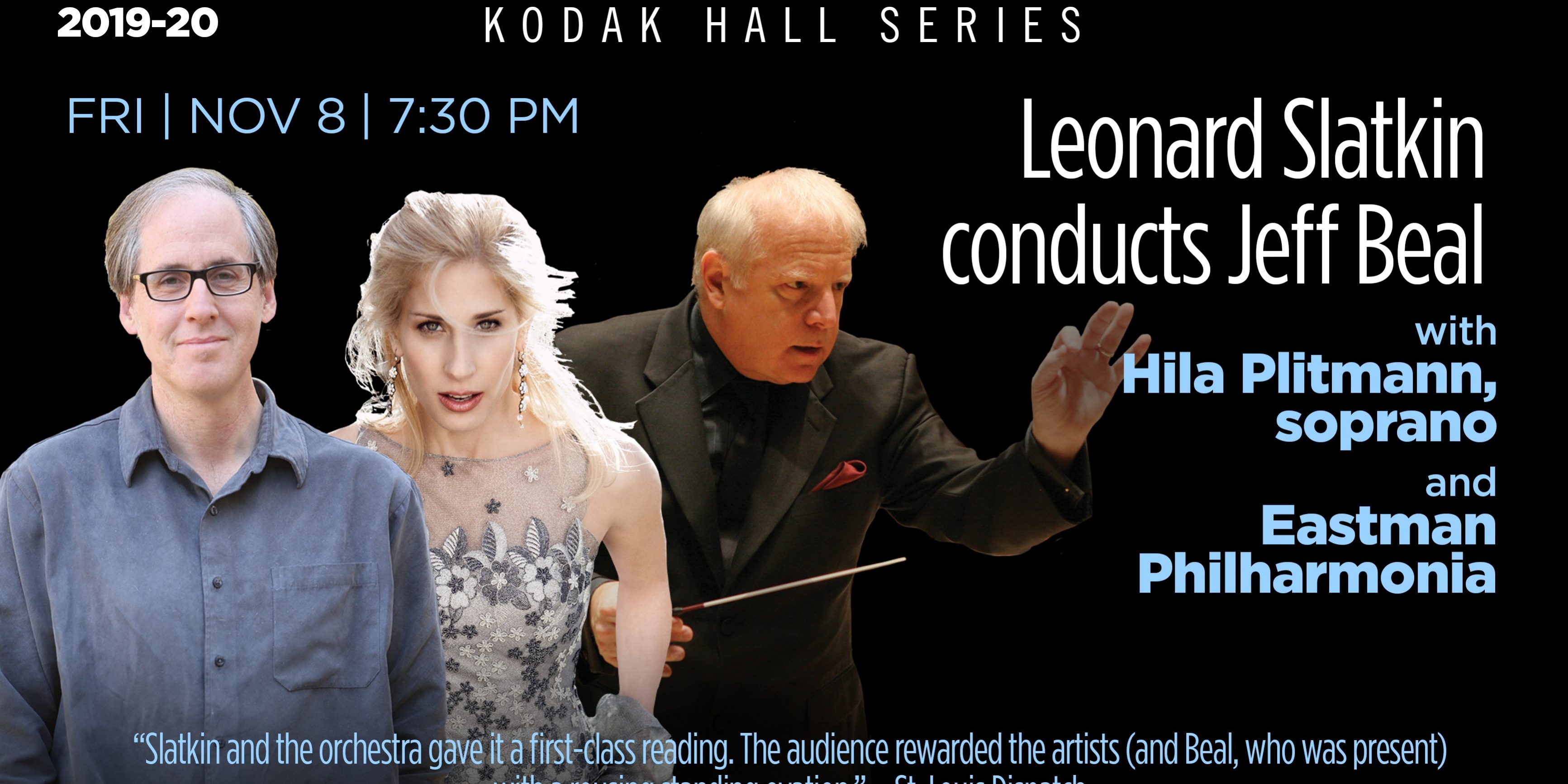 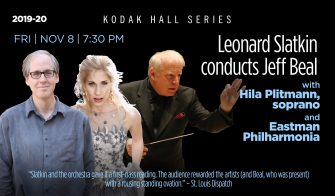 Music and movie buffs alike will be mesmerized as five-time Emmy-winning composer of music for film, media, and concert halls (and Eastman alum), Jeff Beal teams up with internationally acclaimed conductor Leonard Slatkin. Featured on the program are Beal’s most recent work, The Paper Lined Shack¸ a song cycle with soprano, Hila Plitmann, and a live music-to-screen performance of Battleground, based on stories of Stephen King and starring William Hurt– which won the Emmy for best score for a TV movie/miniseries in 2007.

This special event features the Eastman Philharmonia, the school’s most prestigious orchestra and a springboard for top collegiate music students to life as a professional musician. It is made up of third and fourth-year undergraduates and graduate students and over the years and has toured in the United States and Europe.

“I’m so honored to be returning to Eastman for this concert with Leonard Slatkin, Hila Plitmann and the Eastman Philharmonia Orchestra,” shares Jeff Beal.  “Eastman has always a place where film music could live aside concert music.  The chance to present both my live film score Battleground and my song cycle The Paper Lined Shack with these world class artists is a composers’ dream come true.”

Jeff Beal scored all eight episodes of the Battleground series. What’s highly unusual is that there is one episode that is completely without dialogue, thus giving Beal a unique opportunity to tell the story with music. Not since the 1961 Twilight Zone episode starring Agnes Moorehead has a dramatic television show aired an episode entirely free of dialogue, according to Ray Costa, Jeff Beal’s publicist.

The text for “The Paper Lined Shack” is based on a diary by Beal’s great-grandmother Della and the music tells the story of her life: finding her identity and becoming who she was. Beal says, “I read it with my wife Joan who helped me craft parts of this diary into a libretto. We both had similar ideas about the important images and parts of her life that we wanted in the song cycle.” (KDHX)

Jeff Beal is an American composer of music for film, media, and the concert hall.  With musical beginnings as a jazz trumpeter and recording artist, his works are infused with an understanding of rhythm and spontaneity. Beal’s eclectic music has been singled out with critical acclaim and recognition.  His score and theme for the Netflix drama House of Cards has received five prime time Emmy Award nominations and two statues. He has received nineteen prime time Emmy nominations for his music, and has won five statues.  Other scores of note include his dramatic music for HBO’s acclaimed series Carnivale and Rome, as well as his comedic score and theme for the detective series, Monk.  Beal composes, orchestrates, conducts, records, and mixes his own scores, which gives his music a very personal, distinctive touch

Beal graduated from the Eastman School of Music (BM 85), where he was commencement speaker and honored alumnus in 2011.  He now mentors and encourages young composers as a participant in the Sundance Film Composer seminars and as a guest lecturer at conservatories.  Beal met his wife, soprano Joan Beal (BM 84) at Eastman, where the couple donated $2 million to the creation of The Beal Institute for Film Music and Contemporary Media.

Internationally acclaimed conductor Leonard Slatkin is the Music Director Laureate of the Detroit Symphony Orchestra (DSO) and Directeur Musical Honoraire of the Orchestre National de Lyon. He has conducted virtually all the leading orchestras in the world, including: New York Philharmonic, Chicago Symphony Orchestra, Philadelphia Orchestra, Boston Symphony Orchestra, and many more. He maintains a rigorous schedule of guest conducting throughout the world and is active as a composer, author, and educator. Born in Los Angeles to a distinguished musical family, he began his musical training on the violin and first studied conducting with his father, followed by Walter Susskind at Aspen and Jean Morel at Juilliard. Slatkin has received six Grammy awards and 33 nominations. A recipient of the prestigious National Medal of Arts, Slatkin also holds the rank of Chevalier in the French Legion of Honor. He holds honorary doctorates from many institutions, including the University of Rochester.

Hila Plitmann is a glittering jewel on the international music scene, known worldwide for her astonishing musicianship, light and beautiful voice and the ability to perform challenging new work. She has worked with many leading conductors, performing with the likes of the Los Angeles Philharmonic, the New York Philharmonic and the London Symphony Orchestra. Plitmann was awarded a Grammy Award in 2009 for Best Classical Vocal Performance. She received her Bachelor of Music and Master of Music degrees with high honors from Juilliard.

Tickets for An Evening with Jeff Beal, Leonard Slatkin, and Hila Plitmann with Eastman Philharmonia are available starting at $30, with $10 student tickets available. Tickets can be purchased at the Eastman Theatre Box Office, 433  Eastman Main Street, 9:30AM – 2:30PM., Monday-Friday; by phone (585) 274-3000; or online at http://eastmantheatre.org/.