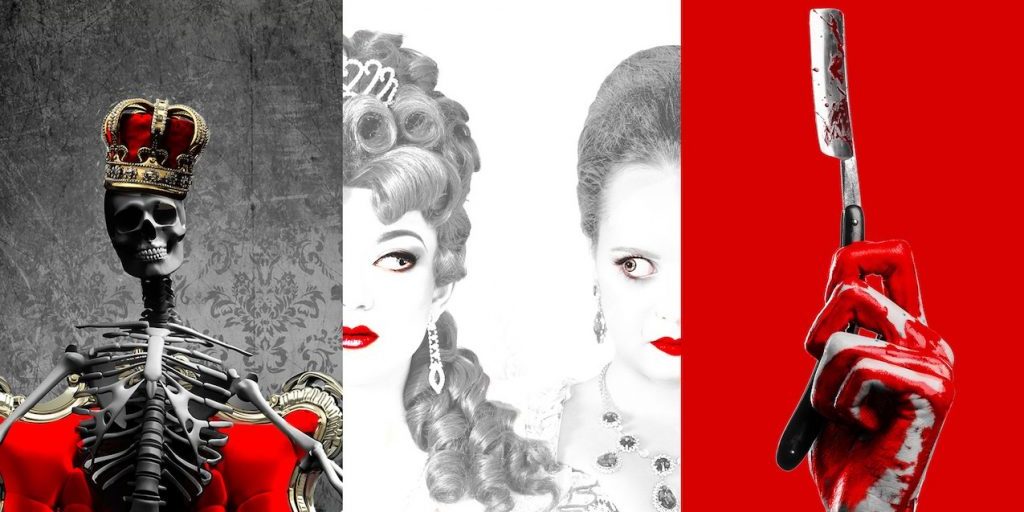 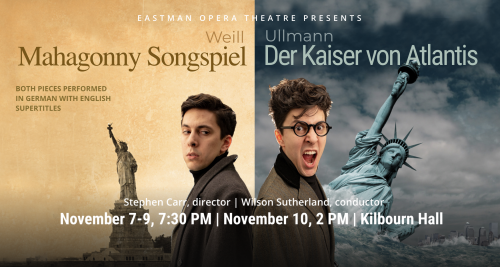 these two lesser-known operas are a unique opportunity for Rochester audiences.

“These two thought-provoking, rarely performed works should prove to be an extremely engaging double-bill for our audiences,” shares Stephen Carr, Associate Professor of Opera and Musical Theatre, and Associate Artistic Director of Eastman Opera Theatre (EOT). “Paired together in this way, the works pose some provocative questions about capitalist excess and the dehumanization of fascism.”

Der Kaiser von Atlantis was written by Viktor Ullmann and Peter Kien while the two men were interned in the Nazi concentration camp of Theresienstadt, but it was never performed in the camp. Mahagonny Songspiel was the first collaboration of Kurt Weill and Bertolt Brecht, an artistic partnership that proved to be one of the most influential of the century.

The two short operas’ mordant humor and jaundiced view of humanity have a contemporary moral and political resonance. In Der Kaiser von Atlantis (The Emperor of Atlantis, or Death Abdicates, 1943) the mad, murderous Emperor, ruler of much of the world, proclaims universal war and declares that his old ally, Death will lead the campaign. Death, offended by the Emperor’s presumption, breaks his sabre and announces his abdication: henceforth, people will never die. Confusion and misery result, as male and female soldiers from opposite sides sing a love duet instead of fighting, and the sick and suffering find no release. Death offers to return  on one condition: that the Emperor is the first to die. He accepts, and sings his farewell.

In Weill and Brecht’s Mahagonny Songspiel (1927), there is no dialogue or character development, but the songs tell a simple story, set in the imaginary country of Mahagonny, where all vices and excesses – money, sex, alcohol – are encouraged. Mahagonny attracts many visitors, but they are quickly disillusioned by their “anything goes” lives. God orders them all to go to Hell, but they protest and revolt, claiming they are there already.

Wilson Southerland will be doing pre-performance talks one hour before each performance in the Ray Wright Room (room 120), located at 26 Gibbs street on the first floor of the main building at Eastman School of Music.

Tickets are on sale now with $24 General Admission. $10 student tickets available. Tickets can be purchased at the Eastman Theatre Box Office, 26 Gibbs St.; by phone (585) 274-3000; or online at http://eastmantheatre.org