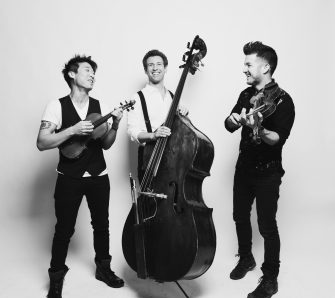 The Kilbourn Concert Series announces that Time for Three will perform in Kilbourn Hall at the Eastman School of Music on Thursday, October 10 at 7:30 p.m. Time for Three is made up of violinist Nicolas (Nick) Kendall, violinist Charles Yang, and double bassist Ranaan Meyer.

Called a “classically trained garage band.” by NPR’s All Songs Considered, Time for Three is a band that brings together different forms of music such as Americana, modern pop, and classical music into a unique voice.

Nicolas (Nick) Kendall is a violinist who started playing at the age of three. Growing up, he played on the streets of Washington D.C., playing trashcans for lunch money. He attended the Curtis Institute, where he formed pick-up bands. Kendall was trained as a violinist in the Suzuki method, which was brought to America by his grandfather, John Kendall, in the 1960s. Kendall focuses on bringing a new wave of music to new generations.

Violinist Charles Yang is the recipient of the 2018 Leonard Bernstein Award, one of many awards he has received over the years. The Mayor of Austin, Texas declared June 9, 2005 “Charles Yang Day”. Yang brings classical and popular music together to create a new kind of music.

Ranaan Meyer has been playing since he was four years old. He started out playing the piano, then moved onto the cello and then picked up the double bass. He attended the Curtis Institute of Music where he met Zach DePue and Nick Kendall, who then formed Time for Three. He has started two music camps: Wabass Institute, a double bass camp; and Wabass Workshop.