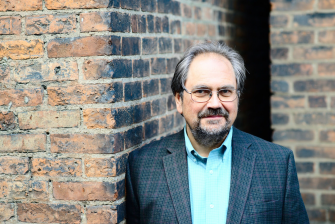 The Faculty Artist Series presents composer David Liptak, Professor of Composition and Chair of the Composition Department, on Monday, October 7th at 7:30 p.m. in Hatch Recital Hall at the Eastman School of Music. Guest pianist Eunmi Ko will be performing Professor Liptak’s Constellations (2010) and Star Light (2009), along with selections from George Crumb’s Makrokosmos I (1972) and II (1973), in an album release concert for the Innova CD Constellations, which will be released on September 27th.

Much of David Liptak’s music written very recently has explored the poetry and magical quality of stars and starlight, imagined and real. A dedicated teacher of composition students for over four decades, David Liptak is Professor of Composition at the Eastman School of Music, where he has taught since 1986.

In 1995 David Liptak was awarded the Elise L. Stoeger Prize, given by the Chamber Music Society of Lincoln Center in recognition of distinguished achievement in the field of chamber music composition. He has received awards from the American Academy of Arts and Letters and the Barlow Endowment for Music Composition, both in 2002, and he is the 2006 recipient of the Lillian Fairchild Award from the University of Rochester. Commissions for new music have included those supported by the Fromm Foundation, the Koussevitzky Music Foundation, Meet the Composer, the Mary Flagler Cary Charitable Trust, the California Music Center, and the Hanson Institute for American Music. Recordings of David Liptak’s music can be found on Bridge, Innova, Albany, Centaur, New Focus and other recording labels. He is President of the American Composers Alliance, and his music is published by several publishers, including Keiser Classical, Alfred Music – Donald Hunsberger Wind Ensemble Library, and American Composers Edition.

Ko holds a BM degree from Seoul National University and graduate degrees (MM and DMA) from the Eastman School of Music. Her primary teachers include Ick Choo Moon and Rebecca Penneys. Currently, she teaches at the University of South Florida as Assistant Professor of Piano. She serves as co-advisor of the New-Music Consortium at USF and co-director of international new music festival Dot The Line (Korea).

Tickets for Eastman’s Faculty Artist Series are $10 for the general public and free to current Season Subscribers and UR ID holders. Tickets can be purchased at the Eastman Theatre Box Office, 433  Eastman Main Street, 9:30AM – 2:30PM., Monday-Friday; by phone (585) 274-3000; or online at www.EastmanTheatre.org